“Satanic” in the company of these films is something best kept loose. While some entries featured the devil in all his nastiness, others merely featured the antichrist or a possession “by” the antichrist. Still taking it one layer deeper, maybe it was just a nasty ass demon calling the shots (under his masters will) …..Well, maybe it’s better to say a pretty high ranking one. (Was Exorcist really about the devil or just one of his powerful cohorts?) I think its fair to say that whoever was pulling the strings, was definitely in co hoots with the dark side on a major level. I’ve seen alot of films that feature demons. This list is geared more towards those with Satanic themes or “themes that involves Satan”. I believe all the choices to be rich in their own inventiveness. “The Prophecy was left out merely because it focused more on Gabriel. You’ll also notice ALOT of classics that arrived in the 70’s. Great time I suppose to get your devil on. Special mentions below – list a few more titles, that didn’t quite make THIS list

The underlying theme even with the formalities aside is pretty clear. The forces of darkness are a-plenty, so say your prayers

Not in order of ranking

01- Legend (1985)
Never was the image of Lucifer more accurate and striking as Tim Curry in Legend. The movie itself may sit better suited in a fantasy category, but film history was made when this red skinned hoof footed beast came emerging onto screen. Even to this day, Tim Curry’s beast remains unchallenged in the looks department. Maybe because his image hit so close to home. I’m much reminded of that scary classic clip art in the same vein. 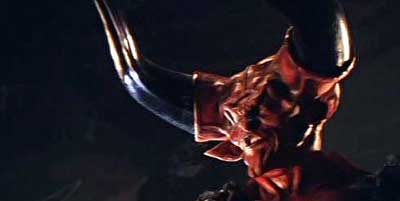 02- Mr. Frost (1990)
I can’t tell you how many lists this absolute genius of a film has been left off of. Mr. Frost easily ranks among a fav movie of all time, though still to this day it eludes a proper DVD release. The beauty of this film is in its subtlety. Can you imagine Jeff Goldblum as Satan? You will after experiencing Mr. Frost. It’s odd premise and mysterious nature make this a cult film with alot of devil things going on. 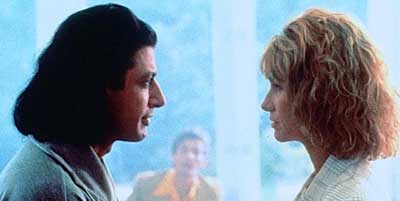 03- The Exorcism of Emily Rose (2005)
Scary. That was my first thought after viewing this. There were many critics who laid into this one, but I’d say there were just as many who loved the hell out it, so to speak. Jennifer Carpenter really embraced her possession making this a top runner in both the possessed and scary department. There were moments and body contortions that just sold me in the experience. Did you know that Jennifer Carpenter was actually double jointed providing a natural performance rather than the use of a prop dummy? The film itself was based on a case and urban legend. 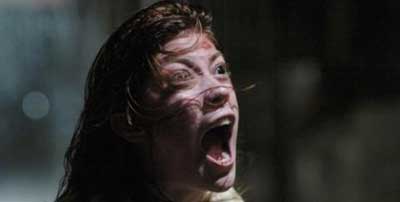 04- Race With the Devil (1975)
Peter Fonda, when he’s not riding easy…..he’s running away from Satanic cults. This movie embellished that classic 70’s fear and the public paranoia of private cults emerging. Those black hooded robes, those bonfire get togethers……let’s just say, you don’t want to piss off a cult. They’ll come looking. Not a bad film at all, but I think its more iconic of the 70’s than anything. 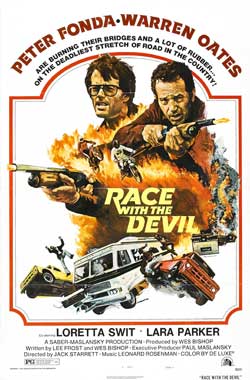 05- Rosemary’s Baby (1968)
So what’s up with Rosemary’s Baby any ways? This film creeped several generations out. I think the aspect of plotting neighbors with Satanic intentions may have laid deeper into our psyche than we realized. You never know, …that sweet old lady down the street, the one with the beautiful flower garden….yep Satan. 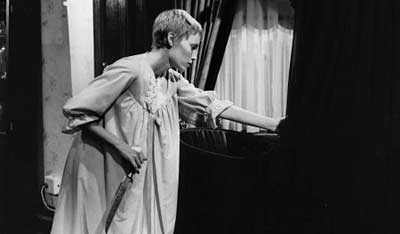 06 – Prince of Darkness (1987)
John Carpenter could be called the Prince of Darkness himself. This evil little entity of a film is oddly about a cylinder found in a church. Though this compressed evil unleashes some pretty creepy wickedne3ss when seeping out. Some great scenes as some of the church resident become possessed. Fro me, it was the devil on the other side of the mirror. As an entry, Prince of Darkness” is more of a abstract take on Satan. With the cylinder itself containing his essence. Satan is surely a part of this film claiming that HE has a father that will be released. Satan has a father? Interesting concept. The film reeks of brooding evil accompanied by a complimenting score. 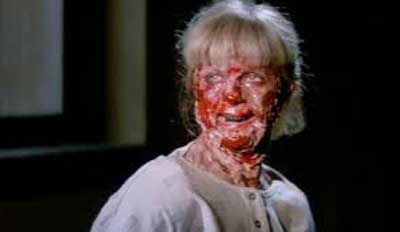 07- The Exorcist (1973) – (and associated follow-ups)
The master of all evil. Linda Blair is one hot lady, but we didn’t think so when she was spitting green goo on folks. There’s not much to say that hasn’t been said before. This movie is timeless and effective. Even with its dated special effects, it still makes us want to snuggle up with a cross after viewing. For listing purposes, I’ll say that its franchise films were not as effective but still offered layers of decent devil time. The Exorcist is sole the reason horror became popular (well I at least think so). That fear of the unknown, that fear of rogue dark spirits. Even if the Ouija board is a toy, it still is a potential means to open doors best left closed. What better warning than this experience?.

08- The Omen (1976)
Remember when we were all afraid of sinister little kids with death piercing glaze? Harvey Stephens as Damien Thorn. Now naming your kid “that”….. your asking for trouble…check, yep antichrist. I think mothers across the land starting pulling children’s back hair shortly after to make sure their weren’t any number tattoos lurking underneath. The original followed by multiple sequels was by far the most effective of the franchise. Even with a lame remake, it stands the tests of time. Why so? I think it reigned as part of the 70’s Satanic rat pack. Again those evil 70’s and it’s creation of all thing Satan-filled. Oh, ya – Satan never really shows up in Omen, just his brat little kid. 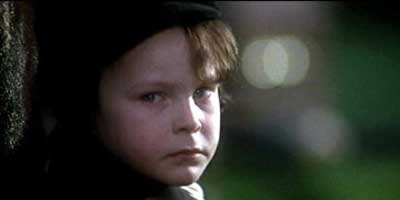 09- The Unholy (1988)
A unrealized true classic, that still to this day isn’t on DVD? Father Michael must overcome temptation and the devil himself ……. A movie with a pretty heavy Satanic vibe. The fall into hell scene is worth noting.Nicole Forher as a demon!!……hot stuff. The underlying theme here was overcoming temptation. Too good of a film not to be available….what’s up world? “The Unholy” targets Easter Vigil as day for demon resurrection. Sure, why not? 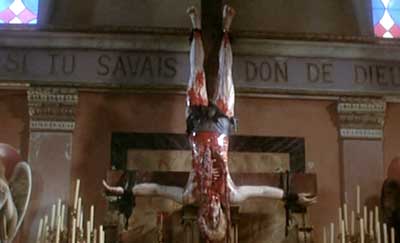 10-The Sentinel (1977)
Another favorite of mine. This film defines surreal with a cast of odd neighbors prodding it on. We later fine that some are keeping watch on the portal to hell, but not after some rather nightmarish circumstances. Very Effective, and a must see. I would have thought this to be a prime target for remake. However, it’s just fine as it is. Burgess Meredith, Cristina Raines, Beverly D’Angelo, Christopher Walken, Ava Gardner …..very nice roster of talent. The ending also provides a perfect horror setting to leave a few mental images behind.

12- The Ninth Gate (1999)
Never truer was the statement, the destination is the journey. A quirky film directed by Roman Polanski. Johnny Depp sets out to locate “The Nine Gate of the Shadow Kingdom”, a rare book that can unlock hell’s gate. The movie was great with a rather poor ending. So I love to watch it up till the last 5 minutes, which leaves me…..unsatisfied. Overall, still a great film that makes it a worthy contender in our Satan section. 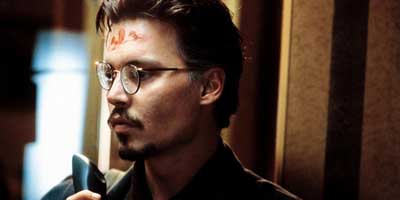 13- The Devil’s Rain (1975)
They don’t make em like this anymore. Notice that its another 1975 devil film. Devil’s Rain is one of the kings in this area. Melting faces, Satanic cults, evil beasts…..yep, a true classic in the Satan arena of movie releases. At times its a bit campy, but at others really chilling and dark. You probably wouldn’t normally classify Ernest Borgnine as a cult leader to be feared…but hey, maybe its time to dig into to 70’s old school.The film has a few surprise actors in it. Order this now, and next it tightly against your Omega man DVD.

14- Constantine (2005)
Constantine has a pretty believable Satan at film end. In fact Constantine is a demon hunter who takes on the supernatural. We have more angels vs devil plots within, but it is Peter Stormare who succeeds at making a pretty decent Lucifer. Constantine was never really a scary film as it follows in the tradition of the comic book Hellblazer. It had its flaws, but it still a pretty decent watch. Good devil stuff here though.

15- Beyond the Door (1974) – Beyond the Door II (1977)
Beyond the Door took the lead from the Exorcist and really tried its best to bring us more devil fare. At the time, Beyond the Door was striking fear into tv viewers with some really effective trailers. The film itself has weak moments but it worked enough for those wanting a semi-exorcist reboot. It might not make the same impact today, but at the time, it was nasty stuff. Let’s just say..being possessed is not pretty. 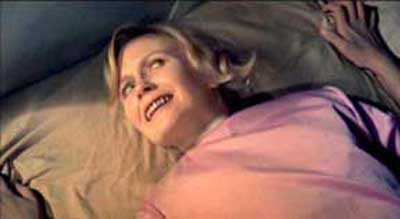 16- The Devil’s Advocate (1997)
An all time fav of mine mostly due to Al Pacino. Hey it’s Keanu Reeves in another devil film. Is he trying to tell us something? Devil’s advocate has a some surreal moments but in all its a really classy production. Great ending, great suggestion on our culture. A winner hands down. Worth seeing quite a few times. 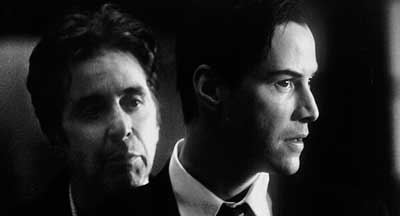 17- End of Days (1999)
Arnold Schwarzenegger vs. the devil? Yep, perfect setup for some great devil moments. The Satan rises “ending” seems awfully familiar and a chance to throw in some CGI. Gabriel Byrne really provides the Satan highlight here in a role that seems to follow him around a bit. But then again, I think we all believe that maybe Satan as a human would kind of look like Gabriel Byrne. Another film that involves a secret cult with deviant intentions. 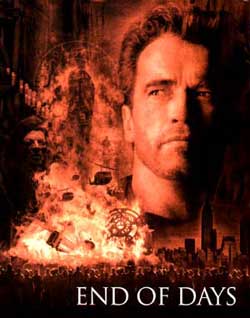 18- Stigmata (1999)
More of a religious film than any. It questions catholic morals and looks more into the stigmata legend itself. There is some serious possession going on here, not the usual style of that we are used to. Appropriate for the list focusing more on anti-church than anything. Patricia Arquette is pretty effective here, though not in the same base of “Exorcist” style films. I think its marketing confused folks a bit, but in all not a bad film.

19- Bless the Child (2000)
The clash between good and evil all surrounds 1 single child. Due to her special powers, the cult want her for their own intentions. Kim Basinger is here to make sure that doesn’t happen. Sounds cheesy, but its not a bad film at all. The idea of a cult wanting a child is a bit redundant, but the film features a great cast. I seem to forget the premise so often that re-watching it, is almost a new experience. 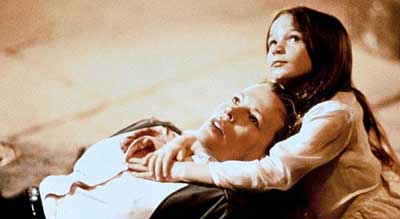 20- Angel Heart (1987)
Harry Angel is on a mission to find Johnny Favorite. Now who came up with these names? Though with cheesiness aside, its still a great thriller. Mickey is at his prime and delivers front to back. Eerie moment worth noting? Deniro as the devil slowly eating an egg (symbolic of the human soul). Deniro doesn’t get many devil roles, but Angel Heart stands as one worth remembering. 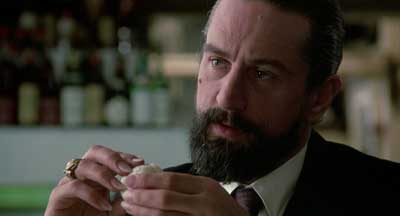 Got a few worth mentioning? We want to hear from you below!

Tags Beyond the Door Bless The Child End of Days legend Mr. Frost Prince of Darkness Satan Satanic The Devil's Advocate The Exorcism of Emily Rose The Exorcist