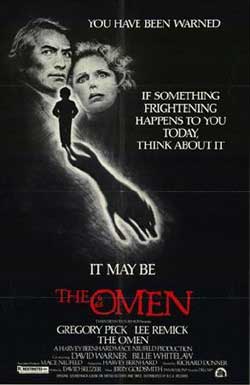 An American ambassador learns to his horror that his son is actually the literal Antichrist.

Directed by Richard Donner, from the beginning frames of The Omen, it is clear that this film is diabolically demonic with a clearly biblical singing choir based soundtrack capable of creating chills. As if that wasn’t enough to imply the film’s tone, during the opening credits, a standing male toddler surrounded by a dark evil red background, is casting a shadow in the shape of a cross. Holy and horror has just intermingled.

Thorne, looking through a pediatric window, views a nun holding up a male infant child. A child whose mother died giving birth to him. A child who Thorne has been convinced to accept since his child also tragically died while being born. However, the mother, Thorne’s wife Katherine (Lee Remick), is unaware of this substitution. 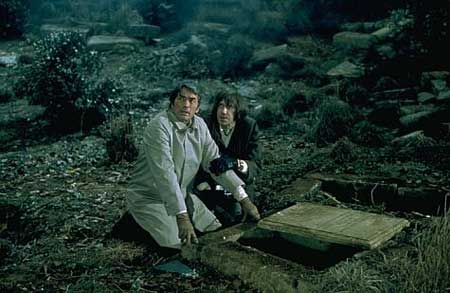 Through joyful family photos, we are fast-forwarded to Damien’s (Harvey Stephens) fifth birthday party, where the tale officially begins. As children joyously run about, Damien’s nanny notices a large dog, a Rottweiler, watching from a distance. Her voice is suddenly heard; watch me Damien, I’m doing this for you. Everyone looks up to see her standing on the large home’s upper window ledge, a noose around her neck. She leaps, horrifyingly hanging herself in front of everyone.

Soon after, unbeknown to the parents, a new nanny, Mrs. Baylock (Billy Whitelaw) comes to call, and it is clear from the get go that there is something odd about her, for she is there solely for Damien’s protection.

Over the course of time, strange events occur. The Rottweiler has now been welcomed into the home by the nanny, much to Thorne’s dismay; Thorne is approached by Father Brennan (Patrick Troughton) compelling him to accept Christ, telling him that his son isn’t his son at all and that he is actually the antichrist, which Thorne isn’t inclined to believe; During a visit to a zoo, the animals are clearly fearful of the child; Jennings (David Warner) a freelance photographer begins noticing strange and menacing shadows in the photographs he develops of those aware of Damien’s true identity, and are freakishly killed exactly as the shadow foretold.

Yet still, Thorne doesn’t quite believe.

However, when Katherine is in a tragic mishap little Damien is solely responsible for and winds up in the hospital; she implores Thorne to not let Damien kill her. Finding the request odd and after considering all the events leading up to it, he is starting to finally believe. But, he doesn’t save her as the nanny visits and pushes her out of the hospital’s sixth floor window to her death. Thorne, overwhelmed with grief, comes full circle to belief and he and Jennings begin an exploration taking them to various locations as they put all the pieces together.

One of the places, the hospital of Damien’s birth, Thorne seeks birth records. There are none since they were destroyed in a fire five years ago. However, Thorne recalls a priest, Father Spiletto (Martin Benson) that was there on the day of Damien’s birth and is informed that the priest had given into temptation, fallen from grace, and is being kept in a monastery. (This is the one proclaiming the child is dead at the beginning of the film). The priest, unable to speak, under the penance of one eye peering front and one eye peering back for his turn of faith, scribbles a single word on a parchment. That word is the name of a cemetery where Thorne will find the graves of Damien’s mother, as well as the body of his actual son, who Damien has taken the place of.

The two go to the cemetery, a gothic and eerie place guarded by an iron fence. They search and find the two crypts and slid the tops open to discover that one holds an animal, a jackal, Damien’s real mother, and the other holds an infant skeleton with a large hole in its skull. Thorn now knows his real son was murdered soon after birth. Immediately they are surrounded by vicious Rottweiler’s and must fight to get away, which they do.

The quest takes them to the one person who is knowledgeable in all this, an archeologist that has discovered the birthplace of Christianity. The man will only speak to Thorne alone and sends the photographer away. Thorne is given seven daggers, to be used to kill the child, with explicit instructions that it must occur on hallowed ground, such as a church.

After the meeting, Jennings pry’s as to what the man disclosed and Thorne conveys, but is perplexed, not wanting to kill a child. He decides against it and tosses the daggers. Jennings retrieves them intending to do the deed himself and is decapitated when a runaway truck tosses a sheet of glass. Bearing witness, Thorne realizes the truth and gathers up the daggers with intent.

Quietly he enters the home’s front door. Damien’s guardian, the Rottweiler, is aware and rises to prowl and seek Thorne. Thorne tricks the dog, locking him away and keeping him from aiding.

In Damien’s bedroom, Mrs. Baylock surprises and attacks Thorne, but he is able to fend off the attack, eventually stabbing and killing her with a pair of scissors.

He escapes the house with Damien in tow and is chased by the police for speeding as he races to the church. Holding Damien down before the church alter, Thorne, dagger raised, is shot to death by a policeman before he is able to inflict a fatal blow. 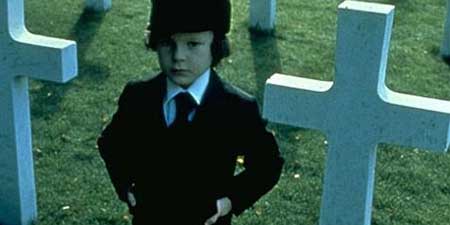 The final scene shows Damien, at Thorne’s funeral, standing between and holding the hands of a couple who will now care for him. It is Thorne’s brother and his wife, The President of the United States. Damien turns and looks at the camera, a smirk on his face.

The Omen is a film that makes a serious attempt at ranking equally alongside other demonic films such as The Exorcist and Rosemary’s Baby, but falls a bit short in comparison. However, in premise and flow, The Omen may have a slightly more frightening effect due to the immense biblical overtones guiding this film directly into the fear that many people harbor, and the gothic atmospheric architecture employed throughout. This is one of those films that some fearfully will not consider watching. For much like both The Exorcist and Rosemary’s Baby, it is a believable film utilizing actual biblical points and there is always something terrifying about that.