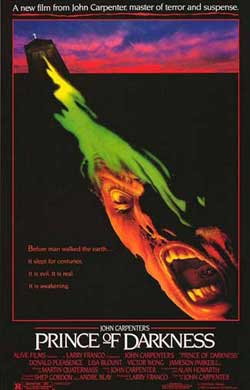 A research team finds a mysterious cylinder in a deserted church. If opened, it could mean the end of the world.

Prince of Darkness (1987), one of Carpenter’s more darker films, of which one would assume a vampire king of sorts, actually refers to Satan and his darker leader. Darker leader? Now there’s an interesting concept….an evil force that Satan serves. In fact “his” father, of whom the film refers to is called the “Anti-God”.

“Prince of Darkness” failed to gain the “kind” of notoriety that other releases by Carpenter did, however it stands as a pretty effective product (and scary at that). I do remember it being more unnerving in the setting of a darker theatre than the confines of my living room. You have to hand it to director / visionary John Carpenter for giving us something different. While we are well familiar with the dark forces of a fallen angel, there hasn’t been much in the way of dark matter itself..or in this case the purity of evil. 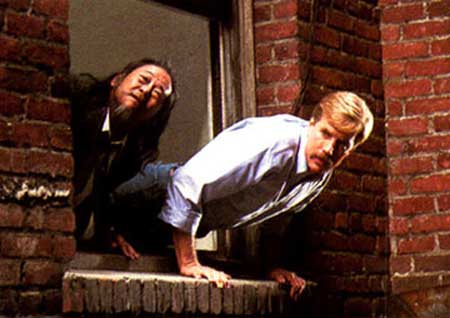 The film arrived on the pack of a multi picture deal that was offered to Carpenter. It seemed a pretty good bet with his track record in the horror genre. $3 million would allocate to each of his projects. “The Thing” and Halloween” were slam dunks…so why not a film based on science and Christianity??

A box, a key, and a dark secret hidden well beneath an old Los Angeles church. “Prince of Darkness” may be slightly ahead of its audience in that it assumes a certain affinity with the concepts of quantum physics. Maybe not text book knowledge but a certain assumption that viewers would understand matter, antimatter and how it all gels together. Now combine that underlying fact with a horror film that places Satan in a bottle as a simple form of green goo……or liquid evil…..and well….?? 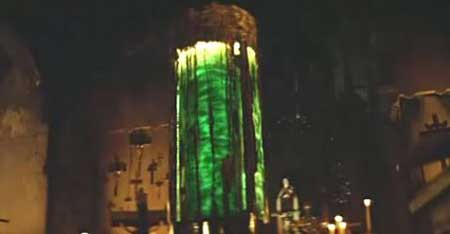 A group of investigators led by A Vicar (Donald Pleasence) and Howard Birack (Victor Wong) band together to research this mysterious claim laying dormant. With a hand full of physic students, the group seems to feel like they can take on liquid evil without recourse. The group enlists a scripture translator, a radiologist, and a Dr. The scripture translator reveals that Satan has been liquefied and stuck in a glass container while the nearby computer tries to translate Satan into data….(ya I know…pretty off the cuff)

Meanwhile as the research carries on, their seems to be some disturbances occurring within the homeless community. Led by actor / singer Alice Cooper, they start to zombifiy a bit as if under a trance. Bugs start to get jittery and evil begins to seep into the atmosphere. Now this always struck me as slightly misleading as you would think if Satan could influence the outer perimeters he would have long ago. Though it does get worse when a green mist escapes and possesses various members into murderous acts. This really kicks things up a notch (a much needed one) with suicides, transformations, and generally a bad time for all. All the while, everyone is starting to lose their marbles while evil takes over. The vagrants outside are now fully organized (a mob) awaiting anyone who steps outside the church.

Kelly seems to get the worst of it as she ends up drinking some of the goo becoming sort of a “chosen one” for demon possession. Kelly (now Satan) is able to command telekinesis while opening a portal thru a heavy mirror. The professors also begin to realize that the goo is only Satan, a servant to the antimatter god (The real chaos to come) All this relative information gets passed back and forth so much that viewers may feel a bit confused on the whole deal. The fact that Satan is unleashed seems like it might be enough…..then of course now possessing a human you would think it has al it needs to rip the place apart. Somehow into the science of it all, the control of power is shifted to a place we are less familiar with.

The ending, (which by now is not a spoiler but a well associated scene) has the aspect that all has been sort of dream or premonition that can still be prevented. In the case of Carpenter, I think it was meant to be more of a impending doom, than “there’s still time to save the world”. The film ends on a dark note which while slightly confusing was always a better alternative than a “group of physicist saves the day” type of resolve. I think if readers make the distinction early on “who is what” and “what is where”…you’ll be better off in your experience here. As a film it features one of Carpenter’s great scores (one of my favorite for that matter) and has some pretty hairy scares to contend with. The film does have a slow pace which tries to allow room for the science aspect but also ramps up in its 3rd act for a nice finale. In theme, “Prince of Darkness (1987)” begins more on a science fiction direction topping off with a move into Carpenter’s classic horror genre expertise. 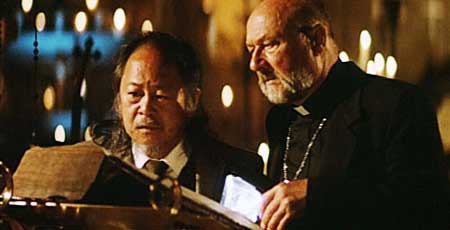 Prince of Darkness (1987) is a darker experimental take on horror mixing some unique concepts with fresh ideas. Not a prize for the mantel but still a great take on evil itself for the masses to consume. How would I rate it? It did more for me than “Assault on Precinct 13” and “Christine ” but not more than “The Fog”, “Thing” or “Halloween”