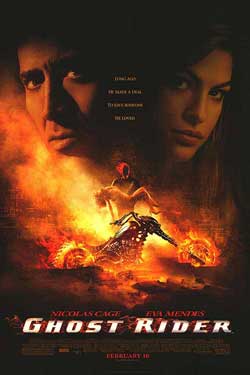 Based on the Marvel character, stunt motorcyclist Johnny Blaze gives up his soul to become a hellblazing vigilante, to fight against power hungry Blackheart, the son of the devil himself.

Johnny Blaze (Nicolas Cage) was born to ride motorcycles. Even when his heart tells him to move on and leave his circus life behind, he still can’t seem to escape fate. Though upon discovering that his father is dying of cancer, the chance to make a deal to save him is just what Johnny needed to hear. A deal is offered in exchange for his soul. Satan (Peter Fonda) has other plans for Johnny, ones that he will come calling for years later. Though during that time, Blaze has made a name for himself as a death-defying daredevil. It appears that no challenge is too much for this rider with a death wish. Each jump brings him closer to recognizing his own humanity, the kind that the devil can’t touch.

Black Heart, son to Satan arrives with bigger plans. As always ,the war of power is always in motion. The focal point though this time seems to be an age old contract containing 1000’s of souls that alluded the devil the first time. In fact, Blaze is far from the first Ghost Rider. Sam Elliott, an age old ghost rider lives his existence by the name of Caretaker. It was his choice to keep a contract with so much power out of the devils hands. Though thru the years, word of the contract has spread making it the object of ultimate power.

When Black Heart arrives with his elemental cronies (Called “The Hidden”), the devil is forced to call upon his Ghost Rider (aka Johnny Blaze). Or at least the demon that lives inside of Blaze. This Ghost Rider is actually a transformation “into” to his true demon image complete with flaming skull, flaming hands and a devil bike that defies all odds. Ghost Rider is a force to be reckoned with sporting chain in hand and an angry streak that seems to give him more power upon increase.Though it’s the presence of evil and the shroud of the night that really fuels the emergence of Ghost Rider

In back story, Blaze reunites with his teen love interest Roxanne Simpson (Eva Mendes) who he promised to run away with. Years later when she arrives requesting a interview, sparks begin to ignite.

Those of the comic book genre know all too well, that being a Ghost Rider is one type of curse that can’t be shaken. The curse  awakens during highly emotional times especially when those of anger. This type of legacy is too much for Blaze to inflict upon those he loves, which in turn makes the curse that much more unbearable.

The film debut certainly features a highly eclectic cast with some top name talent across the board. The cgi is top notch with some truly wicked effect scenes and transformations. The Elemental villains are fun to watch as they transform from solid form into their element of origin. Blackheart also has his share of touch-and-turn-others-to-corpses moments.

The film has received mixed reviews across the board for a number of different reasons. So many that fans and viewers are almost left on their own accord to really determine a proper level of satisfaction. Nicolas Cage one of the objects of discussion was found to be a choice that many didn’t feel was the “right” choice for such a beloved Marvel character.

Nicolas Cage is in fact “Nicolas Cage” in this film with several of his mannerisms popping thru to calculating precision. I’ve always felt that even if you are a huge Nicolas Cage fan (which I am), there is a strong sense that Cage just isn’t the profile of who we imagined the 2007 Blaze to be performed by. There certainly are more applicable choice with a darker sense to them and less unintended comical mannerisms. For instance perhaps Colin Farrell or someone of his style.

The saga that unveils feels a bit rushed even at 114 minutes. I’m sure though that this was more due to the studio’s and director’s attempt to keep things always moving. The latest release comes out with an extended edition which to me felt a bit more closer to what the actual film “should” have been. There was also due concern that Wes Bentley was just not the ideal villain actor. His gothy look seemed to fit, but perhaps his maturity not as much. The script balanced between appropriate and cheesy which I believe angered more fans than entertained them.

In essence “Ghost Rider” is intended to be a horror film. A superhero horror film. That essence often confused its own direction making it more hodge podge than anything. With a PG-13 rating you lose older fans (especially those who grew up on the comic series) and you confuse younger fans who like what they see, but don’t really understand enough to fully embrace. Perhaps what GR needs is the approach that the “Dark Night” embraced. A willingness not to fear going darker to really capture his tortured soul essence. After all, Satan is not campy and shouldn’t be portrayed that way. He also shouldn’t be duped so easily such as the case of the former ghost rider riding off into the sunset with his contract of souls. With a scrutinized approach and a respect for the dark side, I believe GR could have a chance to redeem itself. This chance may come knocking with th announced 2012 “Ghost Rider: Spirit of Vengeance” set to arrive.

Now for some fun facts from IMDB:

– Jon Voight was attached to the project at one point, but dropped out.

– Nicolas Cage had to have his Ghost Rider tattoo covered with make-up to play Johnny Blaze.

– The head-on shot showing Johnny Blaze crashing his motorcycle on landing after jumping a long line of trucks is identical to the famous shot of Evel Knievel’s crash after a spectacular jump at Caesar’s Palace on December 31, 1967.