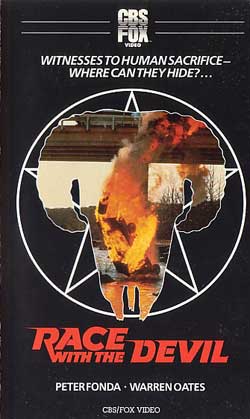 Two couples vacationing together in an R.V. from Texas to Colorado are terrorized after they witness a murder during a Satanic ritual.

Frank (Warren Oates), Alice (Loretta Swit), Roger (Peter Fonda) and Kelly (Lara Parker) are two couples out for the vacation of a lifetime. They have a fully stocked RV, complete with a color television and are heading from Texas to Aspen, Colorado, the first real vacation they’ve had in over five years.

After a long day of travel they decide to pull over for the night. While Alice, Kelly and Roger would prefer a motor lodge, Frank has other plans and wants to get away from it all, rationalizing that they are completely self-contained. With no argument from the others, he turns off the beaten path, crosses a shallow stream and pulls alongside a beautiful scenic river in the middle of nowhere. 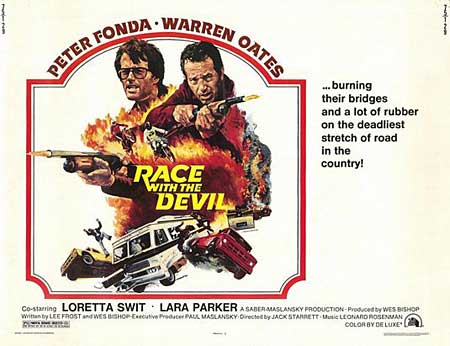 After sunset, Frank and Roger, sitting outside having drinks, spot a large bonfire on the other side of the river beside a completely bare and decrepit looking large tree. They sneak closer for a better look and inadvertently pay witness to a devil worshipping cult committing a human sacrifice. Just after the stabbing, Frank’s wife Alice opens the RV door and yells for him, drawing the attention of the cult.

They tear out of there with the cult members swiftly in tow, getting stuck for a short time in the stream they had previously crossed, but soon manage to get back on track as a couple of cult members smash the rear window and is fought off. 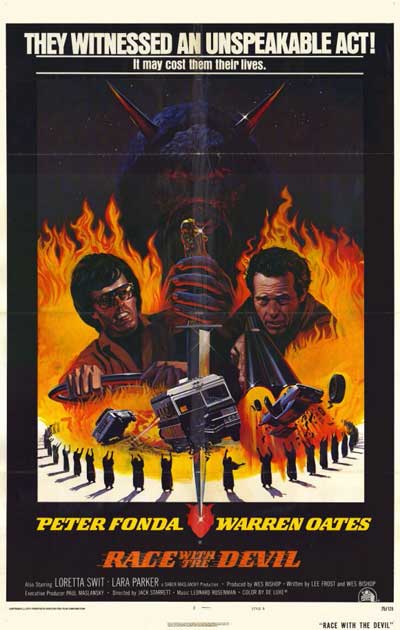 The following day they take their tale to Sheriff Taylor, (R.G. Armstrong), who seems to not believe and requests that Frank and Roger accompany him to the scene of the so-called crime. Nothing but a dead dog is found and neither Roger nor Frank trust the sheriff. Roger, unseen, gathers his own evidence in the form of blood, intending to take it to the “big city” police department in Amarillo to obtain the truth.

Meanwhile, Kelly and Alice find a note with odd symbols stuck to the back window glass shards. They decide to find a library and decode it, finding that it is a rune or witches spell warning that if they were to bring harm to the coven, harm would befall them nine-fold.

The sheriff and his deputies complete their investigative work and suggest a mechanic at the edge of town to fix the broken window, which Frank takes him up on. Soon, the couples are back on the road and that evening stop at a motor lodge filled with travelers. Kelly and Alice decide to try out the pool. While there, Kelly notices that a number of people are staring wickedly at her and they cut the swim short. After getting back to the RV, a couple parked beside them suggest a place where the steaks are great and hesitantly they all go to dinner.

Upon return, Kelly finds her little dog hanging dead from the RV’s door and begins screaming. A cluster of people mill around, but none dare say a word and simply stare. The couples hurriedly leave and continue on down the road. 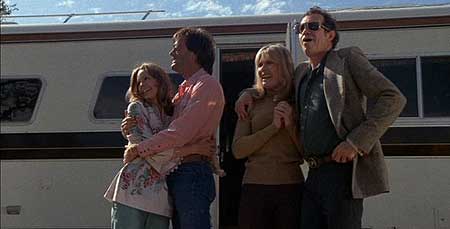 As they are traveling, Alice offers to make coffee and opens a cupboard door to find a large rattlesnake. Chaos ensues and Frank wrecks into a tree, tossing a second rattlesnake about. After a suspenseful battle with the serpents, including one biting and clinging to Frank’s slacks, the snakes are killed. They wait until daybreak for repairs, intending to drive non-stop the one hundred and some odd miles to the interstate. Stopping for gas along the way, Roger finds the payphone out of order and Frank purchase’s a shotgun. 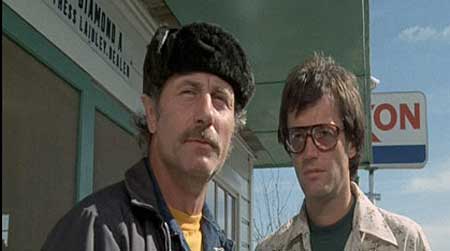 They come upon an accident scene involving a school bus and Roger tells Frank to slow down. Frank doesn’t buy it, “not a school bus on Sunday!” and drives through. Three trucks give chase and attempt to box the RV in and are successfully fought off, breaking the headlights in the process. With darkness growing quick, they decide to get off the highway until morning and take a dirt road to a secluded spot.

Feeling that the worst is behind them, the couples relax and begin celebrating. However, the joy is short lived as the peer out the window to find that the RV is now in the center of a ring of fire, surrounded by chanting cult members led by Sheriff Taylor. 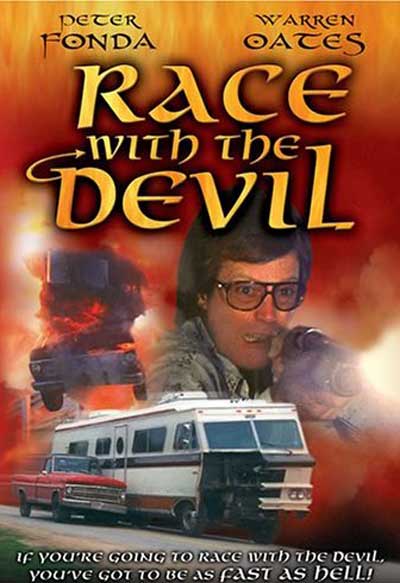 While this fast paced film certainly doesn’t rank up there with say…Rosemary’s Baby or The Exorcist on the pure horror scale, it still has that creepy demonic feel and to anyone who finds the occult frightening, this film will chill…especially during the last terrifying scene when the tale comes full circle.