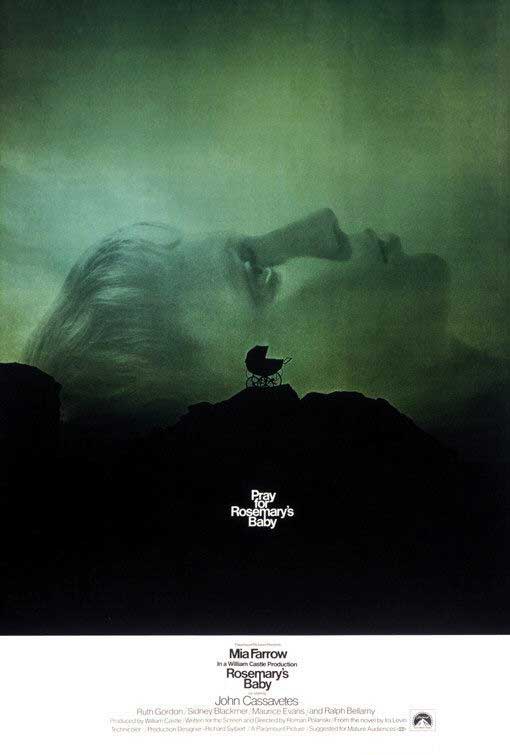 “Rosemary and Guy Woodhouse move into an apartment in a building with a bad reputation. They discover that their neighbours are a very friendly elderly couple named Roman and Minnie Castevet, and Guy begins to spend a lot of time with them. Strange things start to happen: A woman Rosemary meets in the washroom dies a mysterious death, Rosemary has strange dreams and hears strange noises and Guy becomes remote and distant. Then Rosemary falls pregnant and begins to suspect that her neighbours have special plans for her child.” (courtesy IMDB)

From the opening aerial shot of the Dakota Building – the backdrop to Ghostbusters (1984) – accompanied by Mia Farrow‘s haunting lullaby drifting through your consciousness, you know there’s definitely something wrong in New York City. Roman Polanski‘s 1968 Rosemary’s Baby (1968) is a frightening movie experience, not so much from the aspect of what you see, rather what you don’t see. Many lessons from the Hitchcock school of disorientation are employed here, as a young couple embark on the birth of their first child in new surroundings infamous for a history of death and witchcraft. 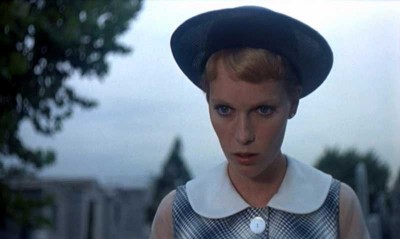 Mia Farrow is perfect as the diminutive young hopeful Rosemary Woodhouse (a role originally intended for Tuesday Weld), soon finding herself surrounded with diabolical secrets that even her loving husband Guy – John Cassavetes fresh from his Oscar-nominated performance in The Dirty Dozen (1967) – seems to share. The reason the film still affects viewers today is Polanski’s ability to build psychological tension with very little trickery or fancy effects. Our happy couple’s almost perfect relationship is slowly chipped away after befriending the inquisitively hospitable couple next door, Roman and Minnie Castevet (Ruth Gordon’s Oscar-winning performance). 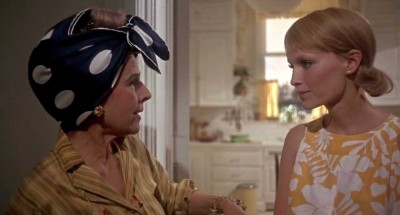 Originally against having anything to do with the two eccentric retirees, Guy now wants to spend every waking hour with them, soon encouraging Rosemary to have that baby she’s always wanted, as well as forcing her to accept the constant flow of ‘help’ offered by the elderly couple. A chain of events, however, has Rosemary thinking foul play. Why has her normally unemployed actor husband suddenly found constant work? What really happened to the young girl who recently killed herself while she lived with the generous Castevets? What was the meaning of that strange dream on the night of her baby’s conception (involving ritualistic sex with a monster)? Why does she look so sick when a mother-to-be should be glowing with health? 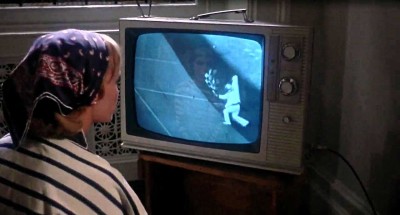 Abused and suffering, Rosemary undergoes a variety of torments, none of them especially frightful, but each one helping to build up to a veritable crescendo of uneasiness. The ultimate exploitation is of Mother Love (that great American verity) itself. Rosemary finally gives birth to the Devil’s child and accepts it, putting it to her breast. This is a nasty, clever, entertaining movie about the abuse of women, a kind of feminist document in a perverted sort of way. 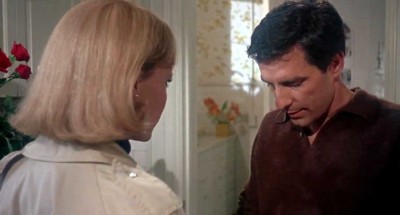 The DVD I watched had only two special features, although in this case they are truly worthy of being called ‘special’. First up was a retrospective trio of interviews with co-producer Robert Evans, designer Richard Silbert and director Roman Polanski. This revealing collection discusses how Evans lured Polanski to America by originally asking him to make a skiing flick. It also tells how Polanski thought that Rosemary should be a healthy ‘milk-fed all-American girl’ like Tuesday Weld, while it was Evans who pushed for Mia Farrow.

Alongside this is a second documentary made in 1968 entitled Mia And Roman. It’s a psychedelic slice of the late sixties in which we see Farrow paint her trailer all hippy-like, and we witness Polanski racing cars and learning fencing while he sings the praises of Los Angeles as a wonderful opportunity – sadly just months prior to losing his wife Sharon Tate at the hands of the Manson family. Watch as Farrow shows us her own monogrammed deck-chair for her cat and sets up a wall chart stating who was nice to her each day of shooting. Madness? Perhaps, but it’s a fantastic insight, with never-before-seen footage, for a whole new generation of fans of the movie and director Polanski alike. 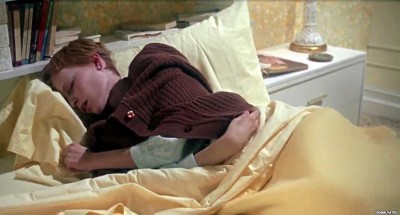 Rosemary’s Baby combines just the right amount of Euro horror and contemporary Hollywood flair, resulting in a believable tale of the supernatural that could have easily been dismissed as silly. Instead it is a polished and eerie excursion into the idea that ultimate evil may be living ‘just down the hall’. Polanski’s constant flow of small clues and clever dream sequences, too brief to allow an audience time to fully comprehend – a technique copied five years later in The Exorcist (1973) – turns this simple supernatural thriller into a fully-fledged horror film that hardly sheds a drop of blood. Anyway, please join me next week when I have the opportunity to tickle your fear-fancier with another feather plucked from that cinematic ugly duckling known as…Horror News! Toodles! 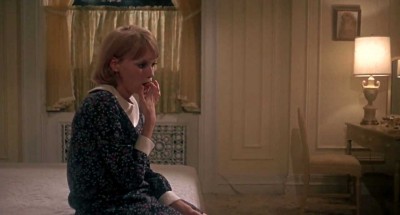