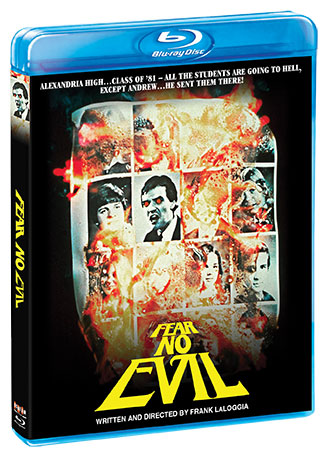 High school student turns out to be personification of Lucifer. Two arch angels in human form (as women) take him on.

The 80’s delivered a hand full of pretty decent devil-themed movies. Among that crop was a quirky imperfect release titled: “Fear No Evil“.

“Fear no Evil” was never considered a true classic but is still remembered for its aggressive and inventive advertising. 2 of its tag lines at the time were: “Alexandria High… class of ’81 – All the students are going to hell, except Andrew… he sent them there!” AND “Meet Andrew. The Road to Hell is paved with his victims”. It was these ads that most likely prompted attendance over pure satisfaction from the film itself.

The film begins as Father Thomas arrives at an old rubbled cathedral to do battle with Lucifer. Thomas who is called by his true name of Raphael wishes to rid the world of Lucifer’s influence. You don’t have to look too hard as the possessed body fashions some nifty Eddie Munster hair and fangs. Actually in this case, Lucifer is prepped and ready to belt out a swing tune while doing his best Stray Cats performance……But kidding aside, Lucifer is momentarily defeated only to enter in the young should of a new born by the name of Andrew John Williams.

Things don’t go so well as his parents prepare him for baptism. 18 years later, the somewhat nerdy but highly brilliant Andrew finds himself in high school. He is already showing signs of power as a result of the prophesized 2nd coming of Satan. The local for this event is New York of which Andrew attends a high school full of stereotypical youths up to no good. 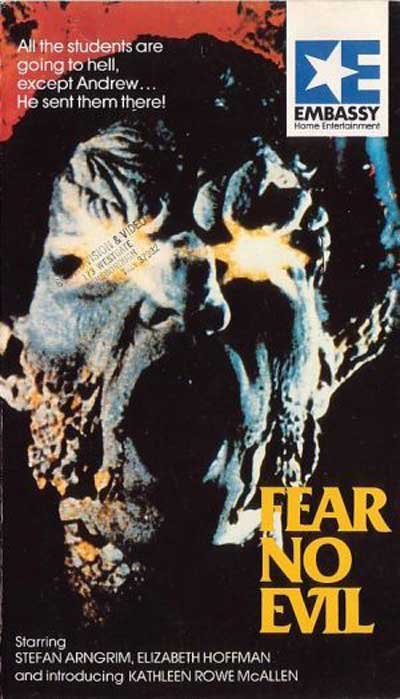 Andrew on the most part keeps to himself. He shows reserve, patience, and excellent academical knowledge. His demeanor is only short lived as the elements of a typical high school begin to confront him. In particular is a wise-cracking Italian deviant named Tony Indavino (Daniel Eden) and a jock named Mark Landers (Paul Haber).

This film is what I call a “reverse teenage angst movie. Andrew is excelling in school, is powered by the devil and despite the common ridicules he gets is able to inflict the power of the devil back at them. His devil side emerges when his emotional level increases. He is also able to seduce the girl of his dream just by touching her. So in my perspective, he’s doing ok for himself. I’m not sure why the devil chose such a wimpy looking shell (Stefan Arngrim) but he does tend to give off a “I could be Satan” aura about himself (meant as sort of a pun, of course)

Much of Andrew’s vengeful moments are kept within the school gym, including a rather homo-erotic moment with Tony Indavino being forced into an extended make out session after an attempted ribbing. This subtle element of gayness continues a second time in the film with Tony sprouting some tits and being pulled in “again” for an encore embracement. Even Andrew’s version of the devil comes across as “fancy” fashioning a night gown looking dress. In all though, if that was the intention it’s still kept pretty convert under the zombie-rising possession moments.

Through out the film an underlying motive plays out behind the scenes. Rapheal and his 2 cohorts who are now in human form prep for the battle against Satan. Honestly I got a bit lost at times in their dialog exchanges, so for the record, we’ll just say that they were well aware of his coming.

“Fear No Evil” while keeping in the tradition of 80’s teenage centered films, manages to throw in alot of ideas while leaving some big gaping holes along the way. The FX work at the end looks downright silly to us now-a days, but was adequate for the times. Probably most annoying was that we really didn’t get much on “why” Andrew was chosen to be the devil’s host. 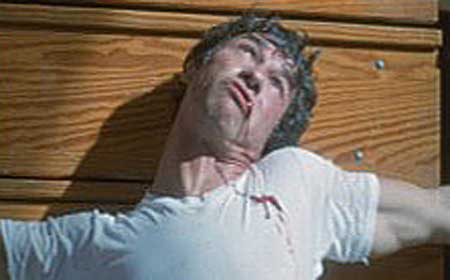 It’s far from perfect but still radiates a certain appeal to era genre fans. If you don’t need a perfect scenario and enjoy the messiness, you might find this to a be a entertaining film.