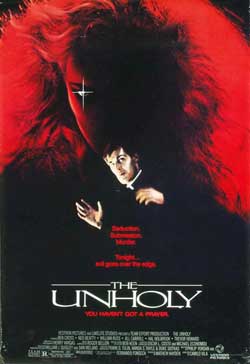 Two priests have been brutally murdered at St. Agnes church. Now the unholy reigns, only to be challenged by the purest of mortal souls. Father Michael, believed to be spiritually blessed, is appointed to the ungodly Parish. His ultimate test is a confrontation with the demon in a battle to the death.

“The Unholy” (1988) might quite possibly be one of my most sought after 1980’s horror films. While the movie has long been available overseas (region 2) (2007), it never has been given a suitable DVD release in the US. I remember a conversation a few years back when Synapse Films was considering taking over the title, however as I remember, there were some issues in the licensing and purchase price.

None-the-less, it still stands as a great piece of work that will eventfully find it’s way back into homes. This way of thinking eventually delivered other gems like “Damnation Alley ” and “From Beyond“ to our DVD closets.

In “The Unholy”, a beautiful siren of a demon sporting ketchup red-hair is bent on tempting one priest after the other at a local church. Father John Michael (Ben Cross) has been selected by the Arch Bishop and the clergy to parish this “same” church after he was pushed out a  high story window and survived without a scratch. The Arch Bishop believes John to be the chosen one or one who is spiritually enlightened. 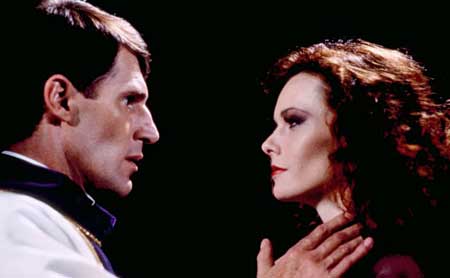 We find that Father Michael is in fact the 3rd priest assigned to St. Agnes church. The former being Father Dennis, and father Collins who proceeded him. Each have died violently per way of their throats being ripped out. Local detectives are stumped with the incidents leaving no clues or criminal motivation behind to draw from. Ned Beatty plays the role of Lt. Stern. 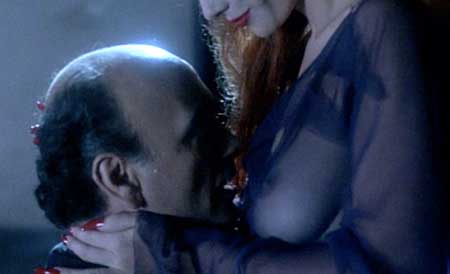 Father Michael, like the 2 before him follows the trails hoping to lead him to answers about what really happened. This is when he meets Millie (Jill Carrol), a local waitress who works for a theatrically trendy Satanic bar under the leadership of charismatic businessman Luke (William Russ). Luke often provides much of the Satanic influence to the staff and crowd with live “faked” sacrificial showcasing. 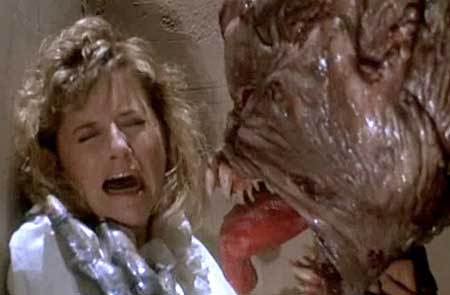 Luke begins to indulge by playing head games with Father Michael by inviting him to watch over him one night as a spirit enters and trashes the room. Millie, pleas for help but leaves a trail of suspicion when Michael discovers that her performance is an exact repeat of a previous documented journal that Father Dennis left behind.

It soon becomes pretty apparent that dark forces are at work here that are intent on claiming the lives of whoever it can tempt. “Especially” men of cloth and church. 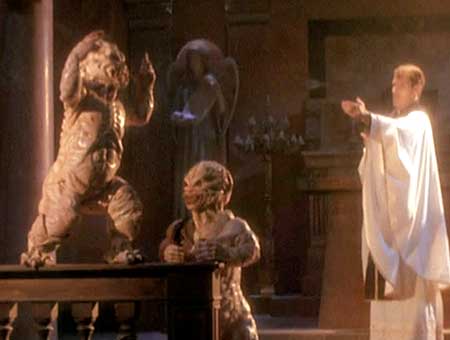 “The Unholy” works with its simplistic approach of one ambitious priest versus the throes of evil. Actress Nicole Fortier provides a high level of sexuality to the film with her seductress demoness appearances. Often she appears half naked with her memorable blowing red hair. Simply credited as “demon”, we never doubt her evil intentions with flashes of her true form hinted on the screen.

Nicole Fortier to date has only appeared in 2 films, the 2nd being 1987’s “Scared Stiff“. No other information is available. The original release, though deemed not a horror film by the director, was released by Vestron Pictures. 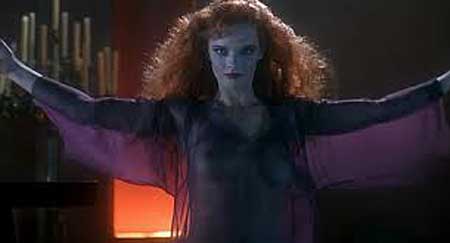 I was taken back this time in viewing wanting to ask the question, how did a church allow such creepy statues to ornate its altar? I’m sure you’ll get my drift on this issue. It is explained that the piece was imported from an overseas church that had caught fire.

One of the more memorable scenes from this film is a decent into hell that Father Michael must endure when fed a piece of demon flesh. It’s still limited by 80’s technology, but provides a brief horrific smattering of visions.  FX wizard Bob Keen is the master mind behind the final demon. Though while the craftsmanship here was pretty decent, it’s had some issues with movement making it appear clumsy and awkward during the final acts. Nowadays viewers might roll their eyes back a bit, however it just reminds me of retro 80’s film fun. 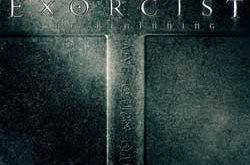 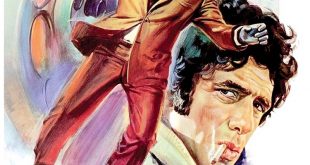