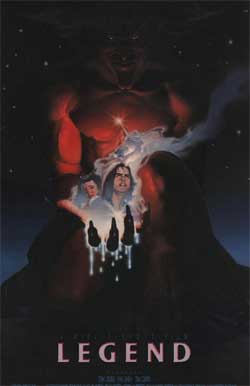 A young man must stop the Lord of Darkness from both destroying daylight and marrying the woman he loves.

“Loved by the Sun”, that memorable tune by Jon Anderson that stays with me every time I see this film. Packaged with some great score music by Tangerine Dream..it can only mean the fantasy Ridley Scott directed film, “Legend”. “Legend” might have the single most surprising factor attached to it in horror…………a great ominous dead-on version of Satan that is not intended to scare. Maybe I’m jumping the gun here as this film is certainly not “just” about Satan. In fact, this red skinned towering giant garnishing horse hoofs and 2 intimating black horns is referred to as “Darkness” in this release (basically taking all religious affiliations out of the game).Though costume aside it’s really actor Tim Curry’s unique facial structure and grin (aka Rocky Horror) that makes this character work. 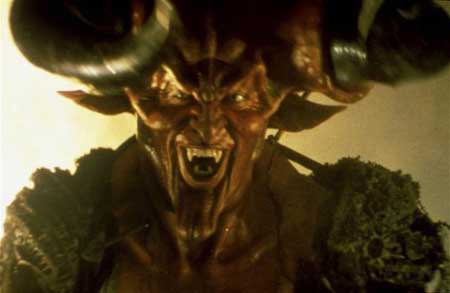 The film was set on a simple premise. Darkness wants to rule the world and cover it in a blanket of pitch black nastiness. Light “must” prevail (the classic struggle).

Despite some viewers opinion about Tom Cruise playing little boy “Jack o’ the Green” hopping about like a tadpole, he does an ok job in this early role. I think the “oh it’s Tom Cruise” factor kicks in upon watch, but quickly fades into the epic of this brilliant cinematic piece. 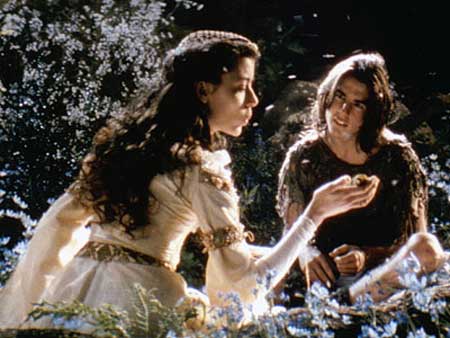 So what is “Legend“? I think its safe to say that most have seen this film or at least seen its imagery at some point. It’s toted as a fantasy, adventure, romance that takes the common stance of light vs darkness. But to be more specific, it’s the entity of darkness wanting to reclaim its origin (that is before the world was healed by the sun).

Traditional storytelling runs though out its structure bringing us back to the tales of old. It is a setting of unicorns, goblins, fairies, demons and folklore. And despite all of the fantasy films that have been created over the years, this one is probably the closest to the experience of opening up an old children’s book and reading it out loud. The film is bathed in beautiful scenery and elegant set decor that simply “feels” like you’re in the right place. 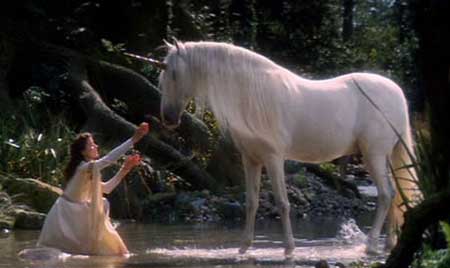 We begin on the note that darkness has migrated to an underground lair due to “the power of light” through out the surface world. However bored, lonely, and anxious “Darkness” plots to change this. He sets his sights on the presence of 2 unicorns who protect this “power of light”. Using his servants “Blix the goblin” and his nasty cohorts, “Darkness” commands them to bring back the unicorns horns so that he can roam freely casting out sunshine forever.

On the flip side, we have innocent Princess Lili (Mia Sara) frolicking about and spending time with her forest friend Jack. Jack prompts her to accompany him in the interest of showing her the unicorns. However the unicorns run off which Jack thinks it due to her presence. Lili, in an act of promise throws her ring into the pond proclaiming that she will marry the finder of this ring. Most of us know this great scene where Cruise jumps in and emerges against a lake of ice (the goblins have severed the unicorns horn causing the world to freeze) 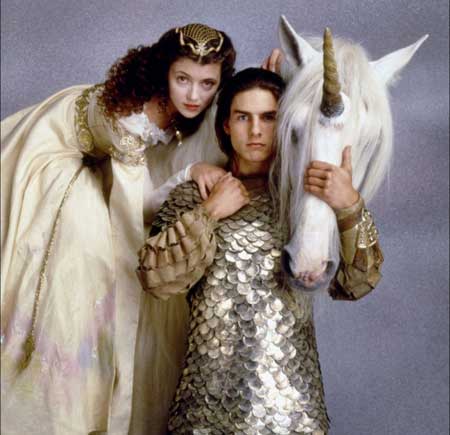 This begins our quest of which is easy as saying the world must be healed and darkness must be defeated before claiming it for good. While the surface sets their blame upon Lili for the sudden freeze over, they later discover that Jack must venture into the underworld to reclaim the horns. Jack is accompanied by his surface friends: Honeythorn Gump (the elf), Oona (fairy), Brown Tom and Screwball (the dwarves). Brown Tom volunteers to watch over the damaged unicorns while Jack heads underground. Meanwhile Lili has been captured with her mare by the snide brooding goblins who take her down into the underworld to their master “Darkness”. “Darkness” proceeds to try and enchant and seduce Lili into being his bride. The sequence is stunning to watch and surreal in many ways as she becomes a transformed Goth version of herself. As the night grows nearer to wiping out the sun for good, the team plots a mission that will deliver rays of light into the underworld taking down “darkness” and giving Jack the opportunity to reclaim the horns.

It goes without saying that the premise is built upon light overcoming darkness (as with many fair tales of this nature).

In summary this piece is one of cinema’s mainstays. It does have its slow or sleepy parts but also it is such a great fantasy film that you tend to overlook those issues. I’m not a huge goblin and wizard fan, but I do acknowledge great cinematic achievements when they are introduced. “Legend” is one such piece. 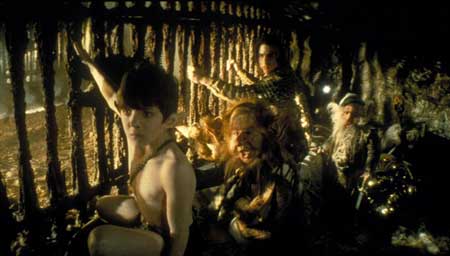 Alot of interesting facts surround this particular legendary film production. Scott’s vision was pretty clear and upon offer it to Disney, they became intimated by its dark tones and passed on it. It was eventually picked up by Universals Pictures. The set was originally planned for Yosemite National Park but ended up being built “in house” to save on money . The construction took about 14 weeks, as reported.

Curry was reported to have had issues with the rather large prosthetics he had to wear. The horns which wear made of fiber glass began to wear on his neck due to their massive size causing neck strains The pieces were redesigned to accommodate a lighter material that was less intrusive. Though the makeup process still ran over several hours to completion. 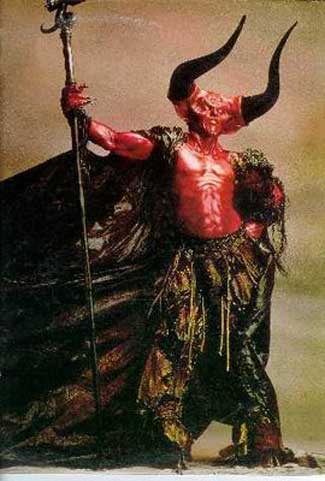 It is worth nothing that the original cut ran 125 minutes of which was trimmed down to a more accessible 89 minutes when shown in theatres. 2002 dates the release of a 113 minute director’s cut with many of the restorations in place.