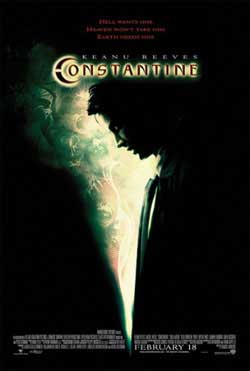 Based on the DC/Vertigo Comics series Hellblazer, Constantine follows the story of John Constantine (Keanu Reeves), a man with the ability to see demons, angels and half breeds of both. He spends his time vanquishing demons that cross the line of acceptable from Earth back to Hell, usually by way of exorcism. That is, until he sees fully fledged demons crossing into the Earth plane outside of humans, a supposedly impossible feat. It is then that he is approached by Angela Dodson, an LAPD detective with a dark past of her own. Together, they must unravel the mysterious events that follow to save themselves and the world.

Constantine is an enjoyable supernatural horror thriller with a cast that lends itself well to the plot. Keanu Reeves’s generally cold, steely façade makes him an excellent choice for the role of the cynical, sarcastic John Constantine. Rachel Weisz plays Angela Dodson, the seemingly doubtful LAPD detective whom we later discover had visions of her own in the past. Shia LaBeouf in the role of Chas Kramer adds some comedic value to the film. Tilda Swinton is wonderfully androgynous and devious as Gabriel, archangel, and aid to Mammon, son of Satan, in an attempt to turn Earth into a second Hell.

Keanu Reeves is an exceptional Constantine. Although Reeves is not physically similar to the character found in the comic book on which the movie is based, he plays Constantine well. Initially, he is frosty and rude and he definitely does not play well with others. Caring little for anyone other than himself at the beginning of the film, he banishes demons from Earth with a singular goal in mind; to redeem himself in the eyes of God and secure entry to Heaven. Making this goal difficult is the moderately successful suicide attempt on his record. As the movie progresses, we see Constantine begin to breakdown. He loses hope of getting into Heaven when Gabriel tells him he can’t buy his way in, and his demeanor falls even further after a visit to a doctor confirms that his lung cancer is progressing aggressively. However, as he realizes how key he will be in the fight to destroy the plans of Gabriel and Mammon, he begins to fight again, truly redeeming himself in the process. Although many film goers feel that Reeves is a single role type of actor, mostly roles that don’t require a large range of emotions or animations, this is definitely a role he fits into perfectly. 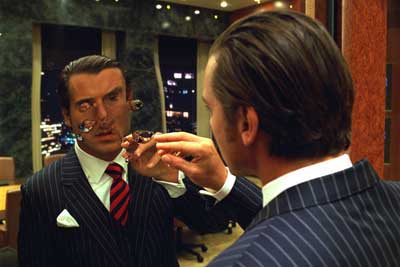 The film is chock full of good plotlines. Gabriel hatches the plan to turn Earth into a second Hell in order to make humans worthy of God’s love and acceptance. The plan is to turn the plane of Earth over to Lucifer’s son, Mammon, so that he may rule over this Hell on Earth and any humans who survive purgatory will be have proven themselves worthy of a place in Heaven. Constantine sends demons back to Hell in his attempt to prevent himself ending up there at the point of his early death. His time is quickly running out due to lung cancer caused by smoking since the age of fifteen. Angela Dodson encounters Constantine when she seeks his help in investigating possible supernatural causes of her twin sister’s death, at which point their fates become intertwined. 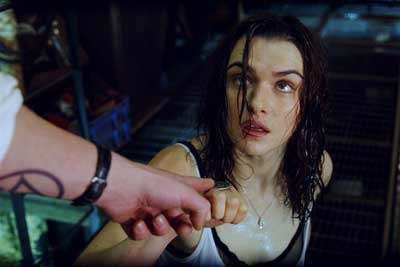 The special effects in the film are quite good as well. From the smoldering, scalding hot cityscapes we see in Hell to the winged demons the characters run into on Earth, everything is spectacularly done. Demons ooze mystery liquids from their faces (or what’s left of their faces in some instances), are rendered to ash when doused with holy water, screech so shrilly one is reminded of a fierce wind gusting through a window screen, and have small bits of the fires of Hell glowing in their eyes. Angels are otherworldly in the beauty of their faces and wings. The imagery is exquisite, albeit a bit traditional in some senses.

The film also has a good bit of artistic merit. From the several instances of glass shattered into a million pieces to the simple, drab colors that lend to the gritty, stark, terrifying reality of the film, it’s impressive. The irony of Lucifer wearing a wholly white suit while his feet drip black tar or of Gabriel, also dressed in full white, pinning Constantine to the ground as he addresses Gabriel with the line, “And the wicked shall inherit the Earth.” The unexpected subtleties of the film are largely sarcastic (think the shot of the man carrying the Spear of Destiny with a billboard in the background reading “Got Faith?”) or iconic (for example, the same man walking through a field of cows who all drop dead at his approach) and serve to impress or shock the viewer.

All in all, I’d recommend the film. If you found yourself enjoying twisted plotlines mixed into religious concepts (think The DaVince Code, but with horror), Constantine is a movie you should see.