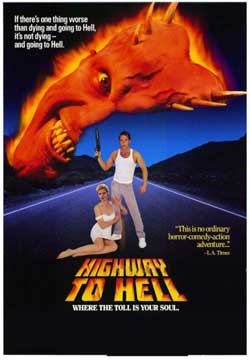 An eloping bride is taken into Hell, and her fiancée must pursue.

Highway to Hell may very well be one of the greatest campy horror films to never arrive on DVD. At least not in the traditional sense. There are copies floating around that are some sort of transposed DVD version…but hey, what gives why no release?

If you don’t know what I’m talking about then you might recognize this obscure gem in the same sense that “The unholy” never came to DVD either. Starring Chad Lowe and Christy Swanson this film has alot of great elements that work in a very fun way. The cast features some rather unique appearances such as some early Ben and Jerry Stiller, Gilbert Gottfried and one of Lita Ford’s only real cameo screen roles (at least all that I remember). But stars aside, it’s the story and visual journey that really makes this a fun ride top to bottom.

When Charlie Sykes and Rachel Clark heed a warning by a quick stop gas attendant to not stop between the 2 Joshua trees, guess what happens? Yep they stop and some carved up policeman from hell kidnaps Rachel for a ride into hell. Now Charlie, a bit confused is forced to find this “road within a road” that …yep…you geuss it..leads him into hell.

As Charlie speeds forward to save his fiance Rachel Clark, he has to encounter a few hellish weirdness along the way. Diners that serve to the living dead, nightclubs with caged bare breasted women and even some of history’s famous persons thrown in for comedic flair.

The mostly desert setting actually provides a believable appeal filled with motor cycle gangs, angry traffic mobs and a call box that insults the caller. Charlie is hot on trail of Hell Cop who has kidnapped Rachel to …well….. deliver to the devil. The devil as you guessed wears a few disguises and seems to surround himself with art and strange abstract art living statues. With Rachel still being a virgin, this ups the anty for Satan to claim her as his own. Charlie has better plans which features an ol-race-the-hell-cop-to-the-finish line challenge.

He even runs into a pretty creepy demon that would rather make love than terrorize.

Though this film may be one of the original batch of “heed warning from gas attendant movies” that inspired so many more, the journey here is a trip thru hell that echoes hints and spurts of Dante’s inferno with a dark comedic weirdness that is like no other.

While, the film reeks of cult-like makings, it provides a fun ride while doing so. Namely the use of makeup fx which give the demons and creatures a cool….Tales from the Darkside kind of appeal. it is certainly campy, odd, and strangely cool at the same time.

Even with my certain level of praise, this is no masterpiece. It really is more representative of the film style and genre mix of that time. Do yourself a favor if this ever releases properly and give it whirl. I’ve seen it myself about 6 times and still enjoy it with every watch.

On Hellcop’s chin are the letters “S.J. + L.Q.”, which stand for Steve Johnson (makeup artist), and Linnea Quigley (his wife).

In the scene where Beezle tows the car, it says on the side of the towtruck “Satanic Mechanic”. A reference to the song in The Rocky Horror Picture Show.

This movie features four members of the Stiller Family: Jerry Stiller, his wife Anne Meara, Ben Stiller, and Ben’s sister, Amy Stiller, who does bit parts in most of Ben’s movies. 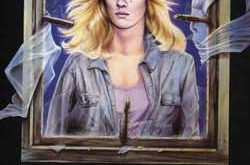 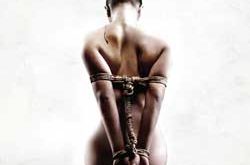