SYNOPSIS:
“A bunch of Satanists in the American rural landscape have terrible powers which enable them to melt their victims. However one of the children of an earlier victim vows to destroy them.” (courtesy IMDB)

REVIEW:
Mark Preston (William Shatner) and his parents live in the desert and one rainy night some unexpected company stops by. Jonathan Corbis (Ernest Borgnine), the Devil’s messenger, takes Mark’s mother (his father was killed) which results in Mark chasing and catching up with Corbis in a ghost town. The Preston family has a long relationship with Corbis that involved a family member taking The Book Of The Undead three centuries ago, and unless Corbis has that book he cannot have complete control over their souls who had signed it in blood. Another good reason for Corbis to want revenge against the Preston family is it was Mark’s ancestors who burned him at the stake in 1680. 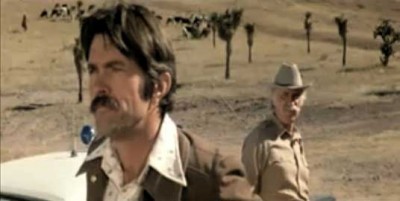 Mark quickly tires of Corbis’ Satanic ramblings and provokes him to duel (Mark believes his faith in God will lead him to victory) so he can save the souls of his family. Mark loses and it does not take long for his brother Tom (Tom Skerritt) to come into town and begin searching for his family. Tom figures out what is going on and sneaks his way into a ceremony where Corbis is trying to conjure up Satan and if he can get his hands on The Devil’s Rain (a container that has the souls of the undead) he can destroy Corbis and free his family. 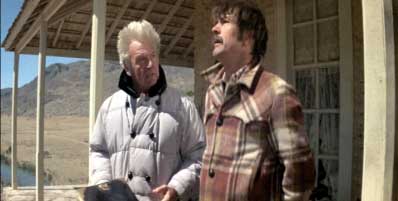 What a wild and drawn out movie this turned out to be! The Devil’s Rain (1975) reminds me of those cheap campy movies that were popular at drive-ins (remember those?) back in the seventies where people would cram thirty in a car and look for a safe place to get some snacks and be with friends. It was also a great excuse to get out of the house on weekend nights. The hot spots were always drive-in theatres that usually showed three horror movies. The Devil’s Rain fits the bill for the drive-in crowd, but since they are long gone (shedding a tear right now) we’re stuck with the DVD instead.

The movie does provide some good scenes where there is lots of goo and demonic looking creatures but as far as scares go there is none to be found. Sure, it’s a treat to see Ernest Borgnine camping it up in his red robe and listening to him monologuing with a menacing voice but in the end it is obvious everyone involved was needing a pay cheque and The Devil’s Rain at least bought them some groceries. Even with a running time of 86 minutes the movie feels like two hours before the climax which, by the way, is pretty cool, but even then the wait for the ending is not worth sitting through. 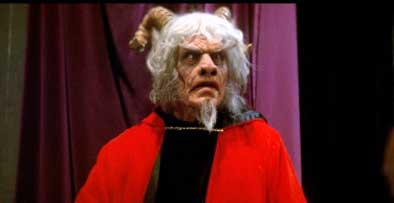 For those with failing eyesight who may have missed John Travolta‘s brief bit in The Devil’s Rain, the distributors redid the title credits of the movie after he became famous, moving Travolta’s name to the top of the cast list. This would effectively prevent magazine profiles from touting Carrie (1976) as the good-natured actor’s film debut, and further underscores how, when it comes to celluloid, you can run but you can’t hide. Travolta appears as a zombie during the climax, has one line of dialogue and then puddles-up like the rest of the zombies. If you weren’t specifically looking for him, you wouldn’t find him. 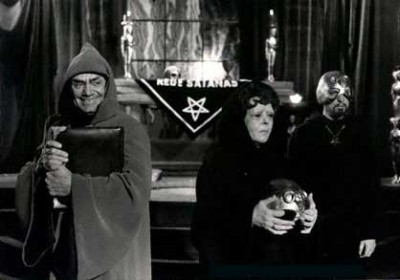 In recent years Travolta has become one of Hollywood’s favourite ‘bad guys’, but before Pulp Fiction (1994), his fame rested primarily on his disco moves in Saturday Night Fever (1977), where he pulled himself up by his bootstraps by wearing a white suit, latching on to a classy dame, and gyrating to the Bee Gees like no-one has done before or since. Sylvester Stallone directed the failed sequel Staying Alive (1983), proving you can take the disco-dancer out of Brooklyn, but you still can’t hustle the box-office. Travolta had a surprise hit on his hands when he played another blue-collar type, this time a taxi driver who makes the perfect babysitter in Look Who’s Talking (1989) and its sequel. Despite those anomalies, his career was in the kind of limbo you’d expect from a Devil’s Rain zombie until Quentin Tarantino and Pulp Fiction came along.

The Devil’s Rain is like a bad song you can’t get out of your head. It isn’t a successful film, or even a particularly good one, but it’s made with sincerity, verve, and an understanding of the horror genre’s potential for kinetic film-making and potent allegory. Moreover, it isn’t a cheat – this isn’t just another cheap cash-in on the Satan craze of the seventies. The last thing director Robert Fuest and screenwriters James Ashton, Gabe Essoe, and Gerald Hopman are looking to do is take your money and run. And though this is largely a trend of the eighties onward, they aren’t looking to vindicate their reputations by condescending to the material, either. I actually feel a little protective of The Devil’s Rain – its failure is one of incompetence than of cynicism, and that’s really rather invigorating in an age where self-consciousness reigns supreme in horror films both good and bad. 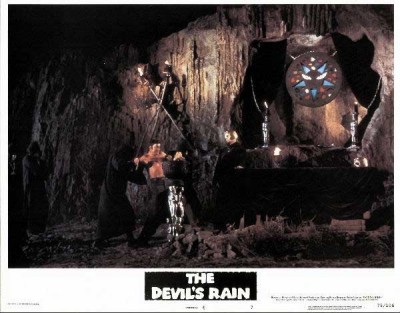 I know it’s pointless to offer constructive criticism to a film made over three decades ago, but like I said, I feel a bit protective of The Devil’s Rain. The screenplay isn’t terribly good – there are a number of good things in it, of course, but it fails to coalesce as a whole – Fuest seems to have shot the first draft. Julie’s ESP is used as an expository shortcut (she has flashbacks to the 1600s when the Preston clan betrayed Corbis and were cursed) and proves of little use in terms of fleshing out the character or the storyline. 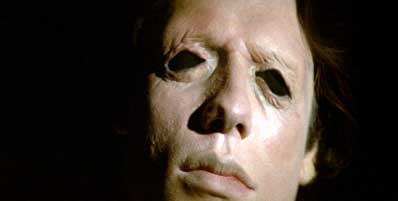 By defeating Shatner’s character early on, it appears they were hoping to subvert audience expectations and possibly cultivate a pervasive atmosphere of despair. We have reason to suspect, after all, that because he is a brand name, Shatner will play the hero. Alas, he is nevertheless too valuable a property to retire so hastily, thus instead of being killed off, Mark is tortured throughout the rest of the film. Shatner is also enlisted to play Mark’s Puritan ancestor, a goofball move that forces him to earn his salary but significantly compromises any potential The Devil’s Rain has for legitimacy as a horror flick. By understating the shock of taking Mark out of the equation, we never quite attach ourselves to Tom, leaving the film without a protagonist. 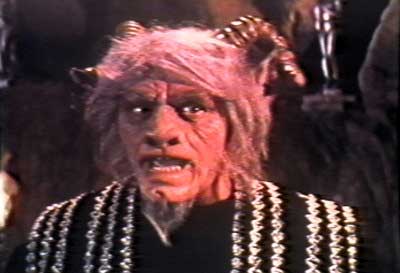 The Devil’s Rain is hampered by its PG rating when it comes to exploring the sexual aspects of the material. Corbis ‘tempts’ Mark by having a beautiful woman bow down to kiss him. Then he reveals that this was an illusion and the woman is actually Mark’s own zombified mother! This is the first and last suggestion of incest or even sexual temptation. While a flashback to Corbis drawing a pentagram in blood on the soft belly of young boy could have developed a real paedophilic charge, it’s over before it has accrued the necessary weight. When Corbis kidnaps Julie and prepares to sacrifice her, the film somehow doesn’t muster the anticipated BDSM kink. It’s not that I require movies to be subversive along those lines, I just wonder why they brought it up in the first place if they weren’t going to go balls-out in the follow-through.

If The Devil’s Rain is half-assed on the conceptual level, though, it is redeemed in the execution. There are a number of surface pleasures. Shatner and Borgnine act the sh*t out of this movie to an extent unseen since Bette Davis and Joan Crawford went at it in What Ever Happened To Baby Jane? (1962), though Borgnine is by far the superior thespian and can better focus his blunt theatrical style – I defy you to not giggle at the sight of porcine Shatner writhing in agony as his character is burned alive. The makeup effects are simultaneously elaborate and cheap-looking – when Corbis transforms into a goat monster, it’s a little like seeing the apes in Planet Of The Apes (1968) – he’s neither goat nor Borgnine, but a creature that exists only in the context of The Devil’s Rain. The film is ‘bad’ in that it is sloppily made and doesn’t exactly work in the way it’s supposed to, yet because it’s utterly sincere about its badness, the sloppiness and unintentional hilarity approximate a sort of nightmare quality. 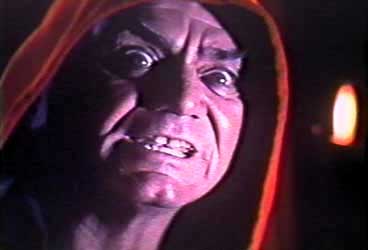 Ultimately, what has pushed me into giving The Devil’s Rain a recommendation is that it has evidently put some serious thought into exploring the nature of evil. Although Anton LaVey was a consultant on the film (to ensure the accuracy of the Satanic rituals) and has a cameo, The Devil’s Rain moves beyond the gussied-up objectivism of the official Church of Satan. The key scene finds Mark trying to extract a drink from a water pump that yields nothing but dust. Corbis spots him, walks over, and with one push gets the water flowing. Mark then takes a drink but immediately spits it out. “It’s bitter,” he tells Corbis, who agrees, adding: “But it sure is a sweet way to end a thirst.” And it’s with that thought in mind that I’ll make my farewells, and please be sure to join me next week when I have the opportunity to tickle your fear-fancier with another feather plucked from that cinematic ugly duckling known as…Horror News! Toodles!