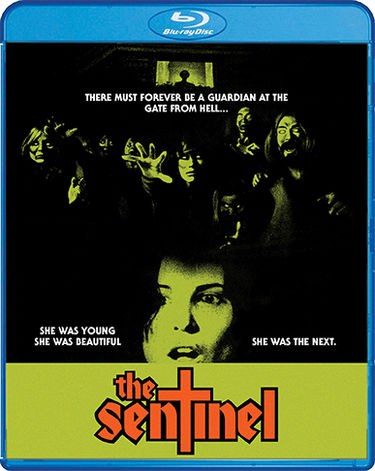 “A fashion model moves into a house inhabited (on the top floor) by a blind priest. She begins having strange physical problems, has trouble sleeping at night, and has some nasty flashbacks of her attempted suicide. She complains to the real estate agent of the noise caused by her strange neighbors, but finds out that the house is only occupied by the priest and herself, and ultimately discovers that she has been put in the house for a reason.” (courtesy IMDB)

One of the oldest possession themes of all is the house or building possessed of evil, from The Turn Of The Screw by Henry James (1898) to The Haunting Of Hill House by Shirley Jackson (1959) to The Shining by Stephen King (1977). In fact the ‘Evil House’ has become so universal it was the subject of The Simpsons first segment of their very first Treehouse Of Horror episode, entitled Bad Dream House. The old New York brownstone seen in The Sentinel (1977) is one of these bad places: Ground floor – masturbating lesbian ballerinas; First floor – Burgess Meredith with a canary and a sinister twinkle in his eye; Second floor – the heroine’s dead father having sex with overweight prostitutes; Top floor – an old blind priest; and one very baffled but glamorous fashion model named Alison (Cristine Raines) who has just moved in and soon starts suffering migraines. 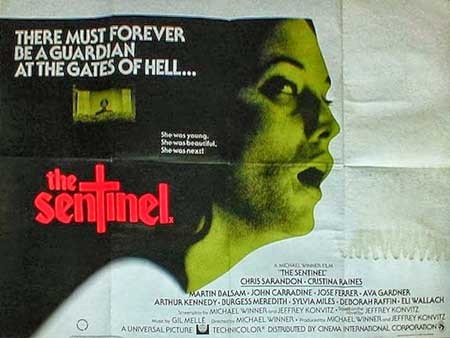 She becomes even more baffled when the real estate agent tells her that nobody else lives in the house, because she had just had dinner with a group of inhabitants who, we later learn, are all deceased murderers. It comes as no surprise to discover that the house is actually a gateway to Hell – an idea done better in Lucio Fulci’s The Beyond (1981) – but script-wise it seems to be gilding the lily to have her learn that her boyfriend is also a murderer. 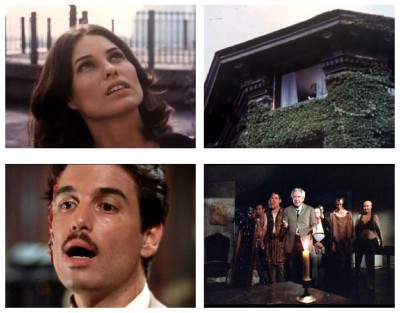 All ends well: Alison banishes the hordes of Hell and becomes a nun, the house’s new sentinel. In a particularly despicable piece of casting, the hordes are played by horribly deformed people and circus freaks. As to the morality of using real freaks in movies, students of such ethical questions could do worse than to study Tod Browning’s Freaks (1932) in relation to The Sentinel and Brian DePalma’s Sisters (1972). The Sentinel, in which the freaks are used to symbolise a world of monstrous evil, is pure sadistic exploitation of the worst kind. Sisters, however, is arguably acceptable. Again, the freaks stand for the ‘abnormal’ but this time in a context where the film’s ‘normal’ heroine is being brought face-to-face with her own abnormality.

The one thing The Sentinel has going for it is the amazing supporting cast featuring many famous faces from Hollywood’s past and future. Are you ready? Here we go: 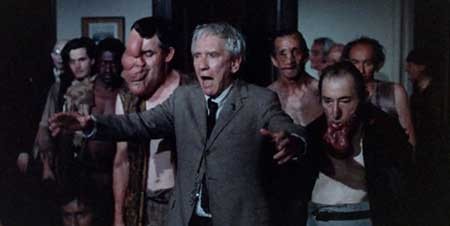 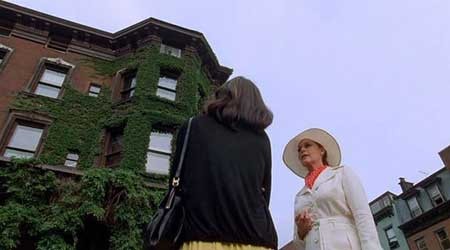 * Beverly D’Angelo made her film debut in The Sentinel, which almost ended her career before it started. Fortunately, a minor role in Annie Hall (1977) garnered her a number of hits, including Every Which Way But Loose (1978), Hair! (1979) and Coal Miner’s Daughter (1980). Her biggest break was National Lampoon’s Vacation (1983) as wife Ellen Griswold and returned for at least three sequels and a short film. More recently she starred in the independent cult film Gamers The Movie (2006) and could be seen in the television series Entourage and Law & Order: SVU. 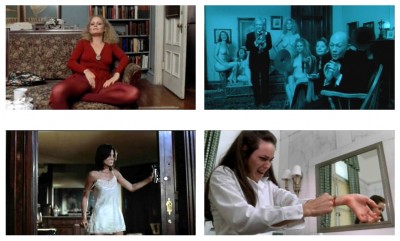 * Chris Sarandon was married to actress Susan Sarandon from 1968 to 1979. Nominated for a Best Supporting Oscar for his role as Leon in Dog Day Afternoon (1975), he is best known for playing the vampire in Fright Night (1985), Prince Humperdink in The Princess Bride (1987), the detective in Child’s Play (1988), as well as providing the speaking voice for Jack Skellington in The Nightmare Before Christmas (1993). 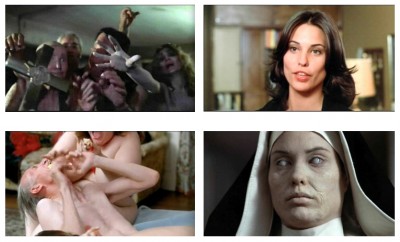 * Eli Wallach gained fame in the late fifties for his performance in Baby Doll (1956), for which he won a BAFTA award for Best Newcomer. His most famous film appearances include The Magnificent Seven (1960), The Good The Bad And The Ugly (1966), The Godfather Part III (1990) and The Holiday (2006), and has remained active well into his nineties, with roles in recent films such as The Ghost Writer (2010) and Wall Street II Money Never Sleeps (2010). 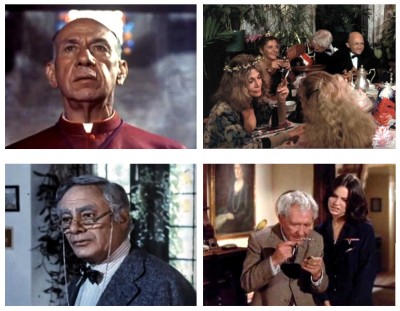 * Jerry Orbach was well known for his starring role as Detective Briscoe in Law & Order and as the voice of Lumière in the Disney animated musical Beauty And The Beast (1991), but was better known for his stage work. Prominent roles included El Gallo in The Fantasticks (the longest-running stage musical play in history), Chuck Baxter in the original production of Promises Promises (for which he won a Tony award), Julian Marsh in Forty-Second Street, and Billy Flynn in the original production of Chicago.

* John Carradine appeared in over three hundred films with titles as diverse as The Invisible Man (1933), The Bride Of Frankenstein (1935), House Of Frankenstein (1944) Sex Kittens Go To College (1960) and Billy The Kid Versus Dracula (1966). Offspring include talented sons David, Keith and Robert, as well as grand-daughter Martha Plimpton.

* José Ferrer was married to singer Rosemary Clooney (George Clooney’s aunt), and the couple had five children, including actor Miguel Ferrer and Gabriel Ferrer, who married singer Debby Boone, daughter of Pat Boone. Films include Miss Sadie Thompson (1953), The Caine Mutiny (1954), Deep In My Heart (1954), Lawrence Of Arabia (1962), The Greatest Story Ever Told (1965), Ship Of Fools (1965), A Midsummer Night’s Sex Comedy (1982), To Be Or Not To Be (1983), and Dune (1984). He often bemoaned the lack of good character parts for aging stars, but readily admitted that he took on films such as in The Sentinel mostly for the money. 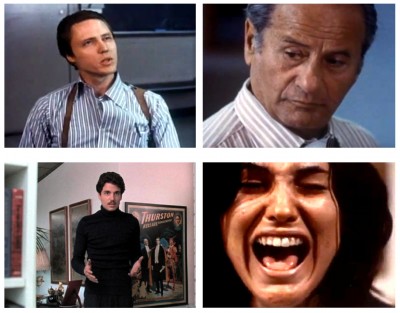 * Nana Visitor is best known for her television work playing Kira Nerys in Star Trek Deep Space Nine, and Jean Ritter in Wildfire. Other television appearances include Dark Angel, Battlestar Galactica, Family Guy, Star Trek Enterprise and Torchwood. Her most prominent film roles include Pamela Voorhees in Friday The 13th (2009) and the real estate agent in The Resident (2011). 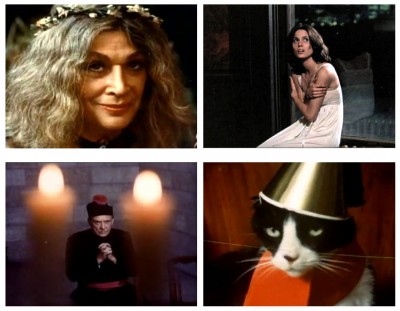 Whew! I just love lists! Anyway, The Sentinel is an abject lesson in how not to make an exploitation film. Scene after scene is cynically set up purely to manipulate the sado-voyeurism of the audience but, because the story is wildly incoherent, nobody cared and the movie (which had a then-huge budget of US$3.7 million) flopped at the box-office. There is more to fantastic horror than a series of arbitrary chills, and the film indeed displays leaden literal-mindedness, not untypical of director Michael Winner‘s work before or since.

Until then, good night and remember, as my old friend Bela Lugosi would say, “Bevare! Bevare of the big, green dragon that sits on your doorstep – and the gifts it leaves on your lawn.” Toodles!

The Sentinel (1977) is now available on bluray per Shout Factory