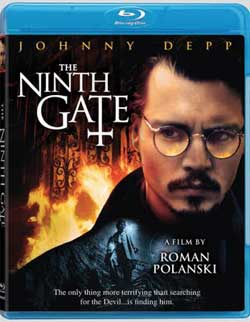 A rare book dealer, while seeking out the last two copies of a demon text, gets drawn into a conspiracy with supernatural overtones.

While it might seem that the draw to this curious film is the A-lister Johnny Depp, it’s root of interest lies within the director himself Roman Polanski who many on us flocked to see based on our cinematic relationship on previous creations. And yet, with “The Ninth Gate” toted as a horror mystery thriller, we should expect some level of unexpected turns under Polanski’s vision.

With that statement it should be noted that Johnny Depp brings a perfect performance to the movie adding just the right amount of character and style to make it all work (despite critical response). “The Ninth Gate” was a delight to experience, that carries itself with total engagement leading up to a extremely poor ending. The ending which might seem abstract to begin with is the reason the film failed to receive the kind of respect it “should have” received. Roman Polanski chose the path less-taken within the movie culture. That path lead to ambiguity that left audiences dry. While we followed his lead from the talk of magical devil books to the very core of crossing over, we were let down never quite getting to enjoy the meal that he so carefully prepared. 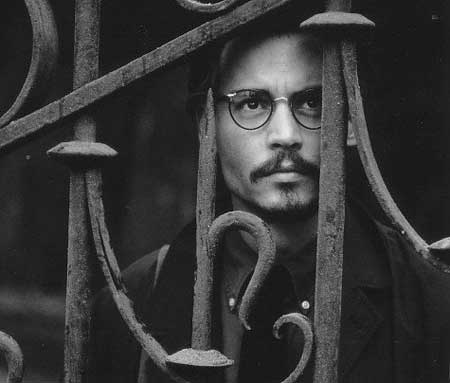 So let’s begin on that note…. to celebrate a rather interesting tale. One that teases us with great things and pulls them from us in closing. Dean Corso (Johnny Depp) you might call an unscrupulous business man…his trade….rare book buying. While garnering a reputation for his skill in book research, he has managed to attract the interest of Boris Balkan (Frank Langella) of whom wishes to hire him to check the authenticity of one of his prized books. The book is called “The Nine Gates of the Kingdom of Shadows” (also referred to at first as “Delomelanicon”) written in the 17th century by Aristide Torchia. It is said to have been assisted by the devil himself making it a much heralded book of power for those who can discover its secrets. 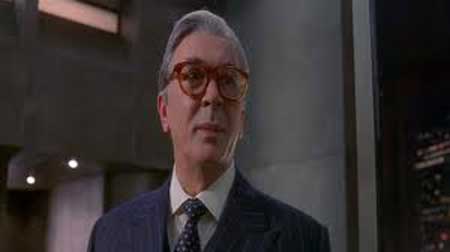 Dean is hired to travel the world and check on the only other 2 copies for comparison sake. Balkan wants to assure that he possesses the authentic version and not a mere copy. Though each book appears to be authentic, carefully constructed which begins a major mystery journey for Corso who makes his own discoveries. Along the way he notices being followed by a mystery woman (Emmanuelle Seigner) who reveals as being some one of questionable abilities. The clues lead to the noticing of an engraving “LCF” that only appears on certain illustrations. This leads to the discovery that the 3 books might all be authentic with its pieces making up the whole (puzzle). 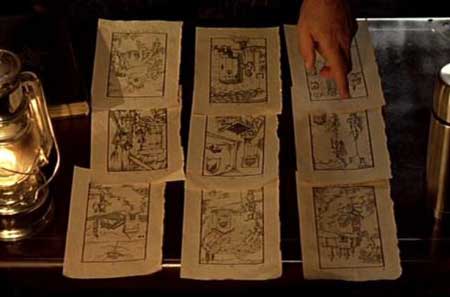 It is later revealed that those who tap into its power will open the doors to the 9th gate and summon Satan. 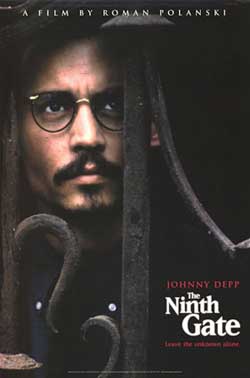 “The Ninth Gate” is indeed a journey of discovery centered around the interest in the devil himself. Corso encounters several players and an obsessed woman named Liana Telfer (Lena Olin) who desires to possess the book herself (she once owed it until her husband sold it off). We get a unique mix of cult play, enigmatic characters and a look into the world of passionate book owners. While the details of the collections might allude our interest, the desire to own and possess is rather unique. 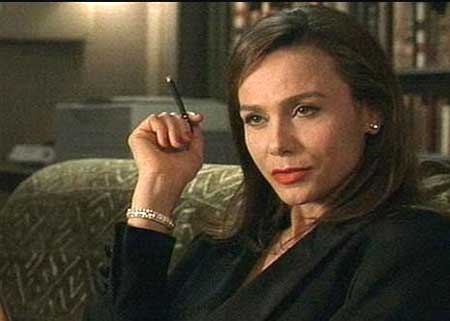 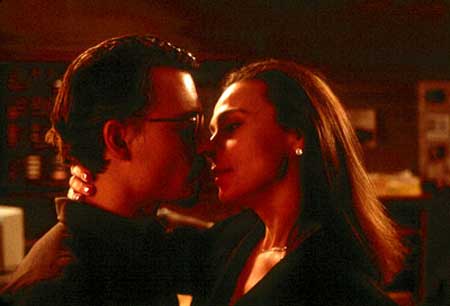 Frank Langella as Boris Balkan plays a worthy role as the strangely obsessed collector, while Lena Olin brings her “hot vixen with claws” character front and center. Depp while keeping a rather monotone stance approaches the role with a seediness and darkness that is subtle but still apparent. Balkan proves to be quite the wealthy obsessed collector himself, who will pay any price for the secrets of this book. His private collection contains the biggest library of devil books in existence. 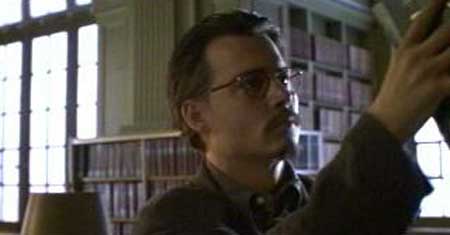 The movie upon debut was received with mixed reactions which cited a slow pace mixed with a rather laid back approach. Ultimately many felt let down with the uneventful ending hoping for something much more resolved and visual.

“The Ninth Gate” while a work of fiction actually compels one to dig even further than the movie alludes to. Each of the illustrations used contains imagery suggestive of tomes, and ancient lore that might invoke more personal investigation. While these images are never really discussed into he movie, the director leaves much of the pieces for its viewers to decipher such as the mystery lady who could be a form of Satan or a whore of Babylon. In any case its never quite clear but certainly worthy of investigation. 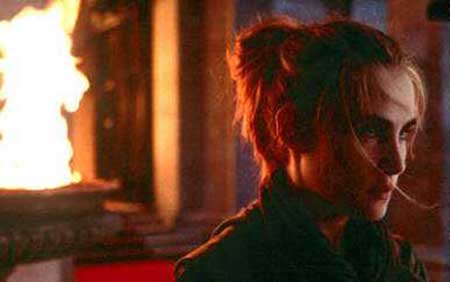 Despite critical reaction, I found the story to be highly engaging as a interesting occult film full of several changing parts set deep within Satanic Noire.