Ok, you found your way here looking for some clarity on the whole demon possession thing. Well I’m hear to tell ya…… I don’t type haphazardly (and rather consider the details) . The subject has been analyzed and evaluated to qualify and disqualify common misconceptions.

First let’s be clear…demon possession is exactly that. That doesn’t mean possession if you “ARE” the antichrist (aka The Omen) that you are possessed, as therefore you’d be doing the possessing. Satan himself counts as a demon in the context of the term “Legion” (aka I have many names, thus suggesting that Satan is also among many demons in some cases – hence Emily Rose).

I felt the film “Stigmata” was not a great choice as while Arquette clearly becomes possessed, it is taken in a different context..,one more of a benevolent spirit or the aura of Christianity (and the church) revealing its true nature….let’s call it a gray area for sake of argument (a maybe for that matter). “The Shining” has been referred to but I always believed Jack Nicholson to be somewhere between going mad, and influenced by angry ghosts…….never really a demon possession as some allude to. The film “Legion” contained obsession by angels (which could be argued as future demons)..however the film itself kept closer married to the angel “idea” (another gray concern) I also considered “The Ring“, but figured that Samara was more a vengeful ghost than a demon. (Note this also goes for the equally girl from beyond film “The Grudge” (again vengeful spirit))

In summary, the key to this list is “best demon possession“. In other words, a demon possesses another resulting in a frightful or believable experience. The list could be extended into a Top 20, however I believe some exceptions to the rule would have to be made. It some respect this list bears resemblance to our other which is “Top 20 Satanic Movies” (but not entirely). Intuition tells me with the success and/or frustration of “The Devil Inside“, that we haven’t seen the last of worthy demon possession films.

1- The Exorcist (1973)
You had to expect the leading possession of all possessions. Linda Blair, will forever haunt our dreams as the possessed Regan MacNeil. Green Pea soup, head turning, crotch stabbing, foul-mouthed-little-devil of a girl still reigns to this day as the most effective possession on screen (and of all time for that matter). Many tried to duplicate this film’s tenacity, but have never quite matched its visceral demonic intensity (quite the same). If you are new to the game, (meaning a young teen)…then you’ll want to ride this train just once to say you did. 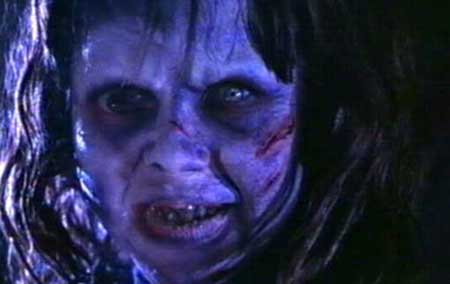 2- The Last Exorcism (2010)
As a possession movie it seemed to appeal more to the younger crowd than to us older “Exorcist” experienced folk. I won’t say I “thought” this was a great movie, as it wasn’t. It did however contribute it’s fair share of scenes that involved decent and sometimes harrowing possession moments. Possession has evolved into these cinema verite style films to add to the realism. I’m not sure it was “real enough” but none-the-less it was good enough to be on this list. It suffered some controversy over its edgy posters which probably helped it do as well as it did. Word is out that a sequel is currently under planning. 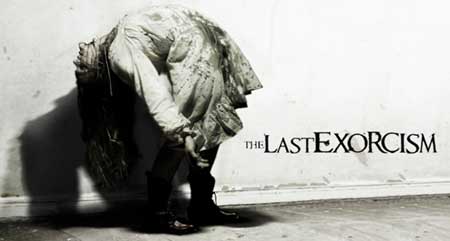 3- The Exorcism of Emily Rose (2005)
A film that many critics were at arms over. In short it did very well in the circuit and in the box office ($144,216,468 worldwide). But with that aside, “The Exorcism of Emily Rose” offered some pretty edgy possession scenes. Actress Jennifer Carpenter pulled off some pretty creepy body contortions on her own which combined with her facial expressions seemed to send a shiver or 2 down viewers backs. Personally, it’s one of my all time favorites in this category. I think Jennifer Carpenter nailed it without having to use the low budget look of found footage films. 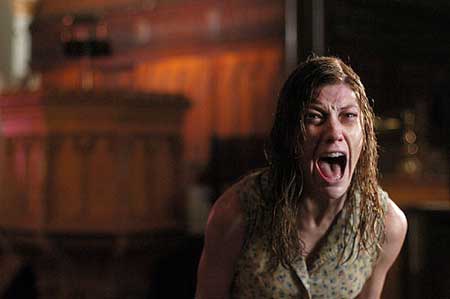 4- Prince of Darkness (1987)
A film that had some confusion over its physics-meets-hell approach. With impression aside, “Prince of Darkness” has an absolutely great (and creepy) possession scene. Character Kelly gets a mouth full of Satan and becomes a complete living capsule for the prince of darkness himself. As her body becomes scarred and nasty, she is also assigned with an even greater task….assisting the “Anti-God” (Satan’s master) over the portals of Hell into our world. A favorite possession moment in film history, despite impressions and criticism of the movie itself. This is one film that you’ll want to own on DVD

5- Constantine (2005)
“Constantine” had a very cool opening moment where Constantine takes down a possession in progress. The film felt a bit more light-hearted than others, however it did a pretty decent job at keeping the scary demons….well..scary. The opener to this film is nice example that pays a small tribute to its godfather film (The Exorcist) 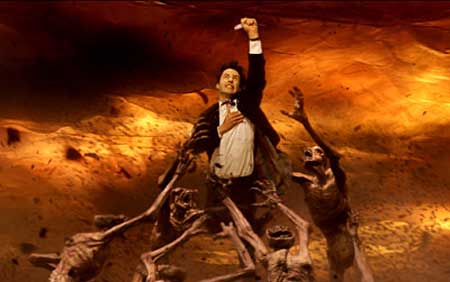 6- The Rite (2011)
While not as extreme as some of the other entries on this list, “The Rite” follows the more traditional film approach of a skeptic, a Father, and a demon (in this case Baal.  Anthony Hopkins stars as Father Lucas, while Colin O’Donoghue plays the role of the more skeptical Michael Kovak. Not a film I have the urge to see more than once, “The Rite” is still an appropriate by the book sort of entry on demon possession. 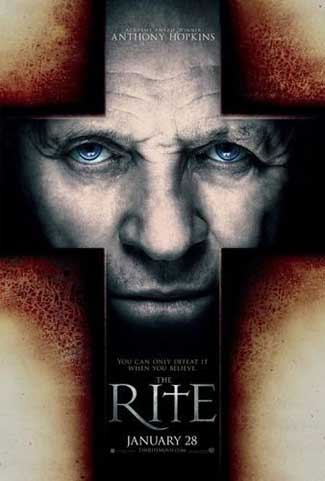 7- Paranormal Activity (2009)
A much more subtle approach than some of its cohorts here. “Paranormal Activity” is a powerful introduction to possession thru stillness, odd behavior, and the occasional scary minimalist moment. In fact all 3 films from this franchise should be mentioned. But for the sake of the list, this first film introduction was the one worth noting. Found footage possessions can be really quite creepy, if played right! 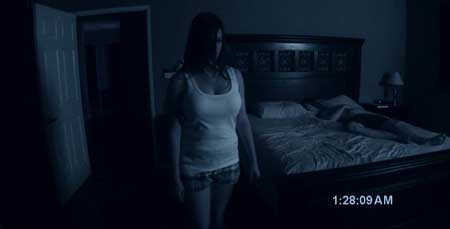 8- Night of the Demons (1988)
It’s 80’s schlock, I’ll give it that. Angela was a face and presence that made a pretty good impression in this first entry. She was definitely possessed, nasty looking and campy all rolled in one. Here is the synopsis in case you forgot…

Ten teens decide to have a party at an abandoned funeral parlor called Hull House. Hull House is on a strip of land rumored to be unclean and unfit for human inhabitance. The house has a nasty history to it including a the Hull family being murdered. After the ten kids enter the house they decide to have a séance. After an attempt for the séance they awaken a demon that lives in the basement. It possesses one of the girls then from her everyone else becomes possessed and killed by demons that inhabit the land. 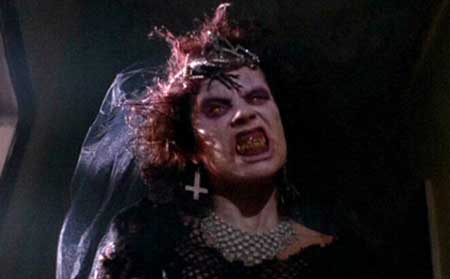 9- The Devil Inside (2012)
I stated this when I first saw it, I’ll state it again. “The Devil Inside” while as a film has serious issues….it also contains the best possession scenes I’ve seen in a long time. You may hate the film for leaving out an ending, however you have to at least acknowledge its attributes. Possession being one of them. Its’ worth it for that alone. 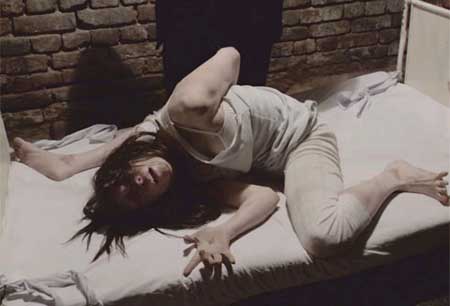 10- Beyond the Door (1974)
An older entry, that arrived on the tail of the “Exorcist” wave. For being an Italian copycat “sort-of” entry it still had some powerful moments. Ones that many of us actually recall quite well. Juliet Mills plays the possessed Jessica Barrett. Worth a peek.

Juliet Mills plays a young pregnant woman in San Francisco who is going to have the devil’s baby during her strange possession. Richard Johnson shows up to help her… but what does he really want? 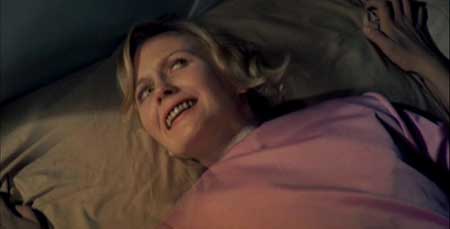 11- [REC 2] (2009)
Usually I would include the original for this entry, however was were still assuming zombies in [REC], which was revealed to be the “possessed” in this sequel. It changed the tone a bit and brought “that” new element into its premise. It’s more of that camcorder stuff, but its very well done and a powerful film to boot. 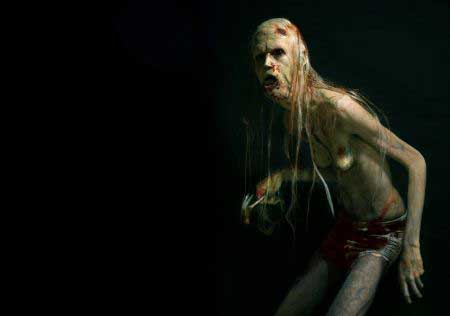 12 Ghost Rider (2007)
One less thought of probably due to the main character being more of a Marvel anti-hero of sorts. Ghost Rider takes on a different aspect of demon possession. He is one “with” the demon from a Lucifer inflicted curse. The demon takes over when Johnny Blaze experiences high emotions. It’s actually the only one from this list where I believe the inflicted actually enjoys their possession for its special trademarked abilities. 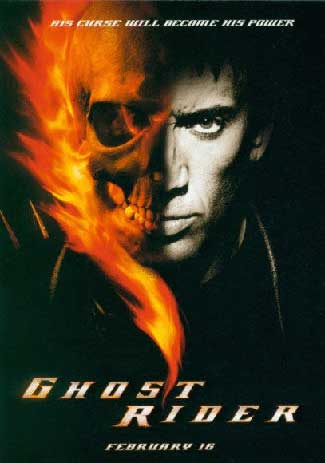 13- Evilspeak (1981)
Remember that movie where actor Clint Howard becomes the possessed Stanley Coopersmith? Ya, it wasn’t a huge hit especially with it being sort of lat night HBO kind of film, but Clint Howard was quite creepy with his computer aided demon possession (Since this was the early 80’s, the computer aspect was rather cheesy).

A military cadet who happens to be a social outcast taps into a way to summon demons and cast spells on his tormentors through his computer. 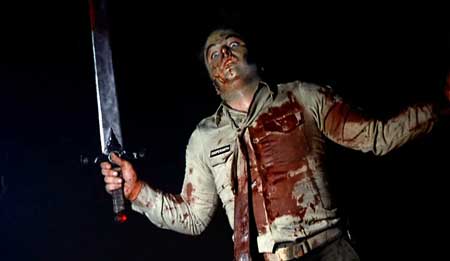 14- The Evil Dead (1981)
The Evil Dead has the distinction of being one of the earlier scary meets comedic releases. not to mention the induction of the “Ash Williams” character. However, as many will remember , “The Evil Dead” had some pretty worthy possession scenes as the demons of the Necronomicon made their way thru body after body. For this inclusion I’m going to point specifically to the possession of actor Ellen Sandweiss who played the role of Cheryl. When she comes creeping from that basement…..we’ll let’s just say it is pretty effective. 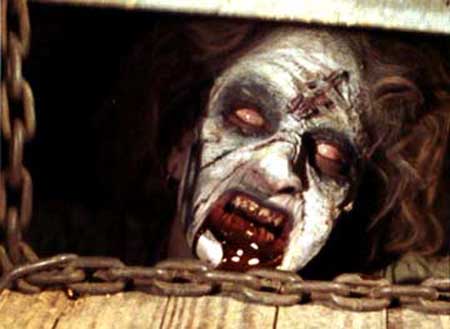 15- Mirrors (2008)
One possessed Anna is possessed then freed then re-possessed, as a nasty demon who was trapped within the mirrors collects souls along the way (hoping to be freed itself). The final confrontation takes place in the “Psychomanteum”. This film is one that I “almost forgot” about for this category but now thinking back is one of the ones that “should” be on more lists. I really did enjoy  “Mirrors” AND felt that the ending has a great demon possession scene.