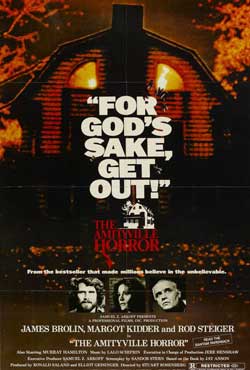 This 1979 chiller is based on the reportedly true story of George Lutz (James Brolin) and his wife, Kathleen (Margot Kidder), who move into their Long Island dream house with their children. But the Lutz’s lives turn into a hellish nightmare as the legacy of a murder committed on the premises gradually affects the family. Even the priest they call in, Father Delaney (Rod Steiger), cannot exorcise the demonic presence from the home.

Screenplay by: Sandor Stern
Directed by: Stuart Rosenberg
Starring: James Brolin, Rod Steiger and Margot Kidder
Based on the novel by: Jay Anson

Hell-o, homebodies of Horror. It is with great pleasure that I give you all the review of the second film that got me into the Horror Genre when I was three years old. The second “doorway” into my realm of lifelong Horror addiction (the first was The Town That Dreaded Sundown, review coming soon)… The Amityville Horror. A timeless classic that lives within the hearts (and if you’re Horror fans, your homes) of many. A re-make was just released a few years ago (of course) that fails in comparison to this paramount of a Horror monument. A little background on the story…

The actual home that the film is based off of is known as the “most haunted house in America” and “the most frightening house in America.” Another home was originally on the property, built in seventeen eighty two. It was moved off of the land and the infamous house that is in its place now was built in nineteen twenty eight. Many speculate as to if the Lutzes were telling the truth, or making the whole thing up as a publicity hoax. They claim that the house taunted them and a priest that they invited into the home to cleanse it of the evil. Twenty eight days after moving in, George and Kathy Lutz, their children and the family dog fled the home and was said to never returned again. Some say in fact, this is not true. Some say they actually did return a few months later to gather some of their belongings. The house now has a new appearance and address, with trees covering the front. The “evil eye” windows have been changed to square ones.

Nevertheless (after some advice from investigators, a priest and a lawyer), they sold the story to an editor that did not want to show his name as an Author, but handled the writing anyway. His name was Jay Anson and he later wrote the book, The Amityville Horror, in which this film was based. The book and film are said to be extremely over exaggerated and far from the truth of what really happened in the home. The Lutz also ran into trouble from a few different sides for their story. Their personal lives were affected as well. Actual residents of the home have said the scariest thing about the home has been the many wandering and curious trespassers onto their property. The movie was the highest grossing independent film for eight consecutive tears until it was knocked from its throne..

The film is awesome and still stands today as one of the best ghost stories and Horror films ever made. A creepy atmosphere, dark throughout and the acting is for the most part, superb. Margot Kidder (of the original Black Christmas) does a fantastic job as Kathy Lutz. James Brolin (who got his start in acting from truck commercials) does an awesome job as George as well. He goes from loving father… to almost evil bastard. The children, for their age, also act their parts very well.

This film has remained one of my favorites as practically a baby. It has not left my collection every since. He sequels are also included. Of course, none of the sequels live up to the original, based after the book. In my opinion, this is the monster of haunted house films. One that in the Horror genre… cannot and must not be ignored. Some of the current residents of Amityville, Long Island would beg to differ and are not too keen on (and some are not kind to) the continuous, year after year stream of curious visitors to this legendary home.

The Amityville Horror is filled with haunts and disturbing imagery that were original for its time. Which such gags as the bleeding walls, the herd of flies that swarmed the priest in the sewing room, the crumbling holy statue in the eyes of the Priest… and of course, there’s the now infamous verbal command of the home… “GET… OUT!” The house is alive, and it’s pissed. The score is creepy and soothing at the same time. It sets the tone to let the hauntings begin. The sounds of drums are also used in a fright inducing manner, as they subtly play form the living room as the Lutzes sleep.

On the set of filming, it is said that the crew made up different ghost stories to tell the press. The media ate it up with a silver spoon. There were psychics called to the home after the Lutzes fled to investigate the occurrences. Some say nothing happened, others beg to differ. One reporter (that spent the night in the home) said that the true fright came from viewing the film in the theater with the pot smoking crowd.

There are some of the actual story that the movie did not tell in the right light. I am a stickler for the truth in true stories. “The red room,” as it was called, was known as “the gateway to Hell” in the film. In actuality, it was a play room built by the family that lived in the home before the Lutzes. The family that is mentioned at the very beginning of the film. Also, the bartender said that George reminded him of the kid that lived there before him. He was arrested sitting in that same spot. That is also untrue. He was arrested at the prison as he was kept for protective custody. Which brings me to the story of the prequel. The proven true history of the house. The story that many called the real Amityville Horror… The original has spawned many sequels (and the re-make). The Amityville Horror II: The Possession, The Amityville Horror 3-D, The Amityville Dollhouse and The Amityville Curse… also based off of a novel by Hanz Holzer, a Paranormal Investigator that also spent the night in the home). Part two: The Possession is still very over exaggerated, but gets closer to the truth of the home than any other sequel (with the exception of the demonic possession and the way the family was murdered)… The Defeo family (or as known in The Possession, The Montelli family)…

In November of nineteen seventy four, the prior owner of the home’s eldest son, Ronald “Butch” Defeo Jr.., killed his entire family as they slept in their beds (in the sequel, the killing did not quite go the way as it truthfully did). He was sent into the station for police protection after telling authorities that a hit man killed his family. From there, he has never left. He had several other stories of how his family was murdered that night. It happened in a very different way than explained in the original and its sequel. Some even say his eldest sister helped, but that has not been proven with solidarity and the possibility was thrown out in court, due to his original confession (… a first of many) A prequel to this film about what truly happened in this now infamous house needs to be made (112 Ocean Avenue for bid now at www.abbotmanagement.com).

All in all, The Amityville Horror is a movie that actually, you should have already seen. If you have not, shame on you ( not two thousand and five re-make, which changed the story line and even the address of the house… I’m talking about the original). The frights of the home have held up after many years and will never cease to exist. This film should be in the dvd (or video) library of every Horror fan. Maybe it will be the “doorway” into your childrens’ lifelong dimension of Horror as well. I give this film, The Amityville Horror, FOUR IMMORTAL HORNS UP.