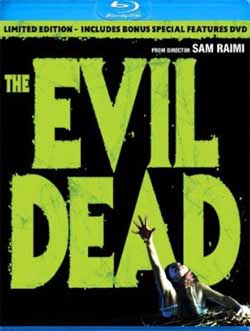 “Five friends go to a cabin in the woods for a vacation. They discover The Book of the Dead and a tape recorder belonging to a professor, who also owns the cabin. One of them plays back what is recorded on the tape– which just happens to be Candarian resurrection passages translated from the Necronomicon (Book of the Dead) by the professor, which unleashes an evil force from the woods. The people start turning into evil deadites, and the others soon learn from the tape that the only way to kill a person who is turned into a deadite is by total body dismemberment. People are dying left and right; one girl early in the film looses control and runs off into the woods, only to be raped by the trees.”

“I wanted to be a meteorologist in the seventh grade,” said director Sam Raimi to Fangoria magazine. “I took a meteorology course. Then I wanted to be an airplane pilot. Then I took one of those pre-SAT’s in junior high school. They told me to forget about it, that I should be a handyman, a guy who troubleshoots washing machines. So I started making Super-8 movies, but I never thought you could really do it as a profession.”

It wasn’t until college that Raimi changed his mind. “I was in college studying literature and history and, of course, forestalling a career trying to make as many movies as I could. I was expecting to drag out my college years and then take a real job doing something else. And then Rob (Tapert) said, ‘Why don’t we make a feature film, since we seem to be doing it in Super-8?’ I thought, the poor sap doesn’t realise it isn’t possible – I’ll play his game until he finds out, because I’d hate to be the one who says no. But we talked about it more and more over long nights in the apartment. Finally, we got evicted because we were playing our Super-8 movies too loud. It was either find another apartment or go into the movie business.” Raimi dropped out of college to set up Renaissance Productions with high school friends Robert Tapert and Bruce Campbell.

The three amigos made a thirty-minute Super-8 version of The Evil Dead (1981) called Within The Woods to show to potential backers. “We’d make people sick then ask them to invest,” said Raimi. They made them sick enough to part with US$430,000, and Saturday the 11th November 1979, cast and crew headed for the hills. 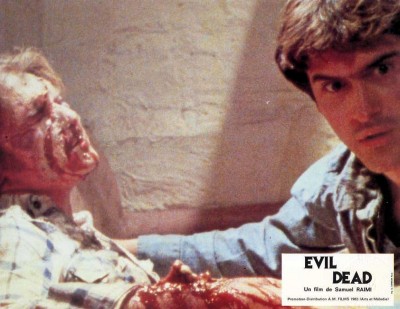 The Tennessee Film Commission had scouted isolated locations for the production but when Raimi, Tapert, Campbell and the small cast and crew of friends arrived on-set, they found the cabin they had intended to shoot in was unavailable. They made do with another cabin outside of Morristown, but it was in such a bad state that it took eight days to repair, and the place was covered with six inches of cow dung. While some of the crew shoveled sh*t, the rest shot the opening driving scenes. 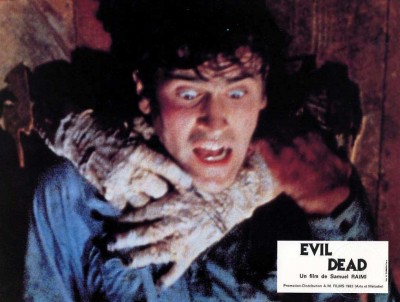 The worst was yet to come. Raimi’s shooting style – described by one crew member as meticulous – was causing the production to fall behind. Raimi would often spend hours shooting an insert shot while failing to cover the scene with a master shot. To add to the cast and crew’s irritation, most of the shoot took place at night in freezing temperatures.

But Raimi’s approach yielded results. His inventive camerawork made The Evil Dead stand out from the horror crowd. “We couldn’t afford a Steadicam, so we improvised,” said Raimi. “We mounted the camera in the middle of a two-by-four about fifteen feet long. A couple of guys grabbed it, one on either end, and they just ran like hell.” Theoretically it’s not a bad idea although, in practice, Robert Tapert kept smashing into trees. 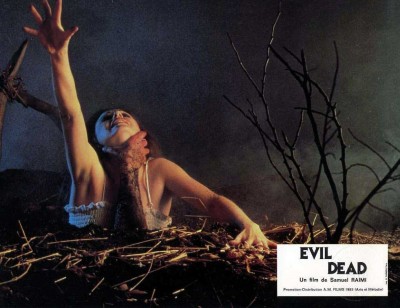 Cast and crew soldiered on until 26th January 1980. After completing principle photography most of the actors left the production. However, there was still much of the film left to complete. Raimi was left to finish the second half of the film with Bruce Campbell and various stand-ins (or ‘shemps’) replacing the actors who left. 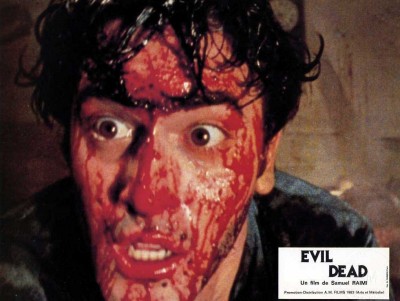 The Evil Dead almost didn’t get released. Every major distributor passed on Raimi’s gore-fest, even Paramount, who had recently found success with Friday The 13th (1980). Raimi had just about given up hope when author Stephen King saw the film at the 1981 Cannes Film Festival and published a glowing review in The Twilight Zone magazine titled The Evil Dead: Why Haven’t You Seen It Yet, And Why You Ought To. King wrote “What Raimi achieves in The Evil Dead is a black rainbow of horror,” praising the simple story, effective makeup, and exhilarating cinematography, saying of Raimi’s fluid camera work, “Somebody ought to tell Kubrick, Spielberg, et al, that there’s really nothing to this stuff. Just bolt the camera to a two-by-four and run like hell.” 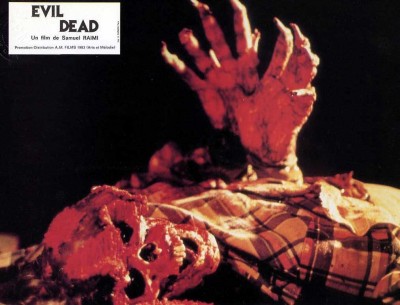 Raimi told Fangoria magazine, “Stephen King helped immeasurably. We were just another little horror picture, and it could have remained that way, until he said ‘No, I like this picture, it’s different to the others’. He put a spotlight on it.” Thanks in part to King’s attention, and the success of the film outside the USA, Raimi signed a US distribution deal with New Line Cinema. The rest, as they say, is horror history. The film became a cult classic which inspired at least two sequels and launched Sam Raimi on an unsuspecting world.

Before I bid you goodnight I’d like to profusely thank both Fangoria and Twilight Zone magazines for their excellent reportage and assistance in researching this article, and look forward to your company next week when I have the opportunity to freeze the blood in your veins with more sickening horror to make your stomach turn and your flesh crawl in yet another fear-filled fang-fest for…Horror News! Toodles!

The Evil Dead Blu-ray™ (Disc 1) contains an all-NEW audio commentary with Writer/Director Sam Raimi, Producer Robert Tapert and Star Bruce Campbell. A standard DVD (Disc 2) contains the following bonus features, many returning for the first time in years, and available only for a limited time:

So pick up The Evil Dead on Blu-ray™, steal away to your favorite secluded cabin and see this horror classic like you’ve never seen it before! 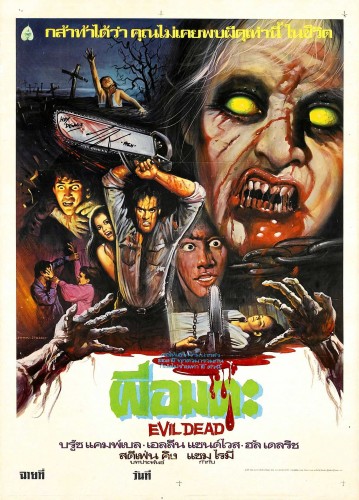