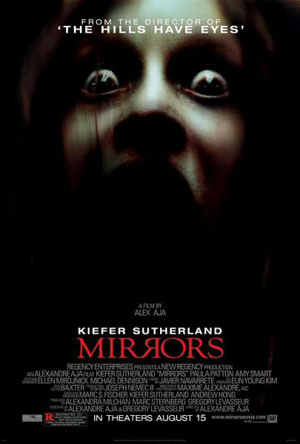 This creepy supernatural thriller from director Alexandre Aja stars Kiefer Sutherland as troubled security guard Ben Carson, who discovers malevolent spirits living within the mirrors of a fire-ravaged department store. When their murderous nature comes to light, Ben turns to his estranged wife (Paula Patton) to help him save their family — and himself. The supporting cast includes Amy Smart and Jason Flemyng.

I had a good day today. I took a chance on the new “Mirrors” film and came out a winner. I like Keifer Sutherland as an actor. So when he does a horror film here and there it’s usually a good thing. “Mirrors” did something that was obvious and went for it. In this case, taking an object as simple as a mirror and making it feel really creepy. In fact, I bet after watching this film you might do a double take now and then. It sort of gave me that same feeling I had after watching “The Ring” and the telephone rang.

To get to the plot. Keifer is a retired cop who takes a job at a eerie burnt up building to make ends meet. He’s struggling with a past alcohol problem and a separation from his family. While living with his sister Amy Smart he tries to get his life together and cope with a prior police incident that left a man dead.

Apparently this new job comes with a few demons. Namely mirrors that reflect pain, suffering and things that rent really there. Enough that it can kill you on its own. It progress as a plot unfolds and we are taken more into what may have caused all this reflective chaos.

Now the cinematic style of using mirrors is a pretty simple effect for those who edit or make films. Basically you cut and edit in diff views or mask off portions of the footage with new footage providing that the camera angle is done right. However without dynamics the effect can sink or swim. In this case ,it was done with precision. The cuts were jarring and the Effects worked like a charm. I’m going to have to say “Mirrors” is a must see for horror fans. All the bell and whistles line up and the presentation is solid.

Those who have been dealing with failed rentals and crappy plots will really get a kick out of this film. Within the first 5 minutes you know what your in for and then combine that with some really brutal scenes through-out and you’ve got yourself a night of terror. A few times I caught myself saying ..ok this is what’s happen, and then it didn’t. Meaning that refreshingly enough it breaks the intuitive route and goes for the road less traveled. Including a trick ending and a really painfully creepy demon that would give Linda Blair a run for her money. The FX were outstanding and the plot was well shot to really make the whole reflection angle sing with precision planning. Mirrors is solid piece of modern horror, hands down.

I’m not sure if the building was a set or real but it certainly was a prime location for creepiness. Now if my intuition is correct you may just end of seeing a bunch of copy cat films following suit to make there mirror movie, so don’t say I didn’t warn you. Regardless “Mirrors” stand alone as one the creepiest reflections of evil I’ve seen in along time….How’s that for a quote? I’d easily put it on my list this year as one of the best!