A group of people are trapped in a large West Berlin movie theater infected by ravenous demons whom proceed to kill and posses the humans one-by-one thereby multiplying their numbers.

For many horror fans, the nineteen eighties was a premiere time for horror flicks, offering a bevy of them, some more well-known than others. It was a time when Dario Argento, probably considered the best Italian horror director, gave us his masterpiece Zombi or Zombies (you know, that film with the woman being pulled through the door and having her eye slowly impaled with a chard of wood). Little do many know that he also gave us Demons, a film with a completely different premise in only that the monsters aren’t out to eat you and only to possess you. While the subject is different, the same Argento feel and gore is prevalent even though he didn’t direct, and it makes for tremendous fun. 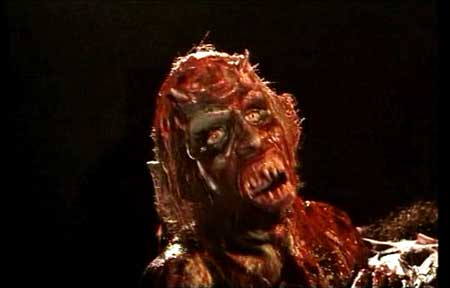 Setting the stage very quickly, the film makes a valiant, and quite good attempt at portraying Berlin as a gothic locale and combining it with modern day pink haired punks clustering along on the subway giving the film a modern feel. However, immediately after embarking from the train, the audience is feeling that something isn’t quite right as Cheryl (Natasha Hovey), fearful and alone in the subway station is somewhat menacingly followed by a silver half-masked man (picture Cirque Du Soleil). Little did we know that until he confronts her, the scenario was completely harmless? We also feel her relief when he simply hands her a grand opening golden ticket for the Metropol, a closed for decades and now newly opened movie theater. Without saying a word, the man walks away, leaving both her and the audience somewhat intrigued and sitting up to take notice. 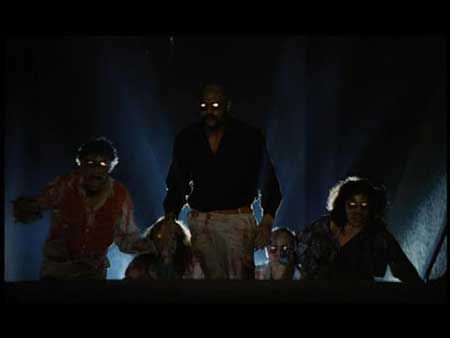 She approaches him requesting a second ticket for her friend and this is where the movie basically takes off. Of course, had she known that the theater was going to be full of demons wanting to possess the viewers in order to increase their numbers she probably wouldn’t have taken the initial ticket at all. Why the demons are doing this we never know, but who cares, they are and that’s what matters.

While the eighty-eight minute movie itself isn’t nowhere near what you would call scary, director Lamberto Bava, the son of highly acclaimed horror genius Mario Bava, has learned a thing or two from dear old pop and creates a good campy fun film with over-the-top acting, clichés, and an eighties heavy metal soundtrack that most music fans will even find obscure. Toss in a dirt bike sword swinging George (Urbano Barberini) viciously severing limbs, a very gross puss scene and a gory fight to the death film climax and you have all the makings of a true horror connoisseur’s dream. 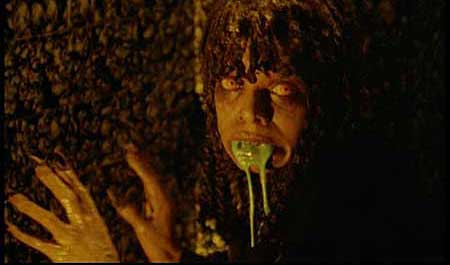 Unlike constantly maintaining horrific scenes like those in classic films like The Exorcist, Night of the Living Dead or The Omen series, this film is classic in that it plays to the light hearted and at most times is quite laughable. For example, a blind man who initially is seated in the theater being told a film play-by-play by his wife eventually gets his eyes scratched out by a marauding demon. 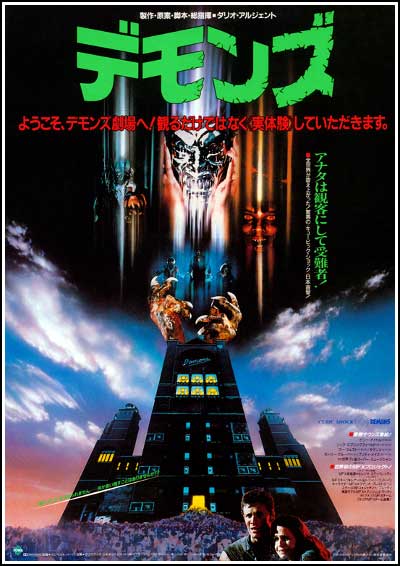 Nowhere near was top of the line cinematography employed and the dialogue is far from being perfect. There isn’t a deep rooted message being subtly encased and the special effects may leave a lot to be desired. And, many viewers will probably select one of these aspects when negatively discussing the film. Regardless, they will be discussing it and probably comparing it to the latest big screen blockbuster. None-the-less, this film is fun to watch and maybe even worthy of a few subsequent viewings, or even more depending upon taste in movies. 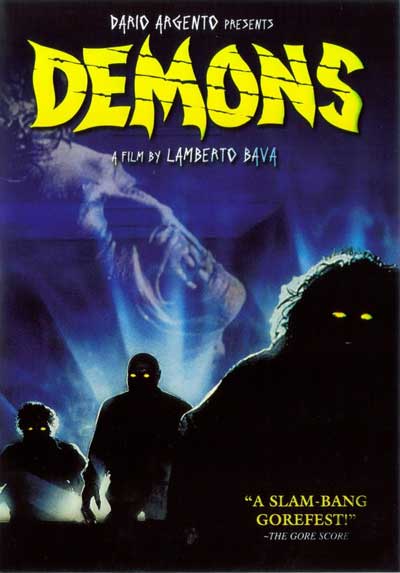 While Demons may not appeal to everyone, and those who are seeking say, an eighties classic such as Halloween or Friday the 13th are certainly in for a letdown. Although, by keeping an open mind and a sense of humor, all hope is not lost and who knows, maybe the viewer will actually enjoy it. Modern it isn’t, but for the true fan of horror…it is.