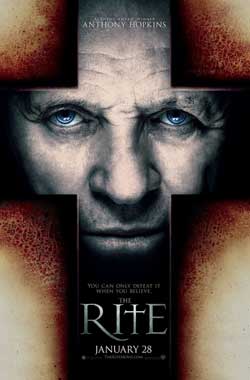 An American priest travels to Italy to study at an exorcism school where he is introduced to a mysterious exorcist.

So much snow on the ground dear readers. Some would say too much snow. I am one of those people. The skies have been very angry over NY as of late and all they do is block out the Sun (which I don’t mind) & drop these cursed flakes of frozen precipitation all over the city. My mausoleum is completely snowed under & my acolytes are all calling in saying they’re snowed in as well. That leaves me & only me to shovel snow from the front of the mausoleum. Why do I do this? So I can give you the heads up on the latest fright feature to open at the local cinema. But after sitting through “The Rite“, I have to wonder if it was all worth it.

New Line Cinema’s “The Rite” tells the tale of Michael Kovak (Colin O’Donoghue), a young man who works with his dad at his funeral home. The film opens with Michael preparing a body for interment & I was actually a little pumped up watching it. The opening scenes of Michael preparing the body were fascinating to me. Call me sick if you like but I thought they were kinda cool. I’ve seen autopsies before but I’ve never seen the act of sewing the lips shut (after filling the mouth with straw), putting in the contacts, dressing the body, etc..etc. I felt a tinge of excitement during these scenes thinking the movie has started off fairly well. It seems that Michael & his father Istvan (Rutger Hauer) are at odds as to what he’s to do with the rest of his life. His dad has laid down the law & has told Michael that it’s either the family business or seminary school. Michael decides to go to Seminary school figuring he’s getting a 4 year college education & towards the end of it he can bail on his obligation to the church. But he’s informed that if he leaves without fulfilling his obligation to the church, the church can pin the bill on him ($100,000). That changes Michael’s mind & he decides to take one of his advisors suggestions & go to study exorcism in Rome for a few months.

In Rome, Michael takes the suggested courses in exorcism & these scenes while slow are intriguing. The exorcism classes are set in a large hall much like a college class but with some evocative blue & white lighting & the teacher, Father Xavier (Ciaran Hinds), has a certain air of authority about him. He introduces the class to videos of actual exorcisms & although we the audience don’t see too much of the video, we see the reactions of the students & we HEAR what they’re seeing & it’s genuinely frightening. I was especially pumped when Xavier showed the students photos of victims of demonic possession as they were especially eerie to see. I wonder if they were actual photos? In any case, Michael is a bit of a skeptic & constantly suggests that perhaps these people have psychological problems. It is then that he is dispatched to meet with Father Lucas Trevant (Anthony Hopkins).

Now a quick word on Mr. Hopkins if I may. I am a big fan of his & always have been. His presence in a film automatically brings it up a notch in my book. But as of late it seems to me that he is still essaying the role that put him on the map forevermore. Of course I’m talking about Hannibal “The Cannibal” Lecter. Lecter is one of the greatest villains in screen history and what makes him especially villainous is the fact that audiences actually sided with him throughout the “Hannibal” trilogy (“Hannibal Rising” doesn’t count, & it sucked anyway). Hopkins made Lecter a fiercely savage individual capable of seemingly anything he needed done. Whether this was due to his intellect or his mania is up for debate, but at the same time Lecter could be tender..almost kind, to those who he felt were worthy. Unfortunately he didn’t run into many worthy people throughout the trilogy. Hopkins scored so many point in his portrayal of Lecter that it seems to me that he’s fallen prey to the “If it ain’t broke, why fix it”? axiom. The same one that has befallen great actors (Pacino, DeNiro) & sucky ones (Kevin James, Adam Sandler, Chris Rock), interesting how the sucky ones were all comedians before they were “Actors”. Hopkins seems to be playing lecter or at least a variation of him in everything he’s done since then. Let’s see, “The Wolfman”? Lecter in London, “Beowulf”? animated Lecter, “All The King’s Men”? Lecter as a judge. I could go on (seen the “Thor” trailer yet? Lecter as a god). This doesn’t mean to say I’m still not a fan, I’m just tired of seeing the same performance time in, time out from him lately. 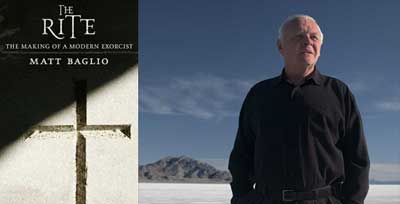 So of course, when father Trevant is introduced to the audience, we get the same twitchy, mumbling under his breath only to build to a loud crescendo character that Hopkins seems to feel all his roles demand of him. Lucas Trevant is an odd sort, living on his own with a bunch of cats he apparently doesn’t like too much.and talking in quick bursts of sinister sounding soundbites only to fade back into a creepy whisper when he feels it’s appropriate. The character is sinister yet seemingly kind all at the same time. The film claims at the outset that “Satan is alive and well” in the beginning and Trevant is on board with that supposition. During Michael’s visit with him he is introduced to Rosaria, a young woman who is pregnant & according to Trevant, possessed as well. There is a short ceremony that follows & then the girl just up & leaves. Kind of like a doctor’s appointment. When Michael asks what’s happening, Trevant responds “What did you expect? Heads spinning? Pea soup”? To tell the truth, I was expecting some serious “Exorcist” type of shenanigans based on the trailer. But “The Rite” isn’t that kind of movie, much to my disappointment. It is supposedly based on a true story & while I guess that maybe in actuality demonic possession isn’t as cinematic as certain film have made it seem, that doesn’t mean it has to be boring. And ultimately, boring is what “The Rite” ends up being from this point on. 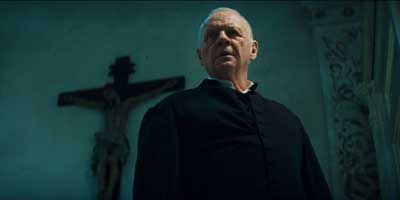 All of the buildup that the beginning of the film brought to us is wasted on cheap scares like cats jumping out of closets & people suddenly appearing where they weren’t a second earlier. All of these “frights” are accompanied by big blasts of music that’s supposed to make us jump in our seats and they actually did at the screening I attended. A few of the less hardy of us in the audience squealed whenever these moments occurred. But I found them rote & uninspired, where’s the Devil? Where’s the spinning heads? Where’s the desecration with a crucifix? “The Rite” wants to be a more literate exorcism film based on facts, but it isn’t presented in that way in the trailers cut for it & it suffers because of this. It might or might not be true, that’s not for me to say. But I can say that if it is indeed factual, then being possessed is kind of boring. I actually fell asleep in the middle of the movie, which is something The Black Saint never does. Especially when a film starts out with so much promise. But “The Rite” loses it’s way with a whole lot of exposition & not enough exploitation for me to keep my eyes open for a few minutes (I didn’t miss anything of substance either, I asked my buddy who saw it with me).

We are introduced to Alice Braga as Angeline, no last name..just Angeline. She plays a reporter who’s trying to get to father Trevant to interview him on the truths behind exorcism. she’s there basically for eye candy & nothing more. She’s not a sexpot but she is sneakily attractive & I thought that was a good choice for the character. There are some fireworks hinted at between Angeline & Michael but he’s a priest now, remember? So no sexual escapades here between the two except for some sly stares between them & sultry grins from both of them on occasion. It might have helped the film a little bit if there were some fireworks between them. Anything to keep me awake because the exorcism aspect of the film is sorely lacking.

Colin O’Donoghue is appealing in the role of Michael & so is Braga in her (ultimately) wasted role. And Mr. Hopkins just does what he does. He does it well no doubt but he is fast becoming a one trick pony in my eyes & I for one am not happy about it at all. He needs a better agent. The film begins well starts to build up into something that seems to be ready to kick our collective asses & then turns into basically a SYFY original movie with some great cinematography and some halfway decent performances. But ultimately “The Rite” fails for one reason and one reason only. It isn’t the least bit scary. At all. Apparently when you are possessed your eyes turn white & your face gets sort of black with veins protruding all over your body. That happens to me after drinking a bottle of JD without fail. Throw in some drugs & then I’ll start saying some sh*t in latin & spinning my head around too, never mind the multicolored vomit. I was decidedly unimpressed with the film after the first half hour & the film is just shy of 2 hours long so it was a long fall to the end of the movie for me. But in all fairness, the cinematography is excellent & the art direction is very apropos for the story. Director Mikael Hafstrom does a good job with his actors except for Hopkins who I believe was just allowed to chew up scenery at will because of who he is. I guess he’s earned that but it doesn’t make it right. There is a scene towards the end of the film where Hopkins & O’Donaghue start to yell at each other face to face that really reminded me of “Dueling Banjos” that made me laugh, but it wasn’t supposed to be funny. It seemed to me that O’Donaghue was trying to outchew Hopkins but Tony doesn’t go down without a fight for sure. But “The Rite” is wrong on so many levels that unintended laughter doesn’t help it’s cause. Perhaps if they called it “The Maybe”….

The Black Saint sadly has to give “The Rite” 1 1/2 shrouds out of 5. Those are for some good performances & atmosphere. But it fails on just about every other level. Perhaps if they used Braga or Hauer a bit more. How can you have Rutger Hauer in a movie & basically ignore him after the first 20 minutes? Imagine him & Hopkins in a scene together…so much potential magic wasted. O’Donaghue is a likable sort & I’d like to see more of his work in the future but all of the other principal actors are either wasted (Braga) or basically forgotten about (Hauer). It’s basically the O’Donaghue/Hopkins show & Hopkins don’t take no second billing to nobody. I really wanted to like “The Rite” & apparently so did a lot of other people (the theater was about 1/3 full for a matinee show On a very messy Afternoon in NY) so it might do some decent numbers this weekend. But once word of mouth gets out, the box office tally will fall like the snow’s been falling here in NY…hard & fast. So if you’ve got some disposable income to spend this weekend & want to see a scary possession movie, rent or buy “The Last Exorcism” or “The Exorcist” instead. Both (especially “The Exorcist”, the holy grail of Satanic possession movies) of them are far more deserving of your shekels than “The Rite”.