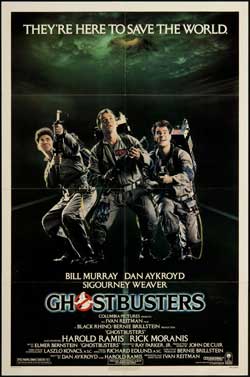 Starting in late 1983 and into the following year moviegoers were alerted to the notion that “They’re Here To Save The World” & “We’re Ready To Believe You”. The question was who were the people these teaser posters were talking about? Well they were talking about Dan Aykroyd, Harold Ramis, Ernie Hudson & Bill Murray who together made up the Ghostbusters, Three unemployed parapsychology professors (& an employee) who believe that something evil is going on in NYC and intend to stop it by any means necessary.

Dr’s Raymond Stanze (Aykroyd), Egon Spengler (Ramis) & Peter Venkman (Murray) become unemployed after a failed encounter with a ghost in a library. The trio decide to start up a sort of exterminator business afterwards in which they would capture & store pesky poltergeist. They rent an abandoned firehouse and develop high tech detection devices and some extremely unstable weaponry in order to find and debilitate all types of ghosts. But thanks to an unbelieving public and a rapidly shrinking bank account they are nearly out of business as soon as they officially open up shop. But thanks to a call from a haunted hotel (During which they messily catch their first ghost) they find some measure of success and the name GHOSTBUSTERS is soon on every New Yorkers lips. 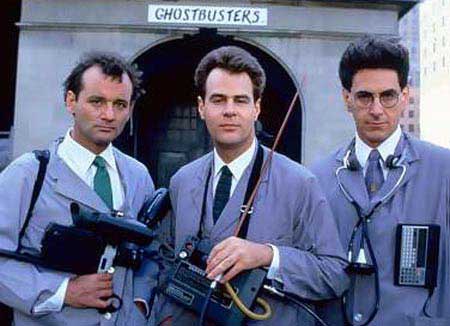 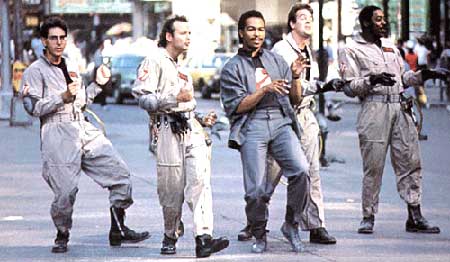 All of a sudden NYC is just filthy full of all kinds of ghosts and the boys get so busy that they have to hire a fourth member, Winston Zeddmore (Ernie Hudson), to help them out. As they continue to capture ghosts their specially designed containment unit is filling up and is getting dangerously close to maximum capacity but there is no time to worry about that as they are hired by Dana Barrett (Sigourney Weaver) to investigate a demon living in her refrigerator(!) named Zuul aka “The Gatekeeper” who is awaiting the arrival of Gozer the Gozerian, a Sumerian god of destruction who wants nothing less than to conquer the world and he plans on starting in NYC.

Peter takes a romantic interest in Dana but has competition from accountant Louis Tully (Rick Moranis) who eventually becomes possessed by Vinz Clortho aka “The Keymaster”. Once the keymaster locates the gatekeeper they will usher Gozer into this dimension and the Earth will be lost. Meanwhile the EPA sends a lawyer, Walter Peck (William Atherton), to investigate their containment device which is nuclear powered and he summarily has it shut down over the objections of the ghostbusters who warn him that shutting it down will release the horde of spirits that they’ve captured. Now in addition to the looming threat of Gozer to deal with, the team has to wrangle up hundreds of malicious (& ANGRY) ghosts terrorizing NYC. It all culminates in a showdown on top of Dana’s apartment building where both Dana & Louis transform into demonic dog like creatures and Gozer is brought back to Earth in a form that’s both unexpected and hilarious. 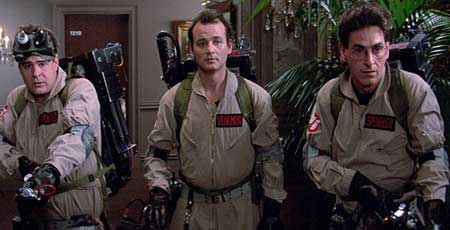 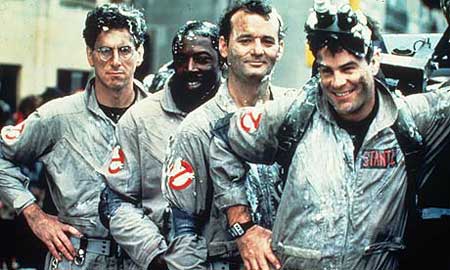 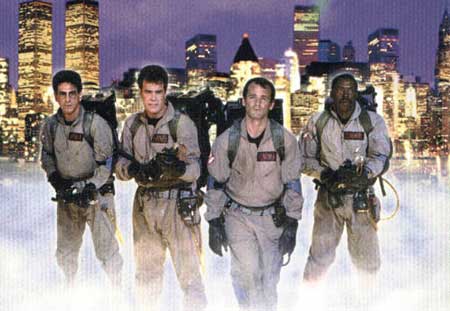 Scripted by both Aykroyd & Ramis, “Ghostbusters” is a near perfect melding of comedy, sci-fi and horror. Watching it now it’s impossible to imagine anyone else playing the Ghostbusters but initially Aykroyd had John Candy, John Belushi and Eddie Murphy playing the roles but to imagine anyone else in the role of Venkman other than Bill Murray is ludicrous right now. His performance above all others makes the film especially funny. He has a wonderful deadpan shtick that works perfectly for his character and he ad libs some hysterical bits throughout the film. Aykroyd plays Stanze as an especially eager scientist who has a ton of parapsychology smarts but not too many real world ones. Ramis gives Spengler a haughty know it all vibe that works well when he’s with the others and he has a wonderfully ingratiating smirk. Hudson’s Zeddmore doesn’t actually have that much to do besides tag along the others and offer up some innocuous comments every so often but he does that very well and he doesn’t slow the movie down. Sigourney Weaver and Rick Moranis also essay their roles with great relish (Moranis chews up as much scenery as humanly possible).

“Ghostbusters” turned out to be a massive box office hit. It was the biggest grossing comedy in history for a short while and spawned an animated series, comic books, video games and the inevitable sequel (Although it took five years for that to arrive). The special effects were top of the line and helped to sell the idea of a busy metropolis infested by malevolent spirits. The climax (Which features a giant marshmallow man with a grudge) is both exciting and gut splittingly funny as well. But watching it at home on either DVD or Bluray really kills some of the effects as the matte lines are really evident and some of the miniatures look just like that…miniature. 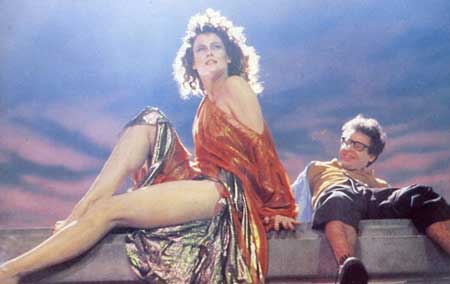 But that still doesn’t kill the experience of watching it at home. I had a great time reliving the adventures of the boys as they tried to save the world and I had forgotten how truly witty the script is. Some of the lines have gone on to be quoted continually over the years as well. “We Came, We Saw, We Kicked It’s Ass”, “I Got Slimed” and “Who Ya Gonna Call? GHOSTBUSTERS”! are part of the national lexicon. The theme song by Ray Parker Jr. was a worldwide hit and elmer Bernstein’s score was both whimsical & majestic. Laszlo Kovacs provided a wonderful look to the film also, you’d have to watch a Woody Allen movie to see NYC look any lovelier. 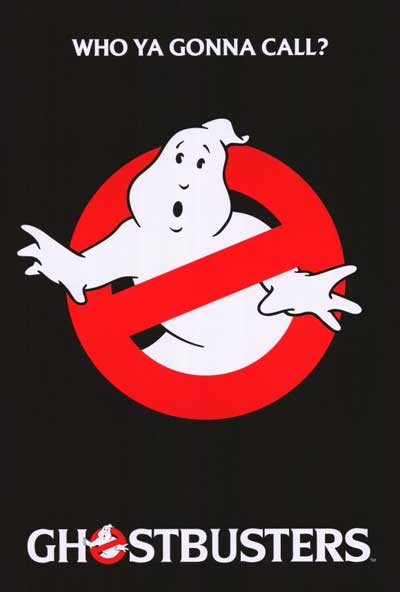 Although it might look a bit hoary and shopworn to someone who’s never seen it today, “Ghostbusters” is still first rate entertainment & represented the pinnacle of Hollywood special effects at the time of it’s release. It’s just as funny as it ever was and if you can get past some of the cornier looking effects..still a marvel to look at. It might even manage a quick little “Jump” scare out of the uninitiated few who haven’t yet succumbed to it’s charms. To me it represents a near perfect melding of comedy/horror/sci-fi and has yet to be bested in that regard, it was like nothing anybody had seen before and it deserves respect for that. The only film I can think of that equals it’s inventive use of comedy & horror is “Abbott & Costello Meet Frankenstein” and that’s an all time classic, and so is “Ghostbusters”!