More films of interest collected under the theme of “Paranormal Investigators”, this bunch takes on the entities and specters lurking within the great unknown. While there is no shortage of ghost busting going on in the TV world these days, it’s always more fun to watch the fiction based hunters taking on all sorts of dark cretins. Let’s jump right in faster than you can say: “Kolchak: The Night Stalker” or “Sam and Dean Winchester”, we present “The Top 10 Paranormal Investigators in Movies, Film and Cinema”

The Conjuring is officially a summer blockbuster, taking in over $107 Million in the U.S. alone (as of August 10, 2013), a phenomenal feat for a supernatural film coming out mid-summer amongst a bevy of big-budget tent pole films with big stars attached. James Wan is a master of suspense and fear with Insidious, Saw and the often overlooked Dead Silence behind him. With The Conjuring, James Wan and writers Chad Hayes and Carey Hayes spotlight one of the cases from true life paranormal experts, Ed and Lorraine Warren, played by Patrick Wilson and Vera Farmiga. The story draws the pair into the home of Roger and Carolyn Perron (Ron Livingston and Lili Taylor) to investigate claims of being haunted. From there, things get far worse than initially feared as an evil spirit begins to fight for the lives of the family and threaten the Warrens as well.

The Conjuring is far from the first film to feature paranormal investigators, ghost hunters. In fact, the film owes a great deal to many of the cinematic presentations that have reached the big (and small) screen before it. However, Ed and Lorraine Warren are perhaps the very models for many of those representations as well. What goes around comes around. Below is a list of ten (10) feature films to chase after to get your fill of ghost hunters in film. Not the Peter Venkman, Raymond Stantz and Egon Spengler’s of cinema, but those closer to the tone and of the Warrens and, perhaps, Grant Wilson and Jason Hawes of SyFy’s popular Ghost Hunters TV show. Although, the guys from Ghostbusters would be an excellent inclusion in any list! Let’s take a look as 10 other Paranormal Investigators in Film. 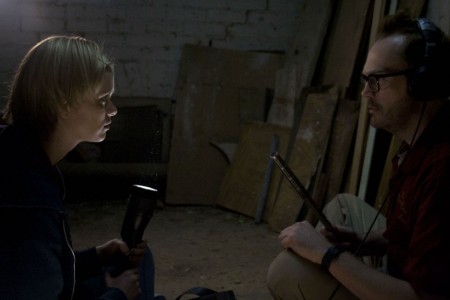 01 – Clair and Luke – Innkeepers (2011)
Clair and Luke (Sara Paxton and Pat Healy) are the ghost chasers in all of us. They are the amateur paranormal investigators. They work in a spooky old hotel with a history of creepy tales of possible hauntings. They take it upon themselves to wander the halls in search of ghostly evidence of the supernatural. It’s the dream of any horror movie fan, to experience a haunting, to see a ghost, first hand. But in Ty West’s Innkeepers, they get a little more than they bargained for as Clair befriends the hotel’s final guest, Leanne Rease-Jones (Kelly McGillis) and begins to uncover horrific secrets the hotel has held undisclosed for decades.

02 – Lance Preston – Grave Encounters (2011)
In the past 10-15 years, TV has afforded a variety on docu-drama shows about the paranormal. In Grave Encounters, directed by the Vicious Brothers, Lance Preston (Sean Rogerson) is one of those spectacular show hosts that goes into haunted house after haunted house across the nation searching for evidence. But, for Lance and his team, Sasha Parker, Matt White, T.C. Gibson and Houston Grey, they find themselves trapped inside a nightmare when they investigate the abandoned psychiatric hospital, Collingwood. With no escape, every door is either locked or leads them back into the hospital, the crew begin to fall victim to the ghosts one-by-one until the secret is revealed and their destinies are sealed.

03 – Mike Enslin – 1408 (2007)
In the adaptation of Stephen King’s short story 1408, directed by Mikael Hafstrom, Mike Enslin (John Cusack) is the skeptic, the non-believer, the nay-sayer who searches out stories to purposefully disprove them on a destructive course to deal with the death of his young daughter, Katie. Unlike all the others on this list, Enslin is the only one who does not search for actual paranormal activity or at least with any hopes of actually discovering proof. Deep down in his troubled psyche proving it does indeed exists may be exactly what he wants to do. When he tackles the haunted room 1408 in The Dolphin in New York City. What he finds in the room is far more frightening than any ghost tale and may hold revelations that he is far from prepared to face.

04- Margaret Matheson / Tom Buckley – Red Lights (2012)
With Rodrigo Cortes’ Red Lights, audiences are introduced to a pair of paranormal researches associated with the parapsychology department of a respected university. Margaret Matheson (Signourney Weaver) and Tom Buckley (Cillian Murphy) represent those who take the unknown seriously, who are treated seriously as leaders in the field, those who approach the paranormal academically, theoretically and metaphysically. They are experienced have encountered the paranormal first hand leading the charge to capture evidence to prove its existence. In Red Lights, they investigate others who claim to be experts typically exposing them to be frauds and charlatans. However, Simon Silver (Robert De Niro) is proving to be the mysterious piece of the puzzle with the pair struggling to prove his supernatural gifts or expose him to the world.

05- Frank Bannister – The Frighteners (1996)
In Peter Jackson’s horror comedy, The Frighteners, Frank Bannister (Michael J. Fox) is well aware of the paranormal. He can actually see and communicate with dead spirits. He begins the film using his gifts to con others into forking over small fortunes to speak with their dead loved ones, to receive that message from beyond the grave. He is content with his small petty life, hiding behind the charade to avoid the pain and guilt over the death of his wife Debra. It is only when he discovers a mysterious hooded figure involved with a number of unsolved deaths, that he begins to change his ways and become the paranormal investigator he truly wants to be. 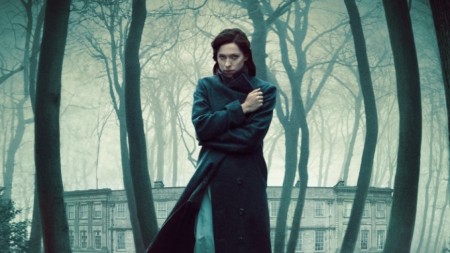 06- Florence Cathcart – The Awakening (2011)
In the Awakening, directed by Nick Murphy, Florence Cathcart (Rebecca Hall) is a highly respected author on supernatural hoaxes. Intelligent and gifted, she is able to reveal the means and tricks used to fool unsuspecting grieving victims. Even the police use her skill set to serve and protect. It is her acclaim in this field that draws the attention of Robert Mallory (Dominic West) from a remote boarding school that is dealing with a haunting. A ghost who has seemingly claimed the life of one of the young students. Reluctantly, she travels to the school to begin investigating only to uncover a horror unimaginable. 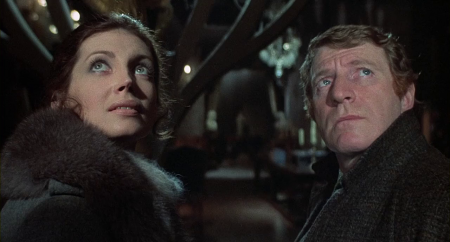 07- Dr. Lionel Barrett – Legend of Hell House (1973)
Richard Matheson’s novel turned film, Legend of Hell House from director John Hough, follows a respected Physicist Lionel Barrett (Clive Revill) who is hired to investigate the Belasco House, called the “Mount Everest of haunted houses.” His goal is to prove that there is an afterlife, there is something out there after death. The secret is believed to be buried in the house with its notorious owner, Emeric Belasco, and the multiple spirits that haunt the mansion’s hallways. Barrett stacks his cards by bringing two mediums along to draw out the ghosts. Florence Tanner (Pamela Franklin) is the spiritual medium whlie Ben Fischer (Roddy McDowell) is the physical medium.

08- Dr. John Markway – The Haunting (1963)
Robert Wise’s The Haunting based on Shirley Jackson’s The Haunting of Hill House, features another scientific approach to paranormal investigation with Dr. John Markway (Richard Johnson) investigates the legends behind Hill House once owned by Hugh Crain. Markway, along with heir to the house Luke Sannerson (Russ Tamblyn), enter the home to conduct his experiments. He brings with him two volunteers: Theodora (Clair Bloom), a psychic; and, Eleanor Lance (Julie Harris), a meek sensitive. Markway is one of the earliest serious takes on a paranormal investigator in film, he believes in the paranormal with enough reservation to keep him from being perceived as insane for 1963.

09- Elise Rainier – Insidious (with Specs, Tuck) (2011)
The Conjuring is not the firm foray into the supernatural for director James Wan, his previous horror hit, Insidious approached the paranormal with the idea of astral projection. The film is full of spirits, ghosts and demons. It also has Elise Rainier (Lyn Shaye) investigating the claims of Josh and Renai Lambert (Patrick Wilson and Rose Byrne) that their home is haunted. After walking through the home and speaking with the Lamberts, she proclaims that is is not the house that it is haunted, but their your boy, Dalton. It is further revealed that this is not the first time Elise Ranier has meet Josh Lambert, the father. She came to his mother’s (Barbara Hershey) aid when he was a child. It seems the two share a special gift of astral projection where the venture unknowingly into a ghostly plane known as “The Futher.” Rainier’s best scene comes during a seance where she dons a gas mask equiped with a microphone hooked up to a head set for her assistants, Specs (Leigh Whannell) and Tuck (Angus Sampson), to record her mumblings.

10- Tangina Barrons – Poltergeist (with Dr. Lesh, Ryan & Marty) (1982)
“This house is clean!” announces Tangina Barrons (Zelda Rubinstein), a gifted spiritual medium, in Tobe Hopper’s Poltergeist after she helps Steven and Diane Freeling (Craig T. Nelson and JoBeth Williams) rescue their daughter from the ghostly dimensions hidden in their home. She is brought to their aid by a team of parapsychologists from UC Irvine, Dr. Lesh (Beatrice Straight), Ryan (Richard Lawson) and Marty (Martin Casella). Together, the medium, the parapsychologists and the Freelings battle the forces that latch onto their young daughter Carol Anne (Heather O’Rourke) after abducting her into the astral plane. But they do not realize that rescuing Carol Anne is simply not enough to rid the house of the evil spirits who return to reclaim their prize. With Barrons and Dr. Lesh already gone, it leaves the Freelings alone to keep their family safe. 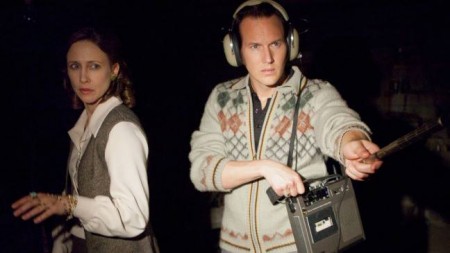 A number of other films could easily have made this list in addition to Venkman and his buds. Vincent Cochet played by Tcheky Karyo from The Gravedancers (2006), a scientist who runs a school specifically to study the paranormal. Jonathan Rivers (Michael Keaton) from White Noise (2005) who investigates the supernatural through electronic voice phenomena (EVP). And Dr. Helzer from Apartment 143 (2012) who leads a parapsychology team who’s sole goal is to help those haunted by forces beyond their understanding. When it comes to dealing with the haunted and the ghosts, spirits and demons doing the haunting, a parapsychologist, a paranormal investigator or a medium of choice is seems is best suited to trump your hand in battling these unknown forces at the doorstep, in the shadows and under the bed.