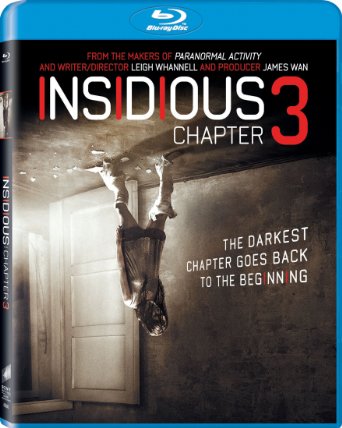 A prequel set before the haunting of the Lambert family that reveals how gifted psychic Elise Rainier reluctantly agrees to use her ability to contact the dead in order to help a teenage girl who has been targeted by a dangerous supernatural entity.

“Sometimes, when you talk to one of the dead – all of them are listening”. That one line pretty much sums up the plot of Insidious: Chapter 3, a far better than expected third entry into the franchise begun by James Wan and Leigh Whannell back in 2010. Whannell wrote/directed this film sans Wan (who has a cameo here), and admittedly I wasn’t expecting too much after the train wreck that Insidious 2 (2013) turned out to be, but Whannell shows a deft touch both in front of and behind the camera in this, his directorial debut.

Quinn Brenner (Stefanie Scott) is a young girl looking to talk to her recently deceased mother, and as the film opens, she shows up at the front door of Elise Rainier (Lin Shaye) – hoping she can help her. Although Elise is reticent to help at first, she takes some pity in Quinn and her plight, so she agrees to perform a quick ritual in which she’ll attempt to contact Quinn’s mom, Lily (Ele Keats). But something goes terribly wrong and Elise can’t make contact with Lily. Quinn then tells Elise that she previously attempted to contact her mother on her own, to no avail. It’s at this point that Elise begins to realize that all is not well with Quinn, and she just might be in grave danger. 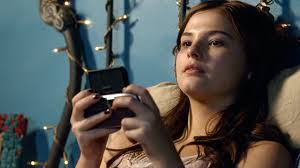 Shortly afterwards, Quinn begins to experience some odd occurrences both outside and in her home. Knocking from the other side of her bedroom wall, loud sounds coming from the empty apartment right above her, and an odd figure that appears to be waving hello to her from the shadows. It’s this odd figure that leads to one of the film’s better scenes when Quinn finds herself distracted by it, and ends up suddenly getting hit by a car. Now immobilized and under the care of her doting dad, Sean (Dermot Mulroney), Quinn finds herself at the mercy of this restless spirit that’s looking to use her to make a comeback of sorts (if you know what I mean). Now fully aware of the dire situation Quinn is in, decides to come out of her self imposed retirement, and help the Brenner family escape from their nightmare. Later in the film, we’re reintroduced to Tucker (Angus Sampson) & Specs (Leigh Whannell), the bumbling paranormal investigators that end up becoming Elise’s partners. 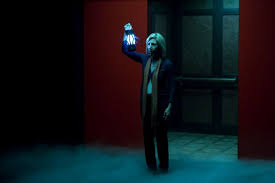 The general consensus is that the 3rd film in a franchise is usually the worst one – especially in the horror genre. Of course this hasn’t stopped Hollywood from going way past 3 installments of any series if they’re still making money. I was dead certain that this film was going to be a turd blossom in full fetid bloom, but it actually has a lot going for it beginning with some excellent performances from the cast. Scott might be familiar to those of you with young children as she was featured in a Disney Channel series called Ant Farm for a few years. While I was familiar with her, I didn’t think she was much of an actress (Disney Channel kidcoms aren’t regarded for the challenge they present to the actors in them), but she’s really good here! She’s totally believable in the role of Quinn, and she adds subtle layers of hurt, pain & despair to the role which really help to make Quinn’s plight relatable to the audience. Mulroney does everything that Sam Rockwell should’ve done in this year’s Poltergeist remake, his earnest pleadings for his daughter’s life feel far more genuine than anything that Rockwell tried to do. He just has the air of a concerned father around him at all times, it doesn’t feel like he’s slumming here, as it does with Rockwell in Poltergeist. As a matter of fact, Poltergeist & Insidious: Chapter 3 have a lot in common storywise. Both of them tell the story of young girls lost to different types of supernatural evil, and the steps their respective families take to ensure their safe return. 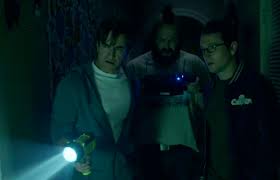 Whannell’s script takes pains to include lots of hints as to where certain aspects of both Insidious 1 & 2 come from (remember, this film is a prequel), and that’s a wise move since it means that those of you who haven’t seen the previous 2 films won’t be lost as to what’s going on with this one. The story is both fresh and familiar at the same time, so it shouldn’t turn off newbies to the franchise, and all of the Insidious veterans (Insidians maybe?) will get a nice buzz from discovering how the characters all come together here. However, none of this would’ve worked without Lin Shaye anchoring the whole shebang. She’s a wonderfully gifted actress, with a veneer of honesty all over her. I don’t think she’s ever given a bad performance in anything she’s appeared in, and she certainly doesn’t here either. In her capable hands, Elise becomes a paranormal super heroine of sorts, protecting those who can’t protect themselves from the forces of evil armed with her bravery and nothing else. The entity that’s harassing the Brenner family doesn’t have a name (the credits refer to him as “The Man Who Can’t Breathe”), but he does have a hell of a creepy vibe! His appearance is haggard & horrid, and he’s given a breathing pattern that sounds a lot like Darth Vader’s as well. And while I can’t fathom why a spirit would need a breathing mask, the look is unique and nightmarish. We also get to see where the Bride In Black from the previous Insidious film comes from, and she makes a terrific appearance here. Whannell manages to fit all of these characters in here without bloating the film in the least. 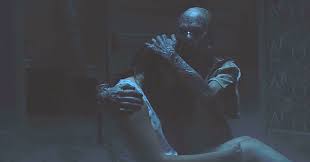 Sadly, despite all of the obvious effort made to make this film stand on its own, all is not perfect. Whannell goes way overboard with a proliferation of jump scares that are all telegraphed way in advance during the first third of the film, and they really weigh the entire enterprise down for awhile. Additionally, the crashing music (by Joseph Bishara) that accompanies each and every one of these jump scares is ridiculously bombastic and over the top. It’s far too obvious a cheap attempt to get a rise out of the audience. But just as those cheap frights stop working, Insidious: Chapter 3 takes a left turn and decides that atmosphere & tension work better than a series of cheap shock scenes. The film becomes a truly eerie and off putting exercise in atmospheric dread, dread that hangs around like a set of nice living room curtains. Whannell also has his camera snake around the film like a cobra readying to strike, he keeps it low to the ground during some of the eerier scenes, and a lot of the time I felt like I was watching a homage of sorts to Kubrick’s camera work in The Shining (1980).

Insidious: Chapter 3 really goes out of its way to entertain, and for the most part – it succeeds. It’s a great audience participation film, the audience I watched it with was yelling and screaming at all the right places, and actually yelling at the screen a few times as well. It balances its frights with its laughs in a measured way, never allowing the goofier moments overshadow the scarier ones. It runs 97 minutes, which is about perfect for this type of film, but I think 10 minutes can be shorn from it with little to no difference in the final product. Despite all of my misgivings, I actually enjoyed the hell out of this film. It doesn’t make up for the massive disappointment known as Insidious 2, but I’ll be damned if it didn’t nearly make me forget that wretched film ever existed.