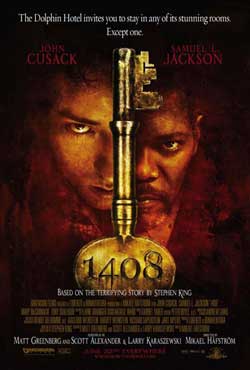 No one can explain the strange goings-on in room 1408 of the Dolphin Hotel. In this thriller based on a Stephen King story, writer and paranormal debunker Mike Enslin (John Cusack) is determined to demystify the ghostly events, even though a hotel clerk (Samuel L. Jackson) begs him to rethink his plans. Mike needs to write another book soon, and room 1408 may be his ticket to the top of the best-seller list. But will he survive even one night?

1408 is a difficult film to just bang out a review for. It’s a film that is enjoyable, but only if you can sort through and filter out various themes and complexities that it shares with other supernatural and haunting movies, and focus instead on the quite effect and imaginative scenes of sheer horror.

The film starts by introducing Mike Enslin (John Cusack), a skeptical, not to mention cynical writer about the occult that makes a living traveling the country and staying overnight in supposedly haunted places. We see him writing fictionalized accounts of the chills and shivers he gets while staying in rooms ghost ridden by the victims of serial killers and family murderers. We quickly understand Mike’s attitude as he pans the room he’s stayed in with various pseudo-scientific ghost attracters. Later in a small book signing a young woman asks him to sign a copy of his first novel and he says that “a different person wrote that book”, obviously a younger and more idealistic person than his present self.

After a scene where a wave takes him out while he is surfing, Mike then gets his mail and finds an anonymous postcard from a place in New York called the Dolphin Hotel which tells him to not go into room 1408. In pursuit of a story, Mike tries getting reservations for room 1408, but to no avail until his agent finds a legal loophole which forces the management to allow him to book the room for a single overnight stay. Before Mike finally does enter the room, the Dolphin’s manager Gerald Olin (Samuel L. Jackson) pleads with him not to enter room 1408, explaining that since 1912 there have been 56 deaths in that room. Mike had researched some of the violent and bizarre deaths that made the newspapers, but numerous others, resulting from natural causes, had also taken place over the years in that very room. The chemistry between John Cusack and Samuel L. Jackson is fantastic in this scene, as Jackson sets up the terror of the room while Cusack cynically and skeptically knocks it down. Incidentally, the acting in the film is uniformly strong, even in bit parts such as a handyman who comes up to fix the thermostat, but refuses to enter the room, even though up to that moment no paranormal phenomena had yet affected Cusack’s repose. The actor really plays it well with a mixture of fear and good comedic timing.

It’s not hard to guess what happens next. Mike stays in the room with no incident for a while until the clock radio spontaneously starts playing “We’ve Only Just Begun” by The Carpenters and then, untouched by human hands, suddenly display “60 minutes” instead of the hour on the digital clock face, a taunt based on Sam Jackson’s declaration that no one stays in the room for more than an hour. When Mike pulls the plug from the wall he suddenly doesn’t have the ability to hear. When he puts his head out the window to hear the street below the window snaps shut and smashes into his hand. At this point Mike wants out and calls the front desk, only to get a woman’s voice talking about the sandwich he ordered. When he puts the key in the door, the key breaks off and is sucked into the hole, then the knob breaks off. Mike is riddled with hallucinations embodying the room’s former doomed inhabitants and the pictures on the wall seemingly come alive.

The movie then starts to reveal all sorts of facts about Mike personal life, most notably the revelations that he had a daughter that recently died, a marriage left devastated by her death, and an estranged father with Alzheimer. The more Mike struggles, the more he tries to escape, the greater the obstacles the room propels forward. The room recreates the most painful moments from Mike’s memory to slowly drive the man insane. Some may interpret the reliving of these moments as the room creating the most intense therapy session a person could ever handle, a therapy so intense it drives most people to commit suicide. The room even goes so far as to recreate a world where he gets back together with his wife and his Alzheimer ridden father speaks to him once more.

1408 is an impressive feat for a PG-13 horror movie (although I saw the unrated director cut), a quality and entertaining movie that does not need to break down into needless violence or gore in order for the fear and suspense to break out. If you don’t get too bogged down with the sentimentality of the scenes with Mike’s dead daughter and father and focus instead on the excellent FX used, this movie really delivers. Finally, I really recommend seeing the director’s cut. The theatrical ending is stupid and apparently provided only because the test audience hated the downbeat ending available in the director’s. The thing about test audiences is none of them are ever horror fans and they tend to mess up movies for those who are.