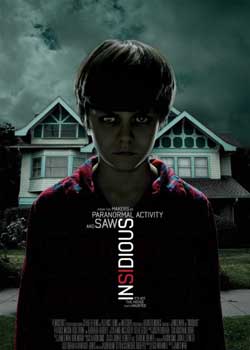 A family looks to prevent evil spirits from trapping their comatose child in a nether realm called The Further.

The definition for the word “Insidious” is basically “Intended to entrap”. And that is exactly what James Wan’s latest offering “Insidious” did to The Black Saint. I found myself entrapped, beguiled & plain flat out spooked throughout this marvelously entertaining film. I think you’ll be as well.

Let’s get one thing out of the way first, “Insidious” is a pastiche of at least three different movies: Some “Paranormal Activity (1 or 2, take your pick), a bit of “Suspiria” & a whole lot of “Poltergeist”. The great thing about it is that it blends all of them all so seamlessly you don’t mind the outright theft of plot elements from all three of the aforementioned films. “Insidious” is the story of the Lambert family, parents Josh & Renai (Patrick Wilson & Rose Byrne) & their children who have just moved into a brand spanking new house. Josh is a teacher & Renai writes music. They have an infant daughter & two sons (Dalton & Foster). All of them seem happy & well adjusted. The standard nuclear family. But there does seem to be something wrong with the house. Things disappear & then reappear in completely different locations for no reason. Strange noises emanate from within the house, shadows go by the windows with no one casting them, etc..etc. Renai is, unfortunately, the recipient of most of these shenanigans since she works at home. When she decides to voice her concerns to Josh about the house, he just poo pooh’s it off as part of moving into a new home. One afternoon, Dalton goes into the attic & in an attempt to reach the pull string to turn on the light, he falls off of the ladder & scrapes his head a bit. No big deal, he’s reprimanded & he promises not to do it again. The next morning, Dalton won’t wake up.

He’s not dead but he’s completely unresponsive & will not open his eyes. The next scene takes place with the words “3 months later” on the screen. Dalton is still in his “Coma” (The doctors don’t really know what to call it, as all of his brain & bodily functions are ok). The day nurse is showing Renai how to insert a feeding tube into Dalton’s nasal cavity. So we know that the poor kid is down for the count but we don’t know why. She leaves the room & Renai notices a bloody handprint on Dalton’s sheets. She also hers growling sounds from the baby monitor that she keeps in the baby’s room & sees a man walking outside of their bedroom window twice & then pacing the same steps INSIDE the room. An extremely annoying house alarm goes off repeatedly, the front door is wide open in the middle of the night even though it’s been locked tight.

All of these occurrences lead Renai to beg her husband to move from the home. And surprisingly, he agrees! I’ve never seen a Haunted House movie where the family decides to leave the home mid movie before. So, problem solved right? Unfortunately no. It seems that whatever was in their first home has followed them to their second home. And now Renai is seeing a young boy running across the room, Tiny Tim is playing on their record player (By the way, who still has a LP player nowadays? Just wondering) for no reason. At this point, Josh’ mom, Lorraine (Barbara Hershey) steps in to help. She has been keeping a secret from Josh for a long time & feels that it’s time for him to know. But before she can tell him, she witnesses a demonic presence directly behind Josh (It looks like a cross between Darth Maul & the Incubus from the 1982 John Cassavetes film of the same name) & it is scary as f*ck. She brings in a friend by the name of Elise Rainier & her assistants, Specs (Writer Leigh Wannell) & Tucker (Angus Simpson). Together, Elise & Lorraine explain the situation to Josh.

It seems that when Josh was a child, he had the power of Astral Projection. He had the ability to leave his body & travel about in spectral form. But only in his sleep. Dalton has that same ability, he always did. He just never spoke of it much because he always thought he was dreaming. Dalton’s spirit has wandered away to a place that Elise calls “The Further”. A nether realm where lost souls dwell. And he can’t find his way out. All of the apparitions are lost souls & (in one case) a demon & all of them are waiting for Dalton to die, so that they can invade his body & live again on Earth. The only way to save Dalton is for his dad to use his long forgotten ability to enter The Further & find Dalton to lead him out & bring him back to his corporeal body. But there are forces within the Further that don’t want young Dalton to leave & they will fight to keep him there.

By now, everybody knows that they’re watching “Poltergeist: The next generation” & “Paranormal Activity 3” all mushed together. But you know what? As this movie chugged along, it didn’t matter that it reminded me so much of those films because it apes them so perfectly. If anything, it’s a testament to the effectiveness of the original “Poltergeist” & “Paranormal Activity”. The audience is always looking around the periphery of the screen to see if something is moving or if something is out of place. The sense of dread grows exponentially as the movie continues. Reaching it’s boiling point during the scene where Elise tries to contact Dalton in the Further via a gas mask that has a long tube leading from her mouth to her assistants headphones so he can hear what she is saying & write down whatever responses she receives. The mechanism looks silly but it makes the scene gripping & terrifying.

“Insidious” is easily the scariest film I’ve seen this year for sure. It hits all of the proper notes a haunted house movie should, it’s scary, suspenseful & believably acted by all. There were moments in the film where the entire audience screamed in unison (not me, of course. I’m The Black Saint! This sh*t don’t scare me…much). Rose Byrne is especially potent in her role of the children’s mother. She runs the gamut from joyous to terrified in seconds during parts of the film. I never thought she was a especially good actress but she’ proved me wrong here. Lin Shaye essays the Zelda Rubenstein part of the film perfectly. She carries herself with an air of authority that is absolute & resolute. She is perfectly cast & ever so believable. Patrick Wilson is a little less believable but no less convincing as the movie continues. And as young Dalton, Ty Simpkins conveys the joys & terrors of childhood in a manner that rang true to my jaded eyes.

Director James Wan (Saw, Death Warrant, Dead Silence) directs Wannell script with a sure & steady hand. He was born to direct films such as these & this is his best so far. He creates a atmosphere of dread & despair from the opening credits on. Excellent cinematography by David Brewer & John Leonetti only make the film that much more evil looking. All technical aspects of the film are excellent. It’s a bulls -eye, plain & simple. It’s worth noting that one of the producers of the film is Oren Peli, the director of “Paranormal Activity”. I wonder how much influence he had on the film itself? Either way, the film is nigh perfect & a must see. I implore all of you to get up out of your seats & head for your local theater to support this movie. It must be seen by all Horror movie fans….NOW.

“Insidious” is this generations “Poltergeist” & I mean that in the most positive manner. If you’re going to make a movie that apes another one so closely, you’re taking a big chance that you could fall on your face. But it’s been a long time since “Poltergeist” graced movie screens & probably hasn’t been seen by many of this generation. Now’s their chance to see what a genuine remake of it might look like & they get some extra scares & laughs in there as well. A great movie!! 4 1/2 shrouds from The Black Saint for “Insidious”. The scariest film I’ve seen so far this year & thankfully…a movie that delivers what it promises for once. Color me impressed…