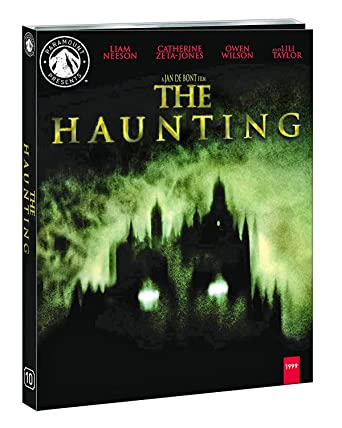 When Eleanor, Theo, and Luke decide to take part in a sleep study at a huge mansion they get more than they bargained for when Dr. Marrow tells them of the house’s ghostly past.

With direction by Jan De Bont, The Haunting, a 1999 Dreamworks big budget ghost story with an equally big budget cast, started off slick, creative and impressive in every way and had the potential to wow audiences. However, after the first hour or so, the well-made aspect was completely lost and the film, including the actors dialogue (solely writer David Self’s fault) seem to lose their way, growing mundane and lackluster, slowing to a ridiculous grind, never regaining momentum all the way to the less than stellar and unbelievably unfulfilling ending. 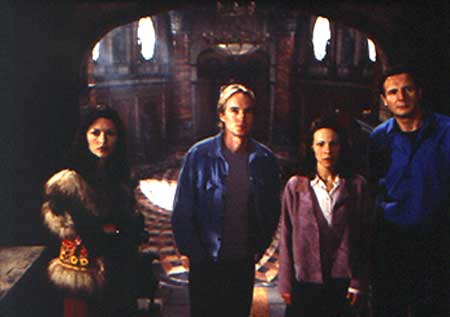 The Crain estate, also known as Hill House, is a massively secluded castle-like structure straight out of medieval times. Reputed to have been built by a well-to-do man whose only desire was to hear children’s voices echoing about it is not all that it seems.

As the film begins with Eleanor, aka Nell, calling in through the heavily gothic looking locked gates and being startled by the quick appearance of Mr. Dudley (Bruce Dern), the ragged and somewhat creepy looking caretaker, its clear that the tone is being set. When Mrs. Dudley (Marian Seldes), eerily explains to Eleanor that prior to darkness, both she nor Mr. Dudley will no longer be on the grounds and that no one will even consider aiding during the night, the premise is completed. 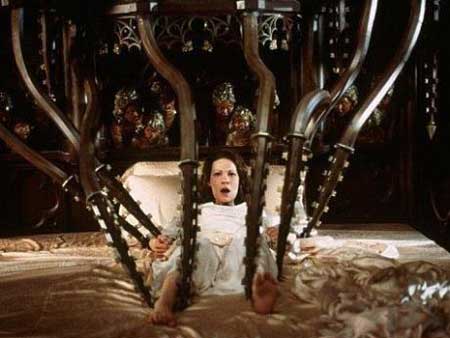 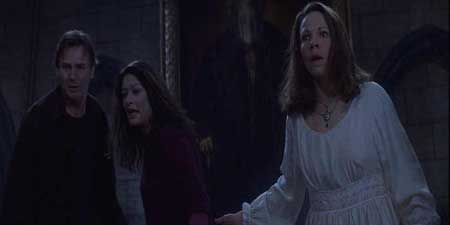 Theo arrives and Eleanor proceeds to giving her a tour of what she has already explored. In one of the most intriguing, effective and elaborate scenes, the two find a room with a slowly spinning dance floor surrounded by mirrors. While the scene heavily implied that it would eventually become part of the master plot, it failed to do so and will probably leave the screener wondering why it was used in the first place. Regardless, it is a sight to behold and certainly eye candy.

The two leave the room and traipse on throughout the home’s various rooms, prancing down a water-filled hall, leaping from book to book set like stones for crossing a stream. Again, the set implies future potential, but doesn’t hold muster, only serving to express the home’s extravagance.

Barreling through a door, they clash into and meet a surprised Luke, who obviously, and rightly so, takes an instant liking to Theo.

Fast foreword to the evening as Dr. Morrow explains the home’s background, a bait and switch ploy, establishing and attempting to install fear. And, while the audience is aware of the doctor’s motives, they are also privy to watching an untouched harpsichord’s tuning peg slowly twisting and tightening the string to the point of snapping, which, when it does, whips across his assistant’s face creating an ugly slice.

For the next 35 or so minutes, the audience is led into a quite good, thought provoking mystery nearly equal to that of an Agatha Christie novel, with Nell making little discoveries along the way. However, the clues are subtle, bordering extreme vagueness and making the enigma very hard to follow. By the time the end of the movie rolls around and the case is finally cracked, the audience will most likely be left scratching their heads, feeling let down, and maybe even glad its over.

Regardless, somewhere along the way Nell has made a connection with the ghost children. As the four attempt to flee the estate, Nell abruptly changes her mind choosing to stay and protect the held captive and unexplained as to why, tortured children. When the remaining three are unable to escape the house’s grasp, Nell suggests they play a game of hide and seek with the evil ghost, something the ghost supposedly enjoys. Huh? What? Hide and Seek? Thus begins the welcomed ending.

Scary this film is not and in a desperate attempt at frightening viewers, CGI special effects are used. While the wood carved children’s faces changing expressions are, in all honesty, quite good and an asset to the film, it is the bed sheet based ghostly facial apparitions and impromptu appearances of the wicked previous home’s owner that tend to be rather cheesy and unconvincing.

The premise and location couldn’t have been more perfect, and had this movie maintained what it began with, this would have been a must DVD for a ghost film connoisseur’s collection. But, after watching it unfold into an absolute train wreck, this viewer is wondering how it managed to draw over 30 million it’s opening weekend and why so many even considered spending the night in Hill House.