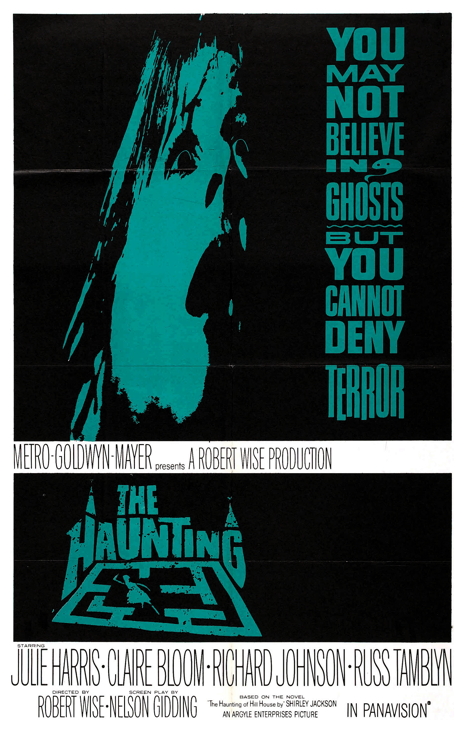 SYNOPSIS:
“Ninety years ago, Hugh Crain builds the mansion Hill House in a remote area of New England. When his wife is moving to the mansion, she has an accident and dies, leaving the bitter Hugh Crain and his daughter Abigail alone in Hill House. Hugh Crain marries again and his wife also dies in Hill House. He moves to England and dies, living Abigail alone. When she is an old and invalid woman, she hires a paid companion from the village, but the woman neglects her and she dies. The companion inherits Hill House but the mansion drives her crazy and she commits suicide. In the present days (1963), Doctor John Markway rents the mansion from the inheritor Mrs. Sanderson to study the supernatural and prove the existence of ghosts. He invites the clairvoyant Theodora (Theo) and the unbalanced and needy psychic Eleanor (Nell) Lance to spend vacation in Hill House, and he goes with the skeptical future inheritor Luke Sanderson to the mansion. During the nights, the quartet witness supernatural manifestation in the house and the sanity of Nell is affected by her ghosts.” (courtesy IMDB)

REVIEW:
Is it truly an old-fashioned desire to return to a simpler time if ‘progress’ has become a by-word for gore, sleaze and the graphic depiction of bloodied entrails proliferating from our cinema screens? It doesn’t take a prude like myself to recognise the madness masquerading under the all-encompassing banner of ‘Horror Movies’. Horror in the movies once meant the satanic majesty of Boris Karloff or the brooding malevolence of Bela Lugosi. It meant the haunting remembrance and lyrical rhapsody of Stella By Starlight heard in Lewis Allen‘s horror masterpiece The Uninvited (1944). After hibernating for two decades while science fiction dominated the genre, supernatural horror returned with a vengeance. Keen intelligence and an educated eye for fantastic symbolism were not, of course, confined to the European New Wave during the sixties. They are very evident in two very interesting English-language films about haunted houses, by no means traditional horror films: The Innocents (1961) and The Haunting (1963). 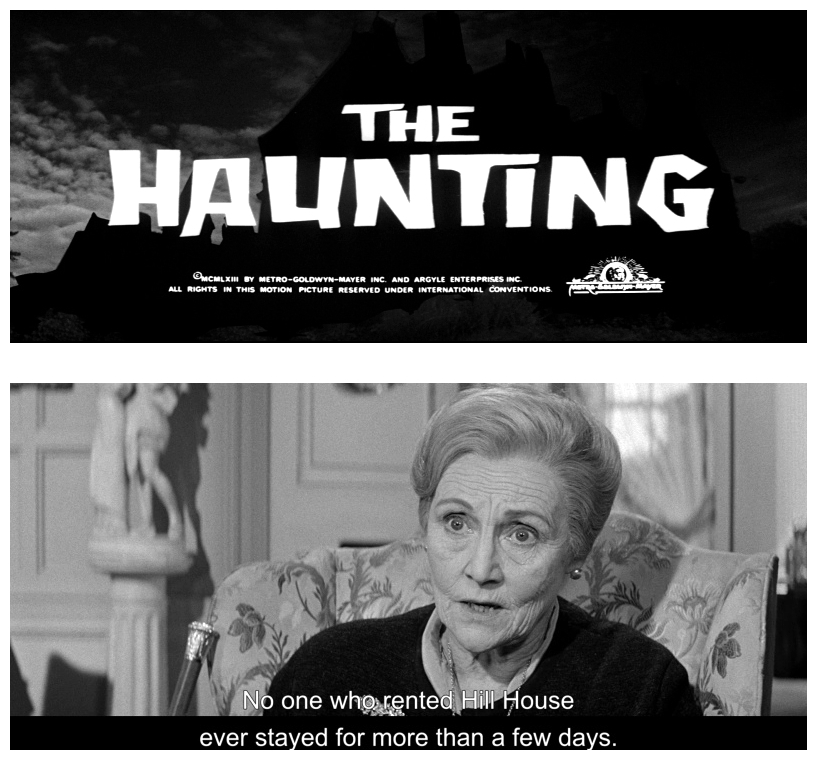 Both, significantly, are adapted from sophisticated and ambiguous originals: The Innocents from Henry James‘ The Turn Of The Screw, and The Haunting from Shirley Jackson‘s The Haunting Of Hill House. both were made by maverick intellectuals, Jack Clayton in the former, and Robert Wise in the latter. Both films are so tactful in revealing their ghosts that it is almost impossible to believe there are none – that we are witnessing the projections of troubled minds – and both rely heavily upon the careful building up of an uneasily electric atmosphere, clouded with enigma. Yet the films are rather different. The Haunting is a less subtle film whose Freudian elements are more up-front, but it has many strong moments, and remains in the minds of many critics and film students as the quintessential horror experience. It was an ideal project for Robert Wise, as it allowed him to return to the psychological horror sub-genre that he helped to create with Val Lewton in the forties. 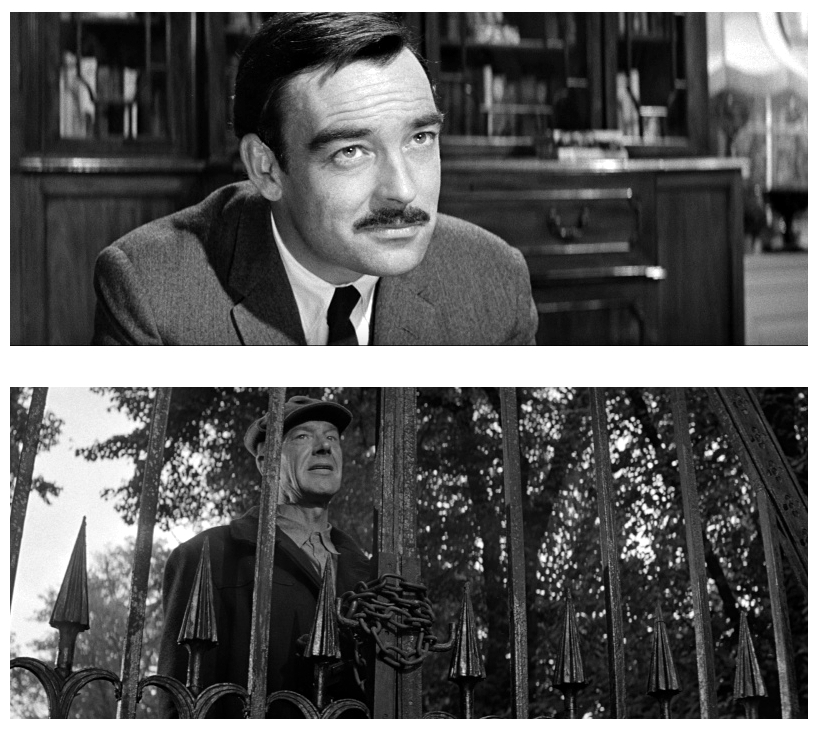 As in his Curse Of The Cat People (1944) and The Body Snatcher (1945), we never actually see anything supernatural, but there are strong indications of its presence. A parapsychologist named Doctor John Markway (Richard Johnson) takes several experienced psychics to Hill House – a house that was born bad, we are told – for a succession of experiments and documentations in order to ascertain the existence of true evil. Skeptical Luke (Russ Tamblyn), the heir to the house, and Markway’s even more skeptical wife Grace (Lois Maxwell) also come to stay in Hill House. What they eventually discover is a presence so enormous and depraved that it defies logic or sanity. The uncanny manifests itself in sounds and intimations rather than outright ghosts. The house may really be haunted, or the manifestations may be poltergeist phenomena springing from the disturbed mind of one of the four investigators: an obsessed anthropologist, a neurotic virgin, a lesbian psychic and the obligatory crude skeptic. 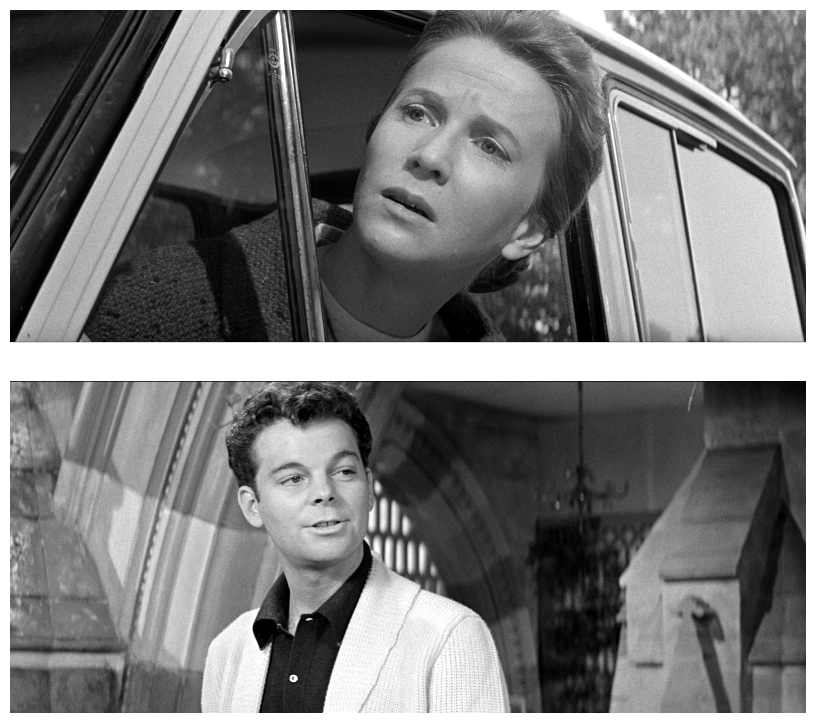 The labyrinthine interior of this twisted old house becomes – as so often in this kind of story – an image of the contortions and mazes of the human mind. Of course, many unusual things happen, all focusing on Eleanor (Julie Harris). It becomes obvious to her and worrisome to the others that the house seems to ‘want’ her and will not let her leave. In a way, this makes her feel important for the first time in her life. Practically a nonentity – she lives in her sister-in-law’s living room, she spent the prime of her life nursing her invalid mother – Eleanor’s only distinction is that her house was once mysteriously bombarded by rocks from the sky, the only such case to be documented. After the violent ‘murder’ of Eleanor by unseen forces, a sombre narration states her terrible eulogy: “Hill House has stood for one hundred years and will probably stand for one hundred more, and we who walk here walk alone.” 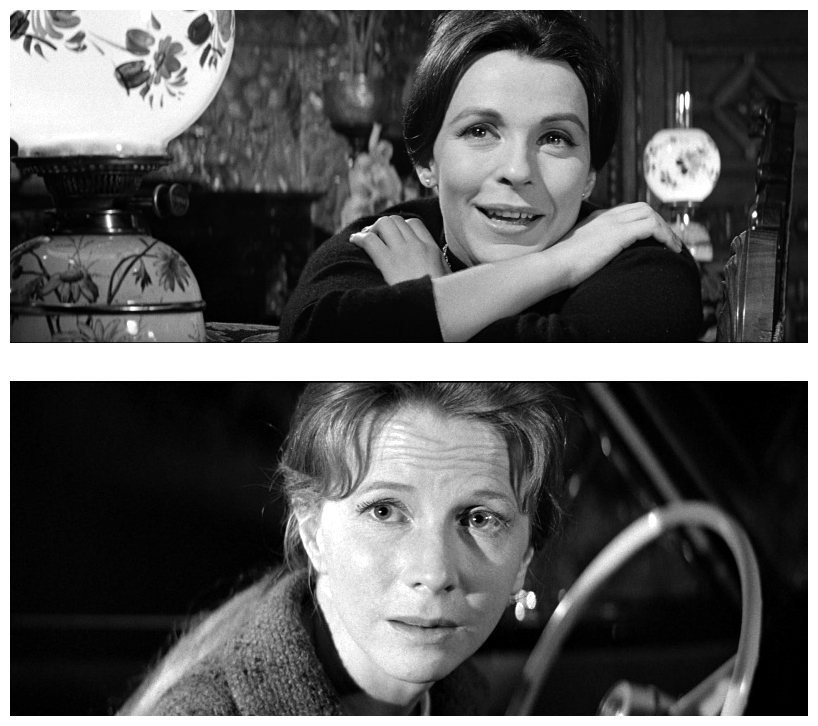 It is for the viewer to decide if there are ghosts haunting Hill House who are determined to make Eleanor their eternal companion, or if Eleanor is subconsciously manifesting all the terrifying sounds, atmospheric changes, etc. in the house. Or is it a little of both? The movie is set in an oddly constructed New England mansion with a history of tragedies resulting in madness and death. The horror of Hill House is the house itself, a living, breathing life-force, a massive succubus enticing the life from mortals foolish enough to enter its doors. And yet, for all of its fully deserved reputation, nothing is ever seen in The Haunting. In many ways treated like a vintage radio show, the terror of this unnerving film lies in the enormous power of its suggestions. There are no apparitions. There is no real violence or blood to be found. We only know that ‘something’ is in the awful house with us. We are not, despite appearances, alone. 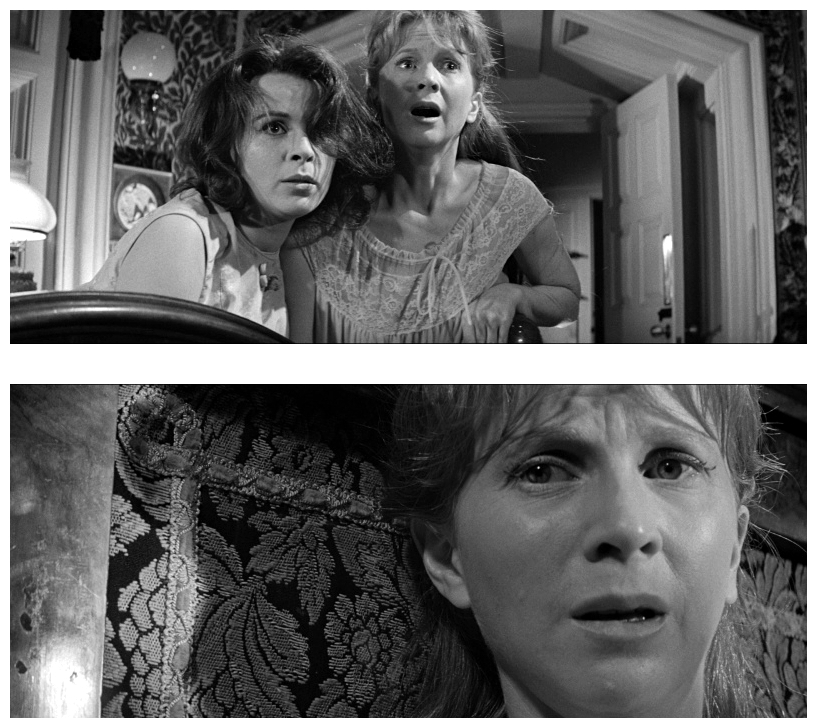 For a ghost story without ghosts, the film is still amazingly spooky (even the opening montage of the history of Hill House is creepy) with many scenes or moments that will either give you chills or make you jump. Take for example the film’s most powerful scene: Eleanor and Theodora (Claire Bloom) are trying to sleep, maintaining an agitated conversation from twin beds. The room is dark and there is a violent pounding begins to assault the walls of the corridor. Terrible scratching rips across the door as though ‘something’ were trying to find a way into the room. Eleanor reaches out into the darkness for a hand to clutch and finds Theodora in the adjoining bed. The pounding and scratching increase in their awesome intensity while Bloom’s fingers seem to tighten over Eleanor’s hand like a vice: “She’s breaking my hand!” 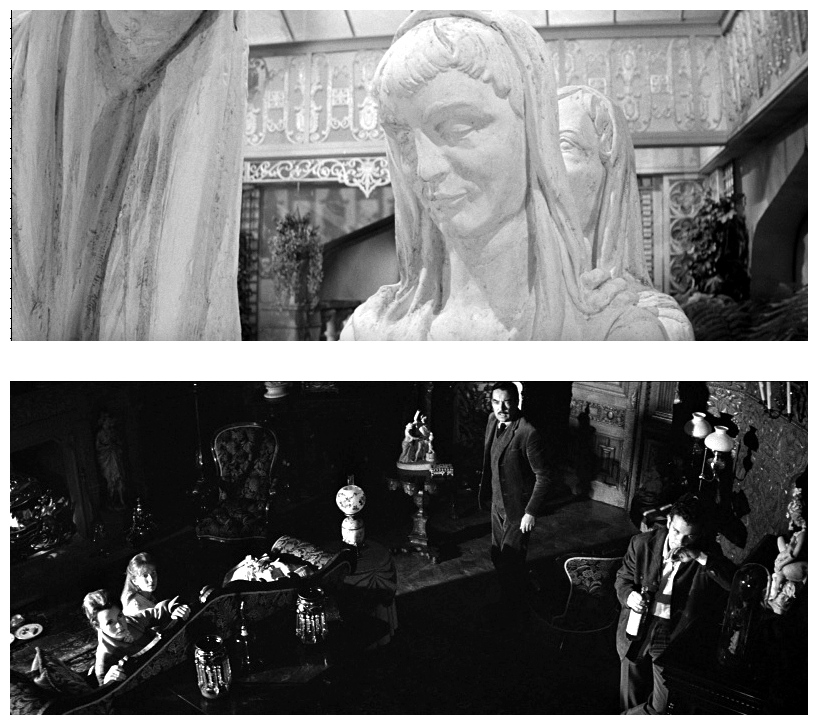 Finally the assault ends and the door opens to reveal the two women at opposite ends of the bedroom. Eleanor’s bed has been moved against the farthest wall. Her arm is outstretched as though she is still holding onto something unseen. Her fist is clenched tightly shut and her eyes widen in amazement: “Whose hand was I holding?” This was a moment of sheer unreasoning horror and yet not a single thing was seen or needed to be seen. This is the difference between subtlety and depravity, between good and bad, between quality and trash. The Haunting (1999) remake starring Liam Neesom, Catherine Zeta-Jones and Owen Wilson was almost universally panned. Legendary horror director Wes Craven initially worked on the project, but even he could see its flaws from the very beginning and abandoned it. Instead it was directed by Jan De Bont (an excellent cinematographer turned mediocre director) and is living proof that modern filmmakers think that only gore and glossy effects can scare audiences. 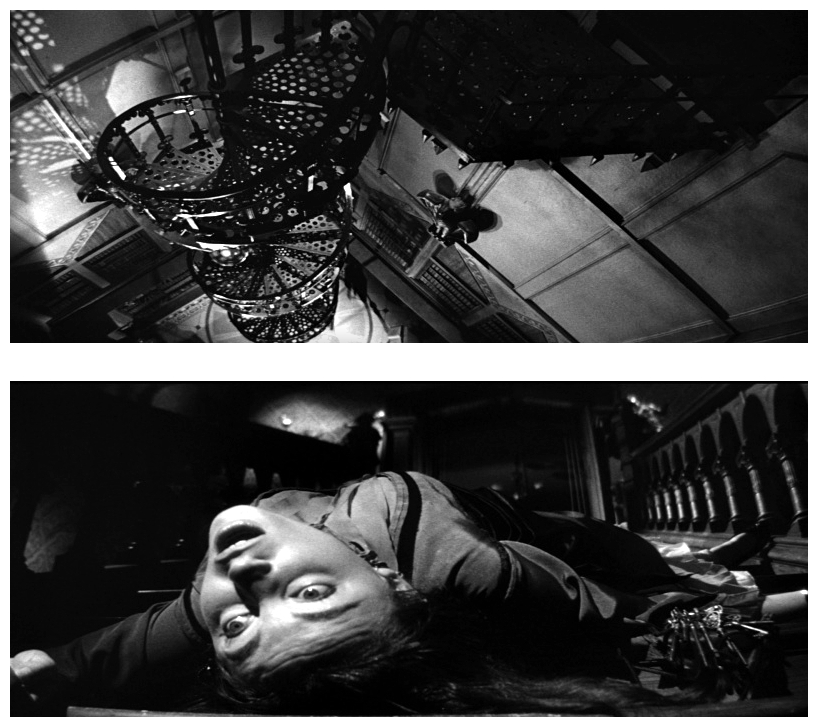 The debate over atmosphere versus gore continues and will continue to rage for years to come. In all the verbal and visual carnage there is an unspoken victim however, lying in the explosive rubble, torn and bleeding profusely. It is the horror film itself, its legend and reputation forever suspect. The genre that gave us Boris Karloff, Bela Lugosi, Lon Chaney, Peter Lorre, Vincent Price, Peter Cushing and Christopher Lee has been rendered virtually unrecognisable. The genre that heralded the proud triumphant road of King Kong (1933) has been muted. The genre that first unwrapped the torn muddy bandages that revealed the face of Frankenstein’s monster and The Mummy (1932) has been buried, perhaps forever. The genre that instilled a magical sense of wonder into the minds and hearts of children everywhere has itself been discarded into the realm of forgotten history. Speaking of which, I’ll be back next week come hell and high water to assault your senses with another so-called classic fetched from the deepest depths of the Los Angeles sewerage system for…Horror News! Toodles! 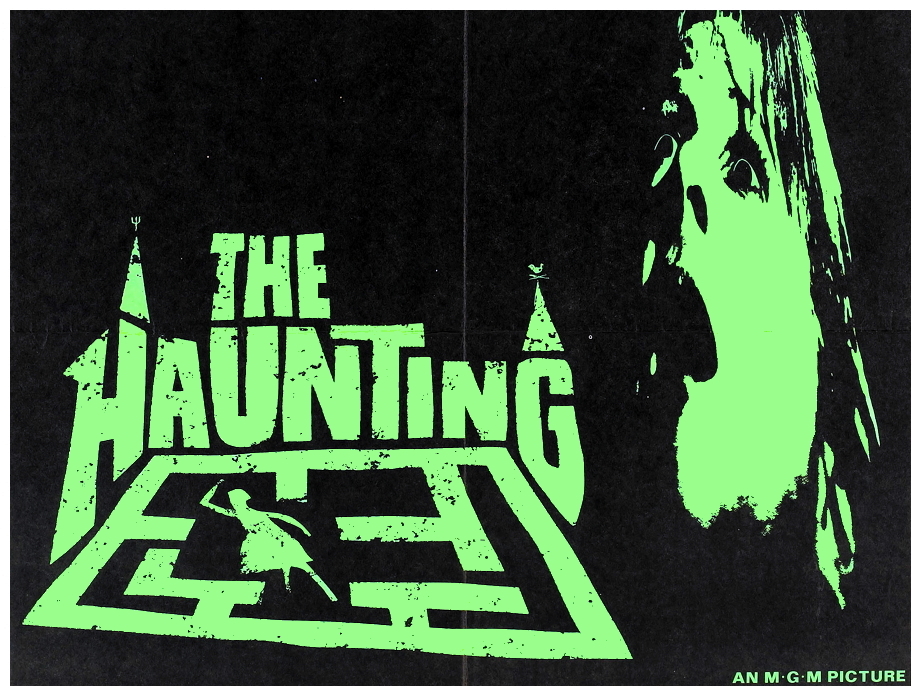