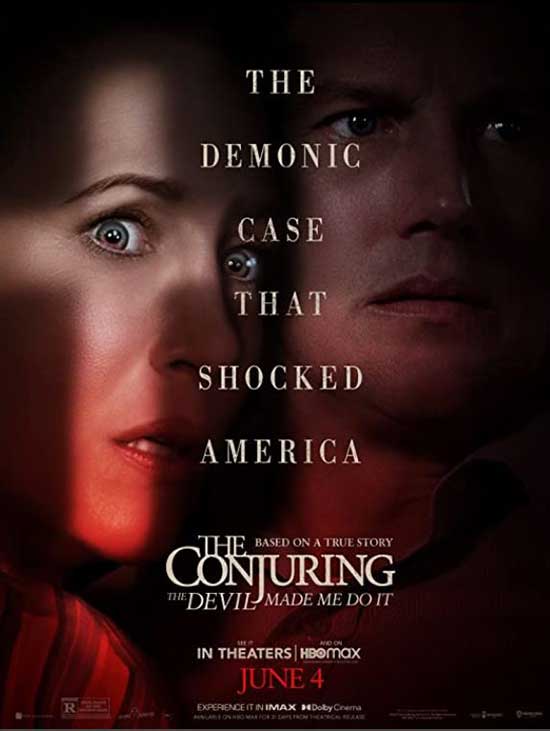 The Warrens investigate a murder that may be linked to a demonic possession.

The Conjuring universe is back on the silver screen with its third chapter in the original series of movies, releasing the Warrens’ real-life cases back onto the world. The first two Conjuring films, in my opinion, slapped the horror community right in the face with James Wan’s directorial vision and established themselves as modern-day horror classics. It was thus interesting to discover if “The Conjuring: The Devil Made Me Do It” would live up to expectations with Michael Chaves as its new director.

When young David Glatzel (Julian Hilliard; Netflix’s “The Haunting of Hill House”) exhibits signs of possession, Ed and Lorraine Warren (the excellent Patrick Wilson and Vera Farmiga) are called for help. With the help of a priest, they attempt an exorcism that spirals out of control. Amidst the chaos and to no one ‘s knowledge but Ed Warren, Arne Johnson (Ruairi O’Connor), the boyfriend of David’s older sister, allows the evil spirit into his own body to release David from its grasp. Afterwards, Ed is taken to the hospital while everyone recuperates from this terrible ordeal. Unfortunately, Arne now becomes the possessed one and murders one of his own friends. The Warrens must now prove to the court the existence of the Devil and that Arne committed the crime under demonic possession. Otherwise, he may be sentenced to death. Through their research, they stumble across much darker horrors than could have been imagined.

The opening scene to this third cinematic vision of the Warrens’ case explodes onscreen with an intense exorcism worthy of a movie finale. The writer-director duo of David Leslie Johnson-McGoldrick and Michael Chaves even succeed at implementing a small homage to 1973’s “The Exorcist” (and later, to 1987’s “A Nightmare on Elm Street 3: Dream Warriors”). Obviously, your expectations are set high right through the first 10 minutes of the film with such an entertaining opening scene.

It has been 5 years since “The Conjuring 2” and it was definitely a pleasure to find our beloved onscreen couple of Patrick Wilson and Vera Farmiga. There’s just something warming, comforting and reassuring when those two are involved in a scene, even though you know something creepy or terrifying awaits. As usual, their performances as Ed and Lorraine Warren are genuine, endearing, and you just can’t help yourself but to root for them. As a matter of fact, nobody seems out of place among the cast as the casting selection by Anne McCarthy and Kellie Roy seems on point. Ruairi O’Connor, interpreting the role of Arne, is my personal discovery from the film. His character just seems like an all-around stand-up guy, just trying to make things right for anyone around him, especially the special connection he has with David. O’Connor rapidly gets us attached to his character as we sympathize with his desire to free David’s soul. He brings forth a brilliant performance, no matter which state his character finds himself in.

The plot itself is quite interesting, managing to integrate details of the Warrens’ love life that we were unaware about within its own storyline. There is, however, somewhat of a lull that seems to stretch on at the mid-way mark of the film, yet seems necessary for some intricately woven storytelling. There is also decent level of creepiness throughout its 112 minutes, yet we don’t have that all-out terrifying touch that James Wan was a master at in the previous two Conjuring movies. Director Michael Chaves, does, however, succeed in placing some humor, just a tad, at appropriate times, without making anything seem cheesy and unnecessary.

Although “The Conjuring: The Devil Made Me Do It” remains the weakest of the three Conjuring movies, it is nonetheless an entertaining film with familiar characters that we have grown to adore. Chaves doesn’t quite possess Wan’s flair for ultimate scares, yet some scenes still remain visually impressive and eerie. You should definitely check it out, especially if you’re a fan of the previous installments in the franchise (yet differ your expectations, as we are not dealing with the same director), as I attribute a mark of 8/10 to it.