When I started this list, I was content to stay with the “top 10 coolest horror movie charaters”. In fact, I “thought” I might even have trouble coming up with the 10 that were unique enough (in their own right). Boy was I wrong! Once I started to consider how many different characters we have had (ranging from serial killers, fantasy conceptions, aliens, beasts, monsters and villains), it quickly transformed into …”damn there are too many to consider for a top 25 list! What about Pumpkin head? What about “The Creature from the Black Lagoon“? What about Frankenfish??? (really???)

So instead of just “coolest” or just “unique” it became….”coolest unique” which I confess is still highly subjective (ya, how bout all those “Men in Black” characters??…bud, don’t forget those!!)

So without further ado, I’m giving you my personal selections for the “Top 25 coolest unique horror movie characters”. And before you dive too deep into the process here, it’s safe to say that many of my choices were more organically unique, sometimes even bearing some similarities themselves. I did keep pretty clear of the fantasy characters (mostly…) such as in (“Hellboy”, “Star Wars”, “Lord of the Rings”, “Dune”, “Clash of the Titans”…and dragons)……. and those multiple variations of bug creatures.

Oh ya, giant monsters can be found here

I did for the record try and stay minimal on the alien origin outer space creatures, mainly because there was SO many to choose from that it could have “been the list entirely (and it would have meant the list was more “science fiction” genre-focused). On that note, the few I’ve chosen are worthy scifi / horror crossovers.

But enough with the chatter, onward into the abyss with our “Top 25 Coolest Unique Horror Movie Characters“. I love em all!

Pyramid Head is just plain bizarre, and you’ve got to love the huge knife thing he swings around. Pyramid Head works on a simple fashion (that you can only wonder what it looks like beneath). “Pyramid Head” is a powerful force that exists in the “Silent Hill” realm, and yet is also somewhat of a servant. An odd correlation between the 2. We love “Silent Hill”, plain and simple (and things with pyramids on their heads) 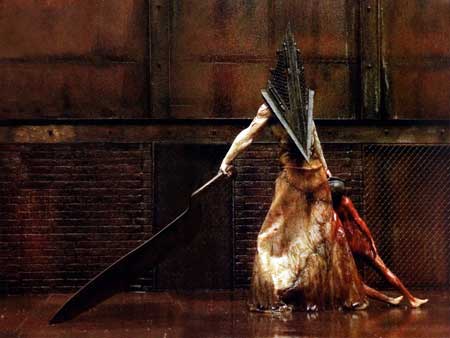 Damn, only 1 film, and not much in the way of appearance. Trickster was a curious entity that probably could have used a few more films to flesh out. He is one character that made this movie more memorable than it should have been. You kind of wonder sometimes if, “Trickster” is waiting on the other end of a game to be played in some other dimension. “Sammi Curr” was bad ass as well, though they slightly reminded me of each other (sort of ???) Sammi Curr, was just cool as an evil Rock god, but “Trickster” had real powers to fear. 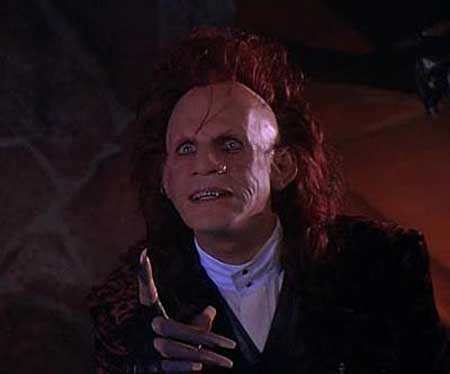 “Lickers” gets the vote, but if you check out some of these “special mentions, you’ll get the sense that they all sort of share a similarity in look and feel…heck you could even throw in a couple of those “Hellraiser” beasts into the mix. “Lickers” are a mainstay for the “Resident Evil” franchise, so they get top billing. “Nemesis” was pretty cool, but more of a bipedal creature than a crawling slimy beast. Crossover likeness can be found in the others mentioned, which probably is more than listed. 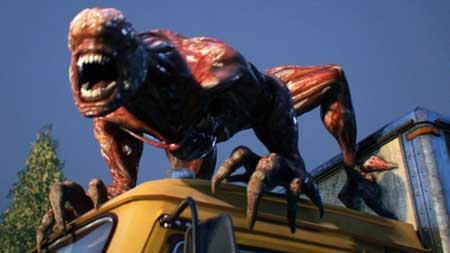 4- “Insidious” – The “Further” Demon
Special mention:
(Darth Maul from “Star Wars”….just cause I had to say it…)

Something about this film (maybe because it was really creepy), has this character especially sticking out as one to name. We saw very little of it (which was assumed to be the “further” demon), but when we did..well, it tends to stick with you (like Linda Blair does). Oh ya, Darth Maul wasn’t that scary, but “Further” demon was, and we are leaving it at that. 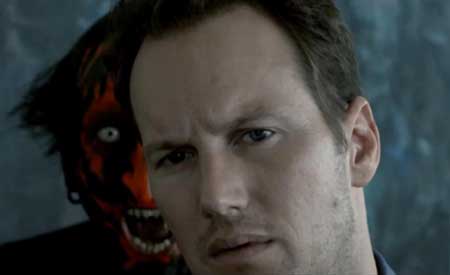 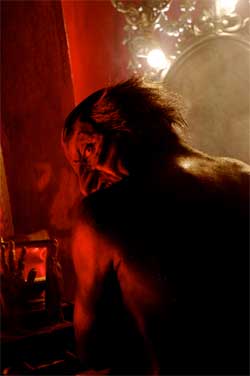 I had to call out at least 1 Rob Zombie character for this list. Dr. Satan gets the vote (despite also being a short lived appearance) Wikipedia lists this character as “Through primitive brain surgery he believed he could create a race of “super-humans” from the mentally ill“. We are told that he lived his life under the Firefly farm to continue his operations….cool, eh!! 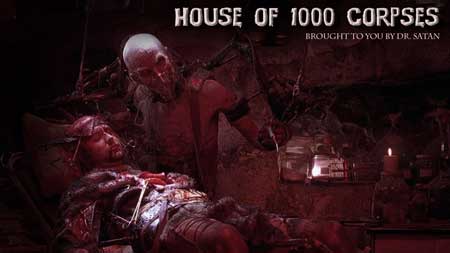 Based on the short story by H. P. Lovecraft, “From Beyond” was one of the stand out Lovecraft films. From this arose the character Dr. Edward Pretorius who morphs into an few organic variations in the film’s last act. The pictures beneath show some of those transformations. Every time I see this film, its those final scenes that are just freaking to behold. You might say that Dr. Edward Pretorius was inspired by “The Thing”, but yet somehow he is more “evil” as less sci-fi. Another film came out called “Society” which reminded me a bit of old Dr. Edward Pretorius. 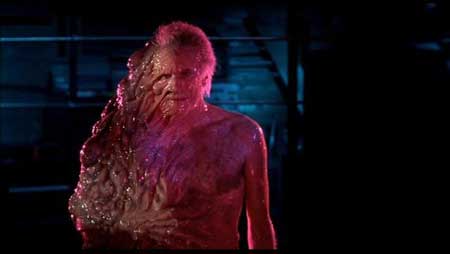 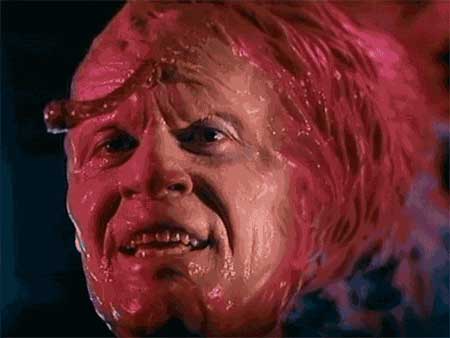 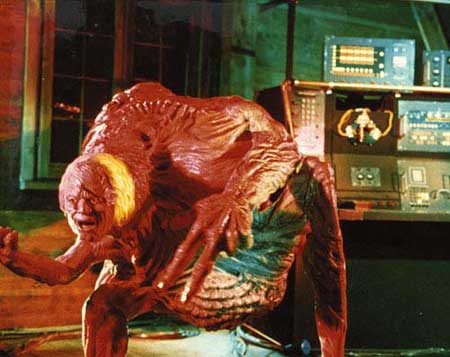 Actually you could call this a “variety of creatures” since it tends to change a bit through-out the movie. I love the organic nature of this “thing” as it turns and transforms into other “things”. Especially when a head or (something) sprouts out. “The Thing” first made itself known (in this form) in 1982, then again in more detail in 2011. “The Thing” simply had to be included in this list, hands down. 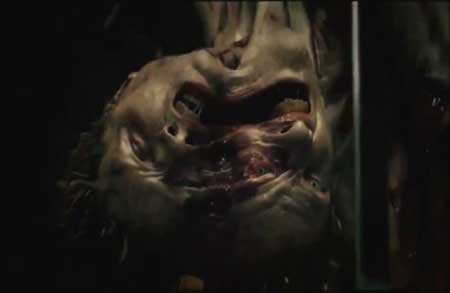 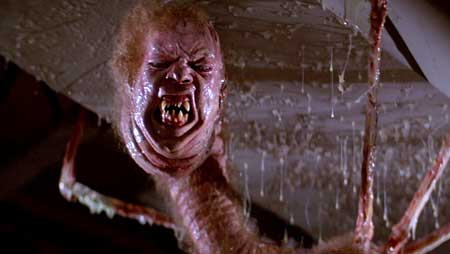 Ya, I know… this is pretty much serial killer stuff, a simple mask, a Jason style face waiting beneath. However the image of this movie (Babyface, that is) sticks with you. I just love the look of this character..its so damn creepy and sinister that it really is its own beast. Why is it that when you combine really cute things with killers that it becomes instantly sinister? 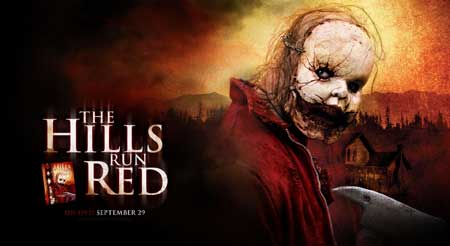 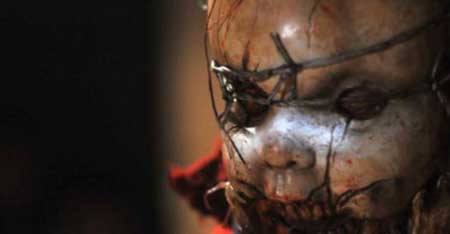 You think we forgot, huh? Nope! The alien creature which was defined and created by the artistry of H.R Giger is one of the most original horror movie designs ever created! Bet you didn’t know those things had a name, did ya? “Xenomorphs”…that’s what you call them. Then again, how many times have you said….”yunno I really love those Xenomorph creatures”. Ya, you might exclude yourself as an elite, or just plain nerdy. We common folks, still call them “Alien” 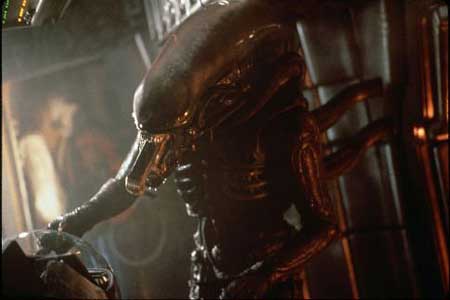 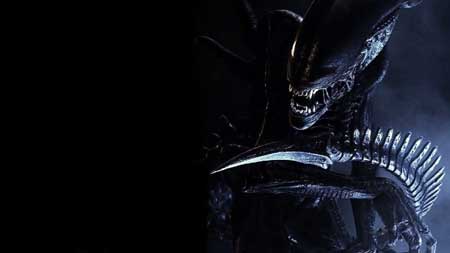 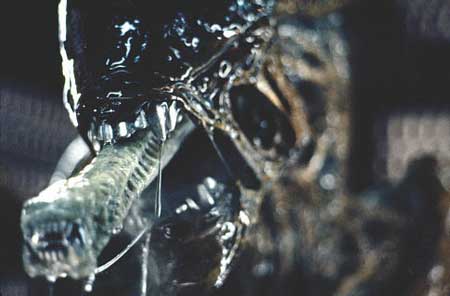 This one is sort of a test for you movie watchers. Now if you haven’t checked out this cool “Scarecrows” film, you need to. Why? because its one of the best. The “Scarecrows demon (no official character name given , we assume may “be” one of the “Fowlers”…um, second thought, I believe it was re-animated “Jack”) towards the last act of the film is damn creepy! I know his appearance is rather abrupt and short, but it’s image has stayed with me since this movie arrived. I had to include him for the reason mentioned, and I think its a damn cool horror character at that! 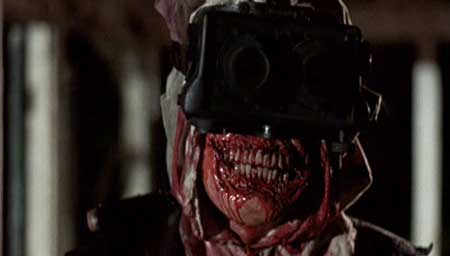 Pinhead, Butterball, Chatterer…shall I go on? These unique leather fetish styled demons were a mainstay for this franchise that grew over time with the emergence of several film-based characters. A personal favorite for me that makes for some pretty cool shelf toys!! There is not much to say here, as any genre fan has encountered these characters over the years. Pinhead is still a favorite, but he does create some interesting sidekicks. 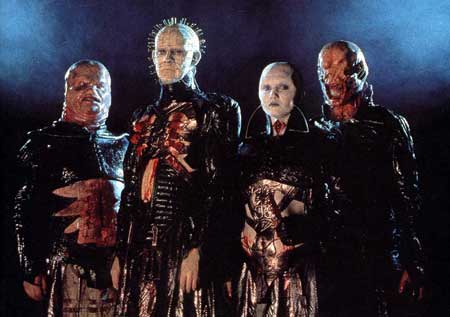 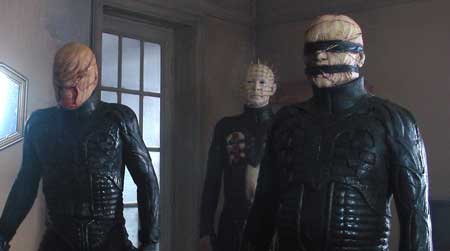 Hey, we have to give “some” props to the Asian market as well. “The Host” fashions on unique CGI sloppy mess of a creature that mirrors many other types in the horror genre (namely as seen like in the recent film “Sector 7 (2011)”). This organic sea monster model has been re-interpreted several times. (“Deep Rising” has a cool one as well). In any case, “The Host” creature was a stand out one worth talking about AND suggesting for you all to see (if not). We’ll just call this one, goopy and aquatic for good measure.