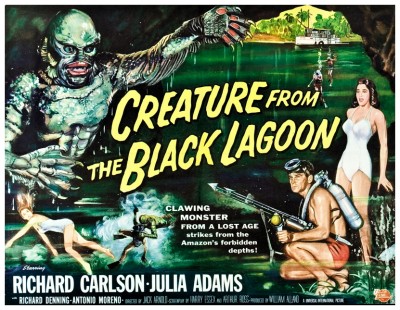 “A scientific expedition searching for fossils along the Amazon River discover a prehistoric Gill-Man in the legendary Black Lagoon. The explorers capture the mysterious creature, but it breaks free. The Gill-Man returns to kidnap the lovely Kay, fiancée of one of the expedition, with whom it has fallen in love.” (courtesy IMDB)

The Thing From Another World (1951) made a lot of money and initiated the fifties boom of monster movies – there had been previous monster movies of course, but not many, the most famous being King Kong (1933). After 1951 there was a strange gap for a couple of years filled in only by a few low-budgeted horrors like Superman And The Mole Men (1951) and The Beast From Twenty Thousand Fathoms (1953), but the dam really burst in 1954. An interesting thing about the monster boom of the fifties is that the monsters were not supernatural. These films insisted that their monsters could really exist in the real world, sometimes as prehistoric survivors in forgotten corners of the globe, but more commonly as mutants created by radioactivity and nuclear weapons. 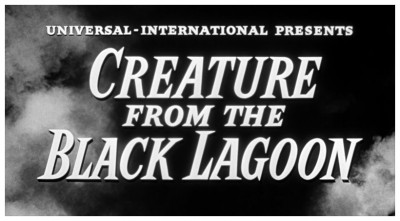 But the first of the 1954 monster movies was an example of the former group. The Creature From The Black Lagoon (1954) was an archaic survivor located in the remote headwaters of the Amazon river. A humanoid creature with gills and, apparently, some intelligence, it is graceful and swift in the water (as played by Ricou Browning), menacing and ungainly on land (as played by Ben Chapman). Although the effect could not have been created more simply – actors in a rubber suit made by Bud Westmore and Jack Kevan – this memorable creature has become one of the most popular monsters in cinematic history. A little overrated perhaps, but it’s still one of the best of the fifties, skillfully directed by Jack Arnold with solid acting, a consistently eerie atmosphere, suspense, and a first-rate monster made up to horrific perfection. 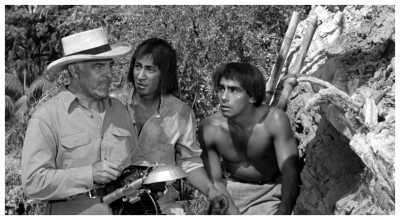 The story involves a team of Amazon explorers (sci-fi stalwarts Richard Carlson, Witt Bissell, Richard Denning and Julie Adams) who discover a gilled man, a missing link in mankind’s evolution. The Gill Man possesses intelligence and manages to thwart attempts to capture him permanently for study, but he turns the tables on his captors by causing deaths and preventing the others from leaving his black lagoon. But, just like King Kong, he meets his downfall because of his lust for a woman and, when he dies, we feel sympathy for him as we did for Kong.

The best scenes by far are underwater, particularly those in which the creature swims below and parallel to the oblivious woman, mimicking the lazy movements of her body in what is almost certainly a mime of sexual intercourse. In most ways the film is quite conventional but these and other underwater sequences, excellently directed by Arnold, lift it out of the ordinary. In fact, Steven Spielberg acknowledged his debt to Creature From The Black Lagoon when he made Jaws (1975). Speaking of this sequence, Arnold later told me, “It plays upon a basic fear that people have about what might be lurking below the surface of any body of water. You know the feeling when you are swimming and something brushes against your legs down below? It scares the hell out of you if you don’t know what it is. It’s the fear of the unknown. I decided to exploit this fear as much as possible in filming Creature From The Black Lagoon but I also wanted to create sympathy for the creature – or ‘my little beastie’ as we called it.”

The film’s original idea was conceived by screenwriter Maurice Zimm and the screenplay was by Harry Essex, who had worked on It Came From Outer Space (1953), and Arthur Ross. The film was shot in 3-D by William E. Snyder, and was so successful that a sequel was shot and released a year later: Revenge Of The Creature (1955). In this the Gill Man is recaptured and exhibited in an ocean park in Florida, where scientists (including a young Clint Eastwood) attempt to teach him to speak. Eventually he breaks out, kills a man, does a lot of lurking, abducts another lady and is eventually shot. Unfortunately, the film does not exploit the pathos in the situation of a natural creature locked up in a glass-and-concrete surroundings (a situation better handled in King Kong) and, although directed by Jack Arnold, the sequel is rather second-rate. Subsequently the second sequel, The Creature Walks Among Us (1956), was not shot in 3-D (the boom was almost over anyway) and is a distinctly minor contribution to the genre. It was directed by John Sherwood whose best monster movie was The Monolith Monsters (1957), but that’s another story for another time.

Creature From The Black Lagoon, of course, puts as much emphasis on the monster’s terrifying appearance as on its humanity and, in this respect, it is a good example of the decade’s most popular film genre, the monster movie or, as it used to be called at the drive-in cinema when I was much younger, the ‘Creature Feature’. There is a point to my reference to drive-in cinemas. To a degree, monster movies were deliberately created as erotic aids. In the United Kingdom, where drive-ins were unknown, it has never really been possible for people to see monster movies as they were meant to be seen: Through the slightly misted windscreen of a car loaded with two or three youthful couples, a flagon of cheap wine and a lot of aphrodisiac gasps as the monsters made their presence felt. Nobody could get the full horrific force of Creature From The Black Lagoon while sitting respectfully in a cinema. You needed to be in a car with a girl (or guy) who wasn’t too sure about you anyway, giving you a speculative glance whenever the monster appeared.

With the success of Creature From The Black Lagoon during the fifties, the revived Universal Horror franchise would gain a new generation of fans. Dracula (1931) , Frankenstein (1931),  The Mummy (1932), The Invisible Man (1933), The Bride Of Frankenstein (1935), The Wolf Man (1941) and others were re-released as double features in many theatres before eventually appearing on syndicated television in 1957. Soon dedicated magazines such as Famous Monsters Of Filmland and, later, websites like HorrorNews.net  would help propel these movies into lasting infamy. Speaking of which, it’s time for me to politely ask you to please join me next week to have your innocence violated beyond description again while I force you to submit to the horrific horrors of…Horror News! Toodles!

Creature From The Black Lagoon (1954) is now available on Blu ray per Universal Studios on the
“Universal Classic Monsters: The Essential Collection”

Creature From The Black Lagoon (1954)