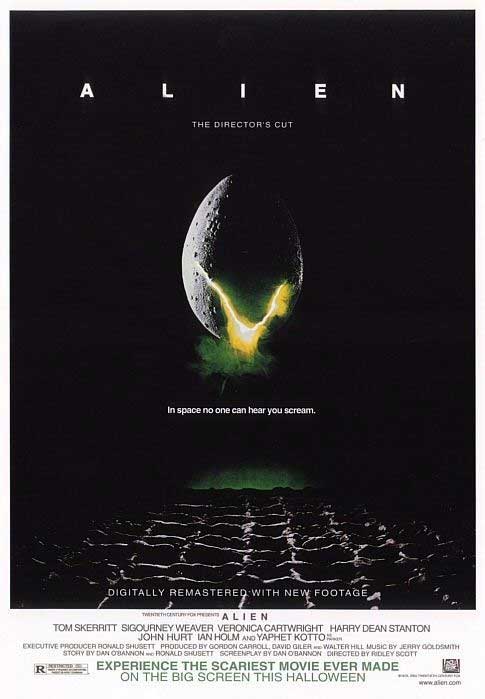 “When a mining ship lands on a planet to investigate upon a suspected SOS, the entire crew are unaware of the terror which they would unleash upon their ship. When a alien life-form attaches itself to the face of a crew member, the rest of the team act fast to try and separate the two organisms. Unbeknown to everyone, this is the start of the terror which would effect every member of the seven-person crew.” (courtesy IMDB)

In 1979 a new kind of horror movie hit the screens. The marketing campaign practically dared you to watch the film, warning that “In Space No One Can Hear You Scream.” Alien (1979) helped to make an ex-BBC television designer a household name and a hot property in Hollywood, launched the career of Sigourney Weaver, and changed the perceptions and expectations of science fiction and horror films. Aside from its many imitators it also spawned five sequels (so far) and one helluva legacy. 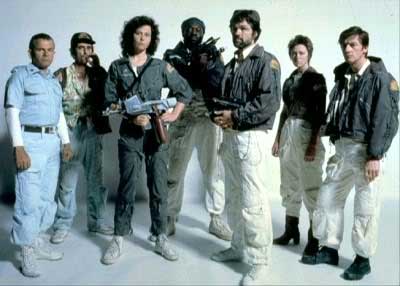 For newbies to the Alien mythos, this is the story of a group of seven ‘space truckers’ contracted to ship mined gasses from deep space back home to Earth. They’re awakened from cryo-sleep by the ship’s computer to investigate a deep space beacon. The Nostromo’s crew find that they’ve been awakened in a solar system a long way from Earth and that their journey is far from over. After a rather unique method of getting on board the ship, our eighth passenger, the nightmarish bipedal Alien of the title (with more ways to kill you than a cigarette) begins to pick off each crew member one-by-one like a pyramid-schemer at a dinner party. 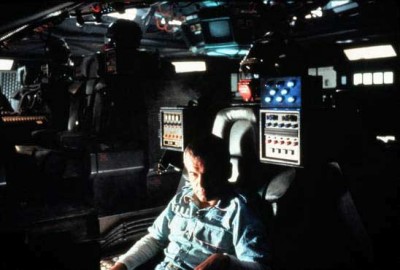 What follows is the ultimate haunted house movie as our intrepid crew find various solutions to their predicament and fail at each one all the while facing new and brilliant plot points that bring us to our surprising finale. It’s not a glamorous portrayal of space travel, by the way. Instead we’re given a gritty and utilitarian ship filled with an irritable crew who smoke and swear like Ian McShane at a midnight poker game. The camera work evokes an almost documentary feel, as if we were watching a real group of people unaware they were even being filmed. The emotions and the shocks are realistic and believable and the characters are endearing because of the fact that they feel so real, not like an actor’s interpretation of something written. 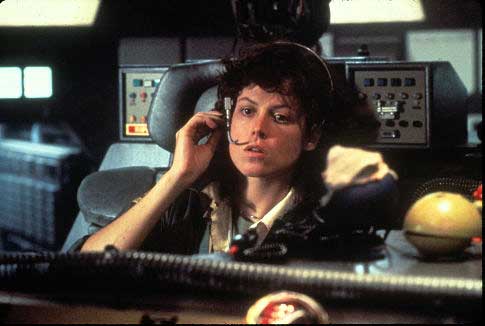 At the time, the cast were a bunch of relatively unknown character actors, but the chemistry is superb, disturbing and believable, enhancing the absolutely real horror that awaits each one of them. There are no superheroes here, as they were in no way prepared for what awaited them. They are scared, rightfully so, and no one projects this better than Veronica Cartwright as Lambert, the no-nonsense worker-bee turned scream queen when business doesn’t really go as usual. The very embodiment of a hysterical, sobbing woman scared out of her wits, and for good reason. 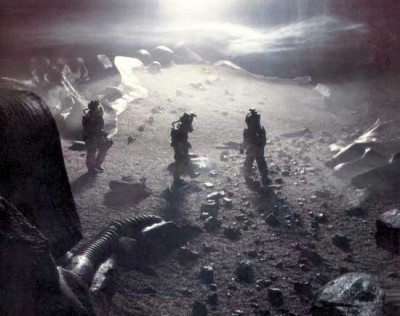 Tom Skerritt is Captain Dallas, the obvious action hero until the unthinkable happens. The always watchable Harry Dean Stanton‘s Brett and the incomparable Yaphet Kotto‘s Parker are the lowly technicians demanding their share in the pay. Their proficiency with technology makes them indispensable, so what’s going to happen when they end-up on the menu? John Hurt gives us Kane, the workaholic explorer who volunteers for the extracurricular mission and gives our curiosity-killed cat a disturbing run for its money. Ian Holm‘s Ash is a serious and menacing wild card with secrets of his own. 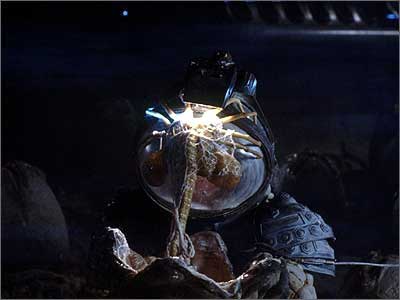 But it’s Sigourney Weaver‘s Ripley who steals the show here. She goes from being the by-the-book orderly warrant officer to the unlikeliest action hero, especially surprising to see in the seventies. Her acting outshines the best in spite of the fact that at that time she was a newcomer. There are a few scenes seen here worth gold as she ranges from a fear-numbed mind to moments of clear brilliance. 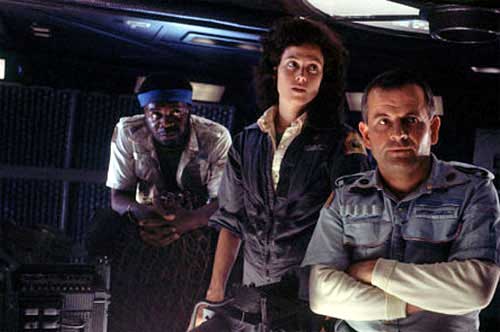 Dan O’Bannon‘s screenplay features some of the most original (and oft-imitated) concepts in science fiction or horror ever seen. Wisely he saves some of the biggest surprises for the later parts of the film carrying the viewer forward in alternating waves of comfort and discomfort. I had the opportunity to discuss the origins of Alien with Dan himself on the set of Return Of The Living Dead (1985). Most fans assume he borrowed ideas from a film subtly titled It! The Terror From Beyond Space (1958) and the Italian Planet Of The Vampires (1965), but much of Alien can really be seen in Dan’s earlier comedy Dark Star (1974): Characters known only by their surnames stalking the bowels of the ship for a dangerous alien. But do you want to know the real primordial soup from which Alien grew? A.E. Van Vogt’s Voyage Of The Space Beagle, a series of stories set on an exploration ship, features a tale called Black Destroyer, on which the original It! The Terror From Beyond Space was based. Did I say based? I meant ripped-off. 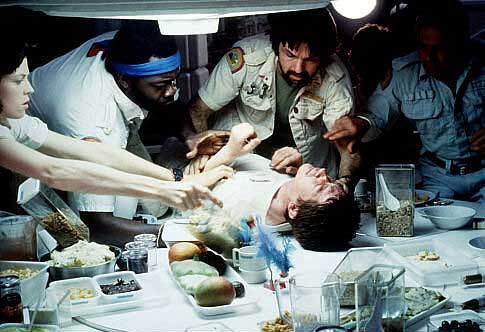 It’s Ridley Scott‘s direction, however, that moves this film from ‘Good’ to ‘Incredible’. Apparently, my old friend Roger Corman wanted to helm this picture, but Twentieth Century Fox bought the rights, preventing that particular travesty. It’s hard to imagine a better film being made by any other director. Scott has gone on record stating that he’s perfectly happy with the original cut of Alien and that he doesn’t consider the so-called Director’s Cut to be superior or more complete than the first incarnation. However, it’s his movie, and there were a few things that Scott could include in a newly restored version. And he did! Cut scenes (most notably the cocoon scenes featuring the miserably suffering Dallas) have been edited into the old film while some of the less action packed moments are edited down for a tighter and cleaned up (but not necessarily better) whole. For the most part, though, this is the same film with all the same great acting and writing, not to mention directing excellence that made the original so, well, original! The hands-on effort and imagination of Ridley Scott is stunning, even in this day and age of special effects and CGI. I believe Alien is Ridley Scott’s best work ever, but Blade Runner (1982) is a close second. Yes, he may have directed Hannibal (2001) as well, but instead I just try to remember all the wonderful work he and his brother Tony have sponsored over the last two decades. 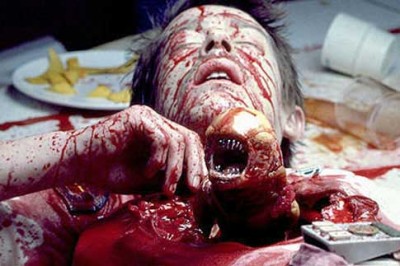 The designs of H.R. Giger are wildly original, horrifically breathtaking and the editing by Terry Rawlings is crisp, making for a perfect storm of a horror flick. No one who has seen Alien will ever forget the last-supper scene, one of the most dramatic ever to be presented to an unwary viewer. Even the actors were unaware of what was coming, maximising the effect. The organic-looking set design similarly promotes nausea and fascination at the same time. Some of the ability to do so much with so little paid off incredibly here, inspiring many amateurs to make their own film. Most beautiful of all (in a disturbing way) is Giger’s sculpture of the Space Jockey, a skeleton of a deceased pilot found near the Alien eggs. Not only is the artwork astounding and sickly realistic, but from a plot standpoint it’s a chilling harbinger of the future. 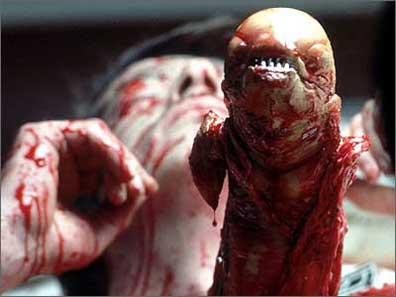 From the terrifying sets to the even more terrifying Alien, with a very sinister elongated head replete with rows of gnashing teeth, the viewer becomes uneasy time and time again. The movie literally oozes with organic evil as the filmmakers put on a virtual lecture of how to scare an audience properly! Ridley Scott shows you just enough to make your imagination and senses run wild as the viewer briefly glimpses the terror of all terrors. 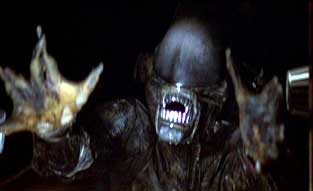 Movie bad guys will never get any badder than the Alien. I know, it’s dangerous to project an absolute about anything, but as far as I am concerned, everyone else can just flush their so-called monsters or bad-asses down the toilet. I’m sorry, there just can’t be anything in reality or the human imagination that can top this creature that we barely get to see during most of this classic. The metaphorically rich design of this snarling, biting, chomping, eviscerating, head-banging nightmare can never be duplicated or topped. If you think the Predator had a bad attitude, you will not believe the unchartable hostility that the Alien carries around as second nature. The Predator (1987), as tough as he was, is about as scary as Dame Edna Everage when compared to this bad boy. Ash said it best: “It’s structural perfection is only matched by its hostility, a perfect organism unclouded by conscience, remorse, or delusions of morality.” Did I mention it has acid for blood? 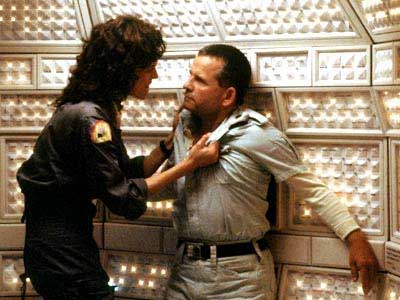 The Giger-designed nightmare evokes all the creepiest imagery ever seen on a villain. Sex, death, insects (and those are the more comfortable thoughts that spring to mind). Bolaji Badejo and Eddie Powell both give us an Alien best unseen to be scary as hell, but when seen you know your fear was justified. From the dildo-shaped head based on the human skull to its oddly familiar bone structure to its duel-jaws, it would take a creepy guy like Giger to build such a thing. 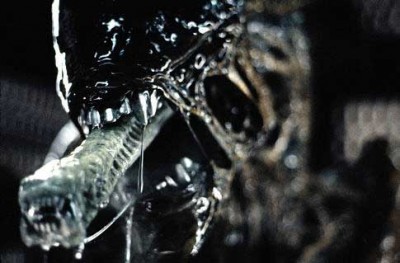 Finally, at no point will you feel like you’re watching a thirty-year-old film. Only Mother’s computer console looks dated, and that’s an intentional homage to earlier science fiction film designs. Jerry Goldsmith‘s oppressive soundtrack is absolutely ideal, and try to resist the urge to freeze-frame Ripley’s camel-toe when she’s semi-naked in the escape pod, okay? But to me, it just didn’t seem right for Ripley to get the best of this Alien from Hell. My preferred ending is for the Alien to fall madly in love with Ripley, have an amorous adventure that she will not survive, and to direct the craft to London, where he again falls madly in love with Margaret Thatcher. Speaking of which, I can’t tell you how surprised I was to discover the sequel, Aliens (1986), is as good an Action film as Alien is a Horror film, but that’s another review, another time, another place. Till then, toodles!