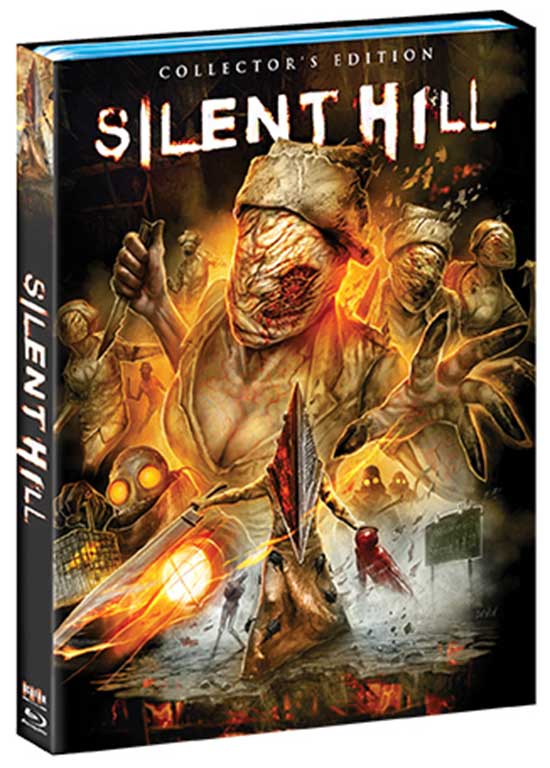 After the continuous sleep walking episodes of Sharon, the young daughter of Rose Da Silva, the decision is made to take Sharon to the place only mentioned in her restless dreams- Silent Hill. However, the road to Silent Hill is anything but easy to access, and Rose creates a high speed chase between herself and a police officer only to end in a crash for them both. When she wakes up, Sharon has disappeared and Rose is at the entrance to the deserted, dream-like town of Silent Hill. As Rose begins the search for her daughter, she does not realize the terror and mystery surrounding her. Rose is led on a blind search for her beloved daughter, finding herself getting more and more entwined into disturbing past of Silent Hil

Now here is the thing. There are some pretty passionate game players out there who have followed the Silent Hill game franchise for quite some time. I think it’s fair to say that alot of them are not happy about this film. However, for the purpose of this review, I am approaching the film just as it is….a film. No preconceptions, no pre-history and no assumptions. And I’ve never played the game, and probably wont because simply I’m not a gamer. 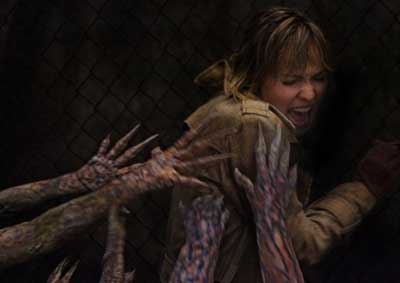 Based on that Silent Hill was a “new” experience for me. More importantly for that matter it was one I fully enjoyed front to back with a few expectations along the way which I’ll talk about as well.

Silent Hill, to new viewers into the franchise, is a world within its own. We find very quickly that there are specifics that teeter on horrific and fantastical that are far removed from reality. From within this reality exists alot of bizarre …to say the least… creatures and entities that range form vicious to grotesque to powerful. In that sense you can compare its e reality to a “like” dungeons and dragons concept on a more cinematic and trippy level. In the same sense that we became custom tot he terms Wookies, Storm troopers and sand people in the Star Wars epic, silent Hill has its own set of oddities and grotesqueries. Though in the spirit of the horror genre, these things are closer to cretins which have spawned out of the bowels of hell  than just a flavorful character that Lucas had a dream about. And with the film we get alot of that. Alot of confrontations with new weird things crawling around. This to me is where this film really excels. Combined with creepy visual FX both practical and digital, the film brings us more than one WTF moments. 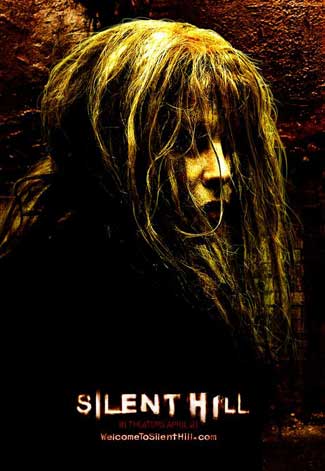 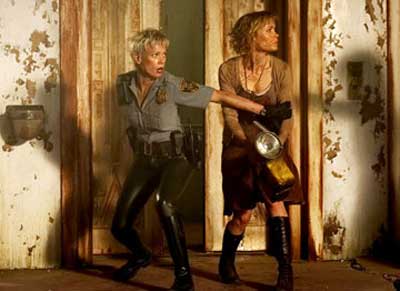 Slightly getting away from the story, the behind the scenes inclusions are some of the best I’ve seen. Maybe because I enjoyed the process the team presented in characters building, dance choreography and contortionist movement training that went into the realism of Silent Hill world beings. Once I saw this, it easily evident that my reaction was..wow those really weren’t all cgi, they were just  well trained actors who knew how to move there bodies in believably weird ways. That right there alone is a big coolness factor for me.

Silent Hill is town that keeps appearing in the dreams of Rose’s (Radha Mitchell ) daughter Sharon (Jodelle Ferland). Though when Sharon begins to sleep walk because of it, her mother decides to face the now barren ghost town head on. A road trip leads to police chase that takes Sharon and her daughter into the world of Silent hill. Though when they arrive and awake from a spin out, Silent Hill is much more closer to a nightmarish reality than it is to small deserted town. It is in this awakening that Sharon finds her daughter has run off and that she must now seek her out in a gray ash covered abandoned leftover of a place that one was.

Though she hasn’t seen the worst of it, as the town transforms before her very eyes to the sound of a loud emergency bull horn. when horn sounds off, the forces of darkness come alive in all kinds of weird shapes and entities. The hell inspired residents range from wormlike abominations, tortured souls, disfigured nurses, self populating insects and one mammoth threatening oddity named pyramid head. Meanwhile her husband Christopher (Sean Bean ) searches for them both in what is assumed to be the true reality distant from the darker reality that they have entered. The policewoman Cybil Bennett  (Laurie Holden )in pursuit is also on hand as she teams up with Sharon in her quest. As we are told, the town was abandoned after a coal fire 30 years back. The constant burning turned the once quaint town into a location of constant ash filled skies and evacuated residents. It provides a surreal feel and look to the distressed area that hold a much darker past involving witch burnings. 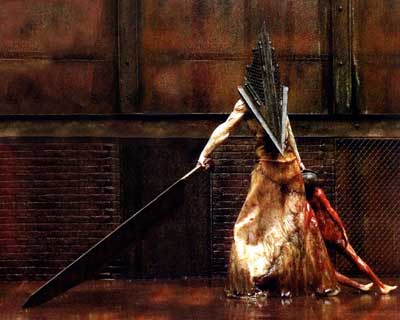 We later find that Sharon is an almost exact likeness of local Alessa whose badly burned body has somehow found the ability to walk about in her child form and in doing so bringing the darkness with her.

As the film progresses, we start to also make connection to the tortured creatures and there roles in Alessa’s past. Strangely the mother, policewoman and daughter are all caught in this daily routine that town has been cursed with.

The film was promoted with some highly proactive artwork featuring the different abominations that reside within. The film itself is adapted from the game series of the same name and focuses on a religious take combined with horror, fantasy and strong emotional content. 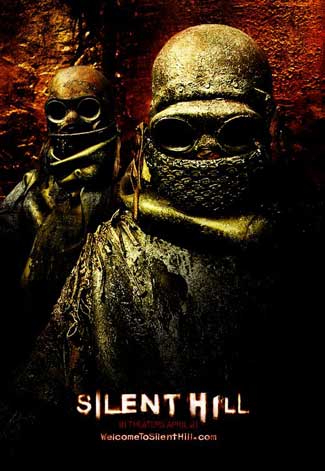 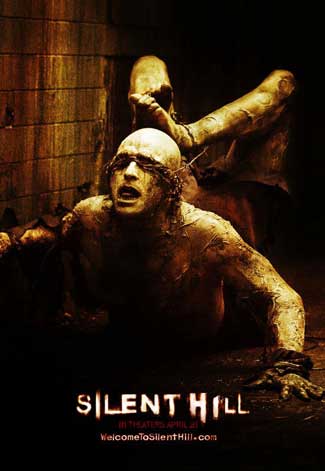 While there is no denying the great visuals and cgi work for that matter, silent hill has its flaws which seem to have been a prime target for unsatisfied viewers. My own interpretation is that alot of history and assumptions are thrown at us, that might require a viewing or 2 to back track a  bit. However, its all really presented in a highly original way that is unlike other films in its genre. 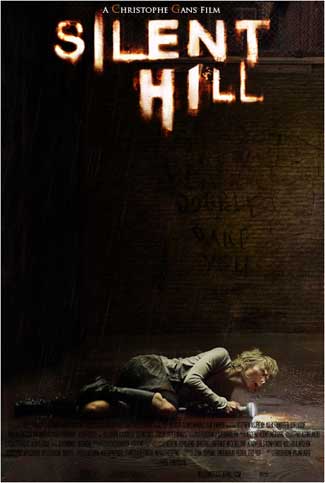 My biggest disappointment at the end of the day was a ambiguous ending that should have been left on the cutting room floor. It’s not really giving much away to say that a better ending would have sat better as a simple exit of the town and left at that. While upon closer inspection the theatrical ending did make sense in the scheme of the whole ordeal is really ended on a fizzle rather than what could have been a bang to resolve things in a better way.

Silent Hill is very much a game feeling film that is also suggestive of Lovecraftian overtones. I highly recommend it and have seen it several times since its debut.