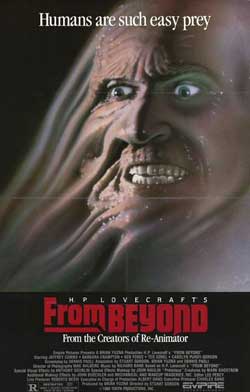 After inventing a way for creatures from the fourth dimension to come into his own world, Dr. Edward Pretorious (Ted Sorel) suffers a gruesome decapitation at the hands of those he brought “from beyond.” But authorities suspect his assistant (Jeffrey Combs) is to blame. Barbara Crampton co-stars as a beautiful psychiatrist brought in to help police solve the case in this classic 1980s thriller based on a short story by H.P. Lovecraft.

Here comes Stuart Gordon and Dennis Paoli again, wait there’s Brian Yuzna. This seems awful familiar, wait there’s Jeffrey Combs and Barbara Crampton, is this Re Animator or one of its sequels? Yes the names are all familiar, but this isn’t Re Animator, this is its follow up From Beyond. 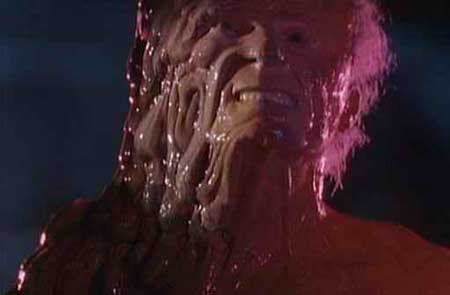 From Beyond once again treads on familiar territory for all of the names I mentioned above, it’s another adaption of an H.P. Lovecraft story. If you have seen any of Gordon’s adaptations you already know to expect a visually, and somewhat sexual experience. Those new however to the experience, let me introduce you.

The cover art for From Beyond always stuck out to me when I was younger. It seemed to be in every video store we ever went to. I don’t remember ever seeing advertisements for it on television, yet that image of Dr. Pretorius always stayed with me. Thanks to a non attentive baby sitter I had seen it, so I often pointed at the box with pride when my friends were there with me. From Beyond was the first of many movies that throughout my life, I would introduce to people with a sick smile on my face. 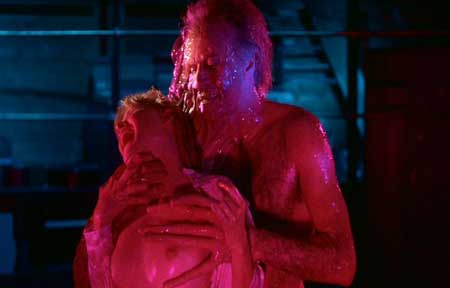 The story begins in what appears to be a very expensive and very 1980’s lab. The walls are lined with allot of controls, and in the center of the room stands The Resonator, it’s a giant machine with some equally big tuning forks on the top of it. Crawford Tillinghast is turning on the machine which lights up and hums, in true Gordon fashion. As the humming increases suddenly some creatures appear around one of the tuning forks. These creatures look like jellyfish and eels just swimming around in the air, that is until one of the eels notices Crawford and attacks him. Crawford quickly flips the switch and just like that everything is back to normal, no more creatures.
Crawford immediately runs to tell his boss Dr. Pretorius about the successful experiment. At first Dr. Pretorius is skeptical that the experiment actually worked, but he joins him in the room with The Resonator. The Resonator of course starts running and Crawford suddenly looks like he has one hell of a headache, Dr. Pretorius however looks like he is aroused. Crawford suddenly realizes that the machine is running itself, and something is coming from the sixth dimension, and it really wants to see them. 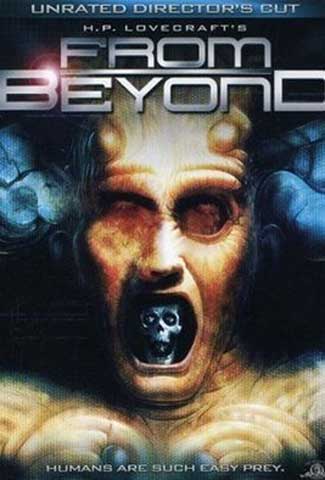 A woman living next door, who is obviously tired of all of the lights and sounds coming from next door, decides to call the police. She informs them that she is disturbed, and she has actually called several times about the disturbance next door. After getting off of the phone she decides to go next door and do some snooping of her own.

Soon after entering the house the neighbor’s dog gets away from her and runs off. She reluctantly chases after it, when suddenly an axe blade slams through a door next to her. Crawford storms out of the room, which causes the woman to turn and run. Crawford however has seen something far more frightening than the old woman has; he practically knocks her down (in one of the funniest scenes in the film) as he passes her on the staircase. Upon getting outside Crawford is immediately apprehended by the police, and the neighbor woman wonders just where her dog went. Don’t worry about the dog though animal lovers; he’s inside, licking the headless body of Dr. Pretorius. (All of this before the credits!) 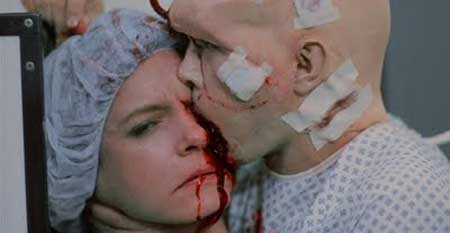 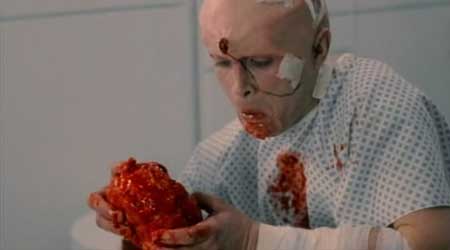 The next scene starts in a hospital, a schizophrenic ward to be exact. We are introduced to the snooty Dr. Bloch who runs the ward (played by Carolyn Purdy-Gordon, that’s it stand by your man). Dr. Bloch is being introduced to a young brainiac by the name of Dr. Katherine McMichaels. You see the police have assigned Dr. McMichaels to question Crawford. Police departments don’t like unsolved murders, especially unsolved murders with incomplete corpses, and especially murders in which the only witness is insane and claims that something ate his former boss’s head.

Dr. McMichaels and Dr. Bloch don’t exactly hit it off; you see both of them have different techniques when dealing with mental illness. Dr. McMichaels suggest that they perform a brain scan on Crawford, so they can see if there is any deformity with his brain. Upon inspecting the brain scan they learn indeed something is wrong with Crawford, his pineal gland has grown.

Dr. McMichaels brings up the suggestion that Crawford should be released to her, he obviously believes the things that he says, he believes a monster ate Dr. Pretorius’s head. She thinks that if they were to return to the house, that Crawford could reenact that faithful night. In Crawford’s reenactment all of the answers that the police are searching for could be found. The detectives in charge of the case agree and decide to release Crawford into Dr. McMichaels care, the detectives also assign former pro foot ball player Bubba Brownlee go with them just in case something might happen. Little do they know that Dr. Pretorius is far from dead, and that there are bigger and slimier things in the sixth dimension yet to come.

From Beyond is a very strange movie, but I am saying this in a good way. There are several scenes that will stick with you after viewing, such as the scene in which Crawford is found by Dr. Bloch in a lab eating brains. That wasn’t enough for you, how about multiple attacks against eyeballs; you see they suck the brain out through the eye socket. I know it sounds confusing, but trust me it all comes together and makes sense. 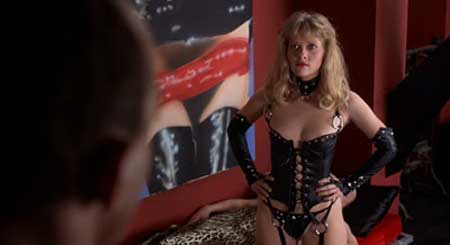 The creatures in this film though are the main highlight, in my own opinion. Not only do you get the jelly fish and eel monsters from before. There is also a giant worm like monster that lives down in the basement, not to mention Dr. Pretorius looks different (and worse) each time you see him. There is defiantly a lot of stomach churning FX going on here, every creature just drips with slime that you can almost feel while you watch it. The enlarged pineal gland is also another great image that belongs in every gore hounds memory. The snake like appendage tears out of Crawford’s forehead with a life of its own, until it too is destroyed in a great stomach churning sequence.

From Beyond comes from the same names that brought you Re Animator, and although it isn’t the film Re Animator is, it is still a worthy follow up and is definitely worth a look to those who love all things nasty and slimy.