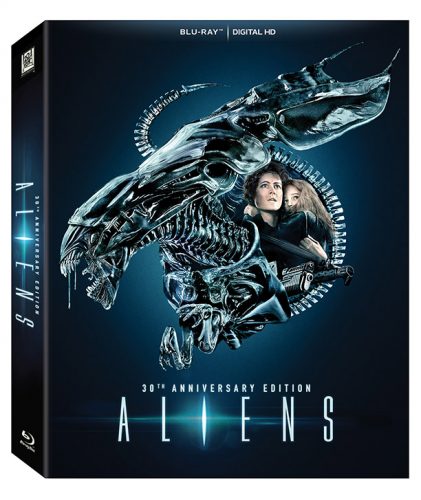 The planet from Alien has been colonized, but contact is lost. This time, the rescue team has impressive firepower, but will it be enough?

Ahh…1986, what a fine year it was. I had a cool fiance, a good job AND “Aliens” the first official sequel to “Alien” was released (No need to mention all of the Italian ripoff films with “Alien” in the title). And what expectations it brought along with it! No one had a clue as to how it was going to top Ridley Scott’s classic 1979 original, and although James Cameron had showed he could make one balls to the wall action/sci-fi film (1984’s “The Terminator”) it hardly meant he was the man to continue the “Alien” franchise. Man…we had NOTHING to worry about! 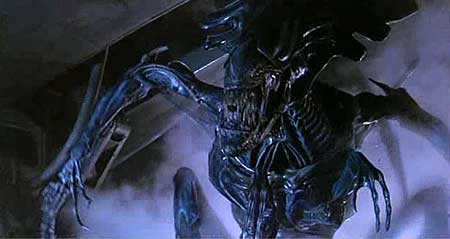 “Aliens” picks up 57 years after the end of “Alien” where we find Ellen Ripley (Sigourney Weaver) & her cat, Jonesy, still in a state of Cryo-Stasis after their ordeal on the star freighter Nostromo. It was on the Nostromo where her fellow crew members were summarily picked off by an entity that was recovered on the planet LV-426. An entity that is in essence the perfect killing machine, one that has a hive like mentality & wants to spread it’s horrific seed by implanting it’s embryos into your chest cavity. One that is, despite it’s size, lightning quick. Equipped with razor sharp claws & tail, a horrific extra “Jaw” in it’s mouth to make it easier for it to rip your throat out & above all else…it’s extremely cunning & nigh unstoppable. The perfect weapon. 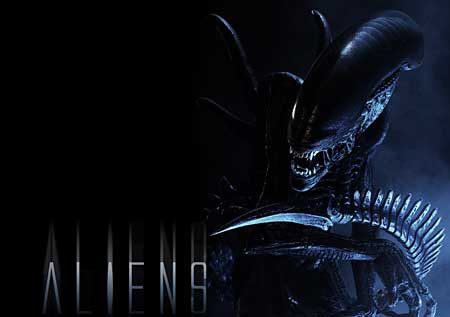 Ripley is found adrift, floating in her escape vessel by the “Company”. The group who owned the Nostromo & all within it, they are none too happy to hear her explanation of what happened on their freighter & have a hard time accepting the monetary losses incurred by her actions (She nuked the craft). But they cannot deny that some of her explanation rings true & therefore cannot prosecute her, what doesn’t make sense to them? The fact that planet LV-426, where all of the horror began, is currently populated by a group of “Terraformers”. A small colony of humans whose job it is to make the planet habitable for future groups of humans, larger groups of humans. No word from them on any so called “Aliens” traipsing about… 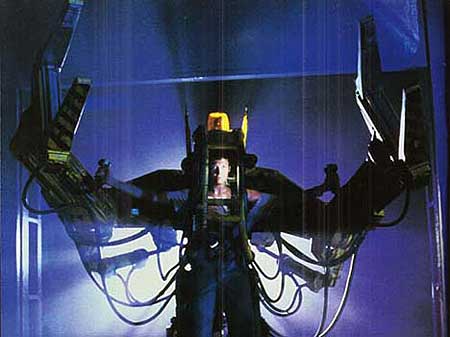 During all of this setup for the rest of the film, we learn that Ripley had a daughter & that her daughter died an elderly woman, having never seen her mother again after she left with the “Nostromo” all those years ago. Of course this only adds to the misery that Ripley is already going through. Think about it…she’s been asleep for 57 years, some of her closest friends & co-workers died horrible deaths in front of her very eyes AND she awakens after this long slumber to find herself something of a pariah & without her only child. She is profoundly adrift, alone & depressed. A stranger in a strange land… 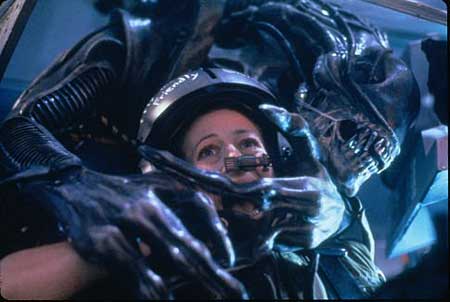 Shortly afterward, all communication with LV-426 has ceased and there is no good reason why. So all of a sudden, Ripley’s story about a predatory life form alive & well on the planet doesn’t sound so crazy after all. Ripley is recruited by the company to return to the planet with a group of heavily armed, battle toughened “Space Marines” as an adviser. An offer she initially turns down but her nights are bereft of sleep as she has continuous nightmares of the alien and she eventually relents with the promise that the job is to wipe out the creature completely. Not to bring it back for study (I know all of you have seen “Alien” so I’m not going to explain why this is so important to her. You already know why). 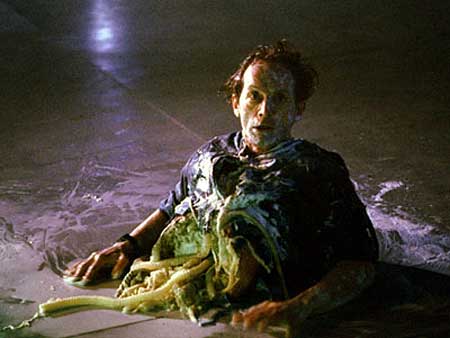 And it is from this point on that “Aliens” becomes one of the greatest sci-fi/action films ever made. The space marines are some of the toughest, funniest & yes…endearing characters to ever lumber across the screen with heavy weaponry at the ready. To a man (Or woman) they engage & demand your attention as soon as they appear. It’s obvious that they’ve been through a lot together & they have a honest desire to not only do their jobs well but to look out for each other as well. The one that the audience identified with most is Pvt. Hudson (Bill Paxton), who reminded me of the friend we all have that never ceases to irritate us but ALWAYS has our back when the sh*t gets thick & heavy. We all have a friend like this, I know it, you know it & more importantly, Cameron knows it. Which is why Hudson has the best lines in the film & why his character arc is the most engaging after Ripley’s. We care for all of them but Hudson is the one character we really identify with. 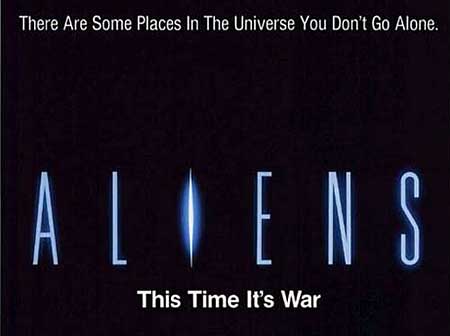 Upon their arrival on the planet the group finds no one but a young girl named Rebecca (AKA Newt) who is initially scared to speak & is living in a small room surrounded by garbage & survival kits. Ripley immediately takes to the child, suggesting that Newt is acting as a sort of surrogate to Ripley’s deceased daughter. There are signs of a ferocious firefight, bullet holes & wanton destruction everywhere they turn. But no signs of life. All of the colonists had surgically implanted tracking devices in their bodies as well which should make them easy to find but they don’t seem to be anywhere nearby. The whole colony reeks of death & desolation but the colonists are eventually found, along with an army of creatures who are hellbent on making Ripley & the marines next to fall to their onslaught. The initial battle between the two parties is one of epic proportions. One in which the majority of the marines fall to the sheer number of the creatures, hampered by the tight space they meet them in & by the fact that they see where they beasts are coming from. They are attacked on all sides & firing blindly at whatever moves, sadly that includes each other.

“Aliens” continues from this point as a sort of siege film, a futuristic “Assault On Precinct 9” if you will. Ripley & company are hunkered down awaiting a rescue that will never come as they barricade themselves against the oncoming army of aliens looking to use their bodies for implantation. Slowly, human nature comes to the fore as characters reveal their true colors & intentions & the film becomes a kind of a character study in which certain facets of their humanity emerge. Some of them are heroic, some cowardly but rise to the occasion, some traitorous. The bottom line is survival at any cost for all of them though. Sadly for them, the aliens don’t seem to subscribe to that theology.

“Aliens” was made without the benefit of any flashy CGI effects which makes it’s achievement all the more effective. It is something to see & to this day stands alone as a sort of standard bearer for all action films made thereafter. Aside from some (Effective) rear projection scenes, the film stands out in every way possible. It was & is a sight to behold in terms of cinematography, set design & special effects. Indeed, the film is so successful at conveying a mood of desolation & urgency that I couldn’t help but immerse myself into it body & soul. It is that effective. The acting throughout is of the highest order as well. Far more nuanced & deliberate than one would expect from this kind of film. Tellingly, Sigourney Weaver earned a “Best Actress” Oscar nomination for her amazing work as Ellen Ripley, a role she would essay in two more “Alien” films to date (“Alien 3” & “Alien: Resurrection”). Special mention should be made of Lance Henriksen & his role of Bishop, the pre-requisite “Android” character that every entry in the series needs to have. He manages to make Bishop both trustworthy & suspicious at the same time which is no small feat when you’re surrounded by such a intense group of actors.

The film also manages to save a surprise or two near the end, after we’ve been left breathless by the previous goings on. Just when you think it’s OK to breathe…you find yourself holding our breath again! I absolutely love introducing the film to a new pair of eyes to catch their reaction to the film. It has NEVER failed to knock them out of their seats & it never will fail to do so, even to my jaundiced eye. I’ve seen a lot of movies in my time people, a whole lot of movies indeed. But “Aliens” is STILL the one I’ll refer to if I’m asked about the most “Balls To The Wall” action film I’ve ever seen. And make no mistake, it is an action film first & a sci-fi film second. That’s another reason why it’s a work of genius, it works on both levels flawlessly without a hitch. Highly recommended!!

Coming onto its 30 year anniversary, Aliens is indeed a iconic horror science fiction film that must be seen. This special release provides all kinds of goodies for fans which include collectable art cards, and a Dark Horse comic art book. Though let’s not forget the contents which are listed as:

If you held off buying this on bluray, then you’ll surely want this version. If you have purchased it in the past, it’s a collectors edition offering alot for fans of the film.