1- Carrie (1976)
King’s first novel and first film adaptation: this is the one that started it all. And what a start it was; this movie gave us all a taste of what would become the staples of Stephen King movies. It features a regular girl with supernatural powers, a crazy, creepy mother, and lots of gore and mayhem. It also features John Travolta and stars Sissy Spacek in a role that she was born to play. Who else could have played such a fragile girl? And, as with other King movies, it builds up to one pivotal scene: the prom massacre. How awesome is that sequence?! You can hardly describe how stylish and effective it is.

2- Salem’s Lot (1979)
‘Salem’s Lot is, by far, King’s best novel and is undoubtedly the best vampire novel ever written (aside from Let the Right One In). This movie—actually miniseries—makes the list because: A) it’s directed by Tobe Hooper; B) David Seoul is amazing as our hero Ben Mears, giving us a reason to stick through 3 ½ hours of slow-burning horror; and C) it has the creepiest vampires I’ve ever seen. The kid vampires are terrifying in their corrupted innocence, their mother is beyond scary when she rises in the mortician’s office, looking for her sons, and Barlow is the scariest Vampire King this side of Nosferatu. This movie takes a while to get going, but once it builds up steam, there’s no stopping this juggernaut. Extra-scary bonus: show one particular scene from this film to little kids, and combine it with a lecture about the dangers of crime; I can almost guarantee they will never go to jail. 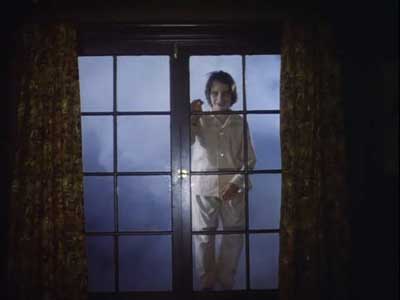 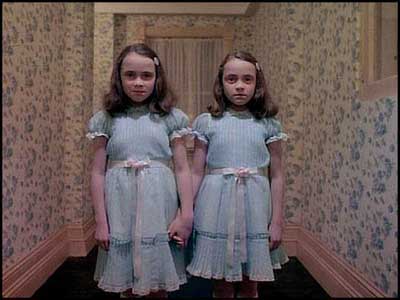 4- The Dead Zone (1983)
This is one of my favorite Stephen King movies because it toes the line between horror and drama with a preternatural grace. Christopher Walken stars as John Smith (aptly named to identify with the everyman), who awakens from a coma to find he has lost five years of his life and his entire world has come crashing down. He’s lost the love of his life, his mother’s gone loony, and he can see the future whenever he touches someone. All he needs to do is lay a hand on them—or something they touched—and he knows their deepest, darkest secrets, wants, and want-to-knows. I also love that King included a small side-plot about a serial killer that is deeply effective; Cronenberg, who directed the film, shows his mastery of the genre with said killer’s suicide scene. Bathroom/barber scissors are kept on high shelves in my house. 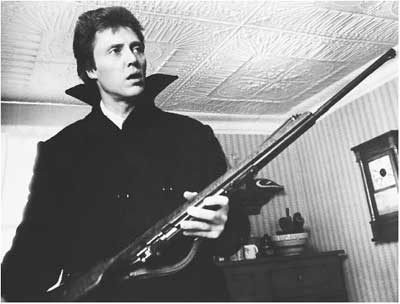 5- Stand by Me (1986)
Wait: this is a Stephen King adaptation? Yes. Wait: it’s not a horror movie. You’re right, but it’s horribly emotional. King knows that sometimes being human is bad enough. We don’t need killer clowns, vampires, or supernatural abilities (See: The Shawshank Redemption and/or The Green Mile). The setup seems simple enough: four kids go try and find a dead body that’s down by the railroad tracks. But what transpires on this journey is one of the most poignant coming of age stories I’ve ever seen. It’s funny, heartbreaking, and yes, a little scary. Stephen King is more than just a one-trick pony and this film proves it. 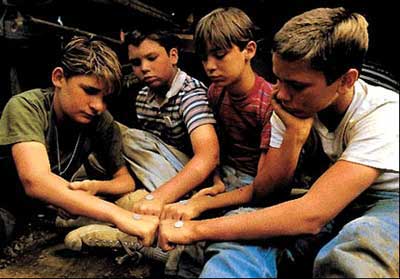 6- Pet Sematary (1989)
One of life’s most forbidden questions is: if you lost someone you love, how far would you go to get them back? Pet Sematary answers this question. This film is also full of scares, including the terrible death of a toddler (inspired by something that nearly happened to King’s son), a dead sister coming back, and tendon slicing. 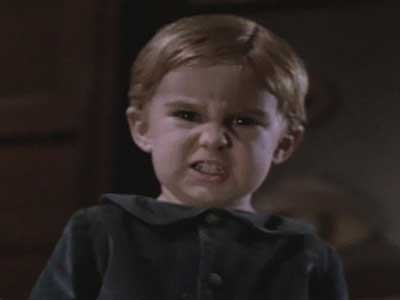 7- Misery (1990)
Ugh—that hobbling scene! And Kathy Bates makes Annie one twisted lady. A brilliant piece of work by Rob Reiner, Misery stars James Caan as Paul Sheldon, a bestselling author who’s trying to break away from the formula that made him a millionaire and write something new. He always writes at a cabin up in who-knows-where, and after finishing the book, he gets caught in a snowstorm and flips his sports car. Luckily, Annie Wilkes rescues him. Did I say luckily? Sorry. I meant: RUN FOR YOUR LIFE, PAUL! Only he can’t run away, because his legs are broken. It takes a lot of skill—and good acting—to make a movie that takes place largely in a bedroom scary. There’s enough terror in a crazy fan holding you hostage for two movies, and they packed it all into one. That’s the kicker for this movie. Also, go and read the book. It is almost exactly the same as the movie, with one major difference; it’s one of only two books I’ve ever had to stop reading because it got too intense. 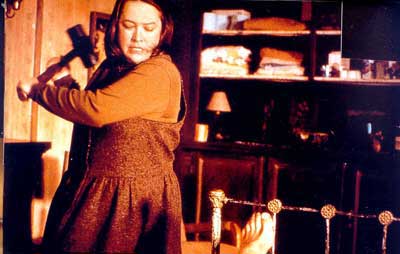 8- It (1990)
I love Tim Curry. Love, love, love Tim Curry. Most people, it seems, either love him because he did Rocky Horror, or hate him because he was Pennywise in It. I love him for both of these roles. That man is a genius and deserves more recognition that he gets. That said, It is a pretty scary movie, although not as scary as most people say it is. The reason for this: it’s only scary when you’re a kid. Once you grow up, it’s just a good movie. However, this is the brilliance of the movie, because it’s about the fears you have as a child. Plus, everyone likes balloons, and wants to float… don’t you want it?! 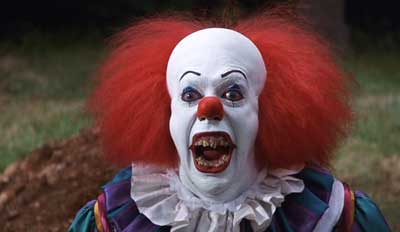 9- Needful Things (1993)
This movie is so great. Satan comes to Maine and opens up an antiques/odds-and-ends store called Needful Things, which gives the residents of the sleepy town whatever they desire. Do you think your husband’s having an affair? Here, take this diary that proves it. Have gambling problems? Don’t worry; I have a toy that accurately predicts the outcomes on horse races (in other words, your gambling solution). Max von Sydow is brilliant, as stated in my previous list (13 Greatest Horror Actors), and the movie is genuinely unnerving and chilling. 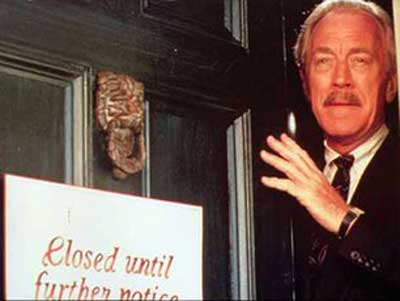 10- Apt Pupil (1998)
One of the great things about King’s work is that it takes the everyday man and makes him face extraordinary dangers or unusual situations. Apt Pupil is no exception. In this film a high school student discovers that a Nazi fugitive is living near his home. At first the old man seems harmless—pretty much worthless, in fact—until his temper flairs and the boy, Todd, realizes that there is more to this man than meets the eye. He threatens to turn the curmudgeon over to the police if he doesn’t spill all his dark Nazi secrets. The relationship between the two turns from blackmail to dependency to a relationship dependant on blackmail: in other words, things just go from bad to worse. The examination of this relationship is very in-depth and well-executed for one of King’s works, but it’s just as chilling as any of his creature features. I won’t spill any more details, other than that Todd was, indeed, an apt pupil. The late Brad Renfro puts in one of his greatest performances alongside Sir Ian McKellen in this King thriller. 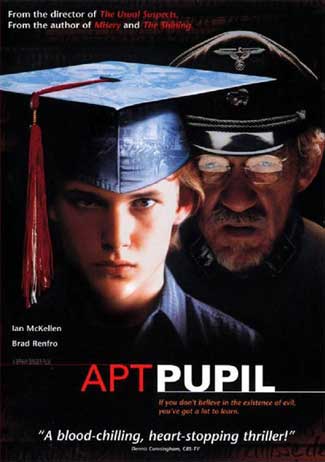 11- Dreamcatcher (2003)
Did anyone actually see Dreamcatcher besides me? I’m not sure, because no one ever talks about it, which is sad, because it’s one of the best Stephen King adaptations this side of The Mist. Damian Lewis, anyone? Yes, please! Jason Lee and Morgan Freeman? Yes and yes! Thomas Jane? I’ll take two. How about Donnie Wahlberg as Duddits, where he’s nearly unrecognizable? I think we’ve got the makings of an amazing movie here! And let’s not forget the awesome special effects, cool storyline, and the fact that this movie plays off one of King’s biggest strengths: it balances scares with emotion, which people seem to forget. Fear is an emotion, sure, but there’s more to horror movies than just blood and guts and screaming. Adrenaline is a natural response to fear, but the adrenaline you get when your best friend’s life is on the line is something else altogether. 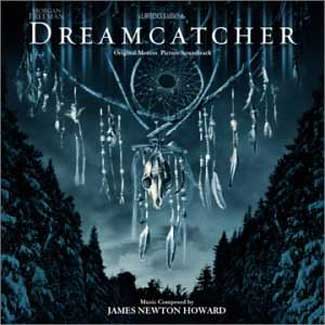 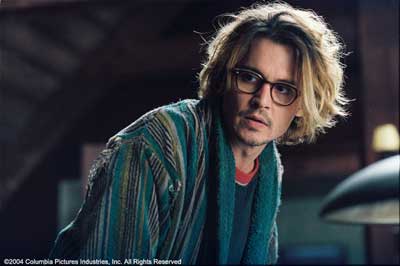 13- The Mist (2007)
Love the ending or hate it, you can’t deny that this movie was awesome. If you don’t like the ending, just forget it. You can go back to your home of rainbows, unicorns, and cupcakes. I, however, like to live in the real world and this film is one of the most realistic of all Stephen King adaptations. Thomas Jane is amazing, as is Marcia Gay Harden, who gives us one of the greatest female villains in recent horror history. This film is also remarkable because not only is it intense, emotionally and in its action-packed reels, but it also works remarkable SFX. You see very little of the monsters, but it’s still scary as hell. But I suppose that’s because Stephen King has always been in touch with the most universal truth: humans are the worst monsters of all. 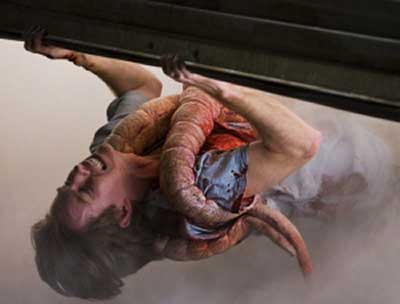