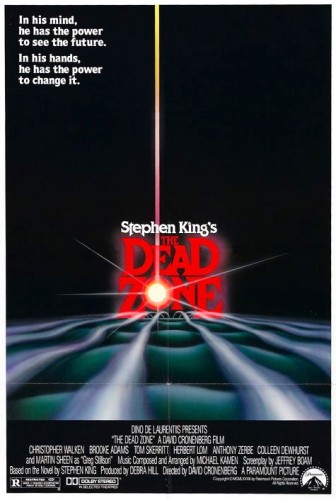 “After awakening from a five-year coma – the result of a serious car accident on his way home from an outing with his girlfriend – high school teacher Johnny Smith finds that he has developed the ability to foretell events. When a nurse is bathing him, he realizes that her house is on fire, endangering her daughter. When his doctor and confidant, Dr. Sam Weizak, touches him he has flashbacks to the trauma Weizak suffered when separated from his mother during World War II but also knows that the woman lives in a nearby city. Johnny also finds himself pining for his girlfriend, Sarah Bracknell, who has now married and has a young child. With his powers misunderstood, Johnny relocates and tries to put it all behind him, working out of his home as a tutor. However, when he shakes the hand of a young and upcoming political candidate, he is confronted with evidence that the man will, as President of the United States, launch a cataclysm that may destroy all of mankind.” 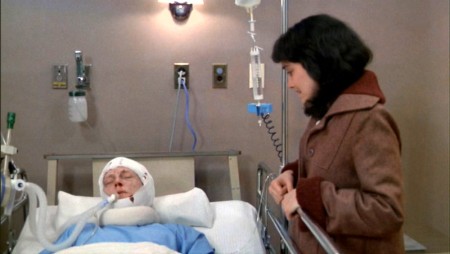 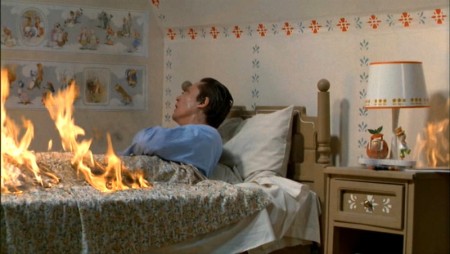 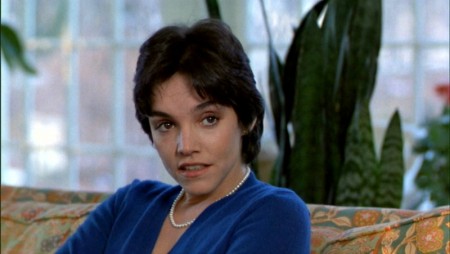 “When people ask me ‘Why do you make horror films?’ I immediately have to go back to Aristotle and his theory of catharsis as being a justification for high tragedy, or even comedy. For me, horror films are films of confrontation, not films of escape at all but, in a horror film, one confronts things that you might not really want to cope with in your real life, in a kind of safe dreamlike way. But you will meet these things eventually – I’m talking about aging, death, separation. That’s the metaphorical level that horror films work on. All my films, I’m aware of it now, are very body-conscious because, for me, the body is really the source of horror in human beings. It is the body which ages and the body which dies. It really is very Cartesian of me, I suppose, because to me the mind-body split is the source of the mystery and also the horror, which I think ultimately we have to confront. You see people whose minds are perfectly together while their bodies begin to distort, begin to change, begin to age, begin to rot, whatever. That to me is horror – I don’t want to give my audience a chance to get too distanced. That’s why my films are very urban and very contemporary in their setting.”

Pretty impressive for an ad-lib answer in a radio interview. Yet Cronenberg may be conscious of an inadequacy in this sort of argument. Max Renn, the hero of Videodrome (1982), uses the catharsis argument during a scene set in a talk-show interview, and there Cronenberg shows it as an obviously glib response from a man unwilling to confront his deeper motivations. Almost immediately after Videodrome, however, he proved that, if he forced himself, he could work within the conventional movie system. One imagines that, if he had not proved this, the financing of each new film would have become more and more difficult. His adaptation of Stephen King‘s novel The Dead Zone (1983) is not a typical Cronenberg movie, but it is nevertheless an extremely clever adaptation. 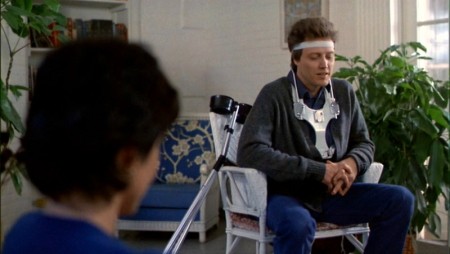 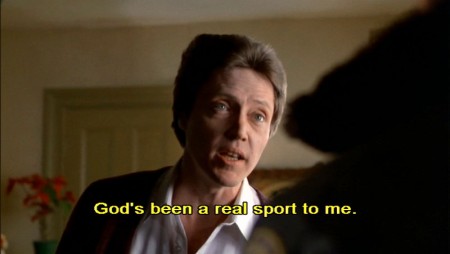 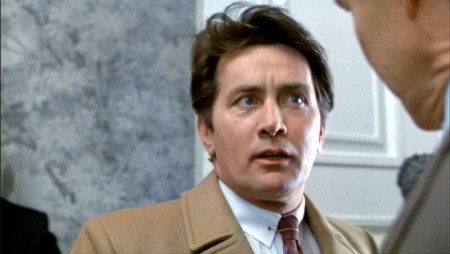 Christopher Walken plays Johnny Smith, an amiable schoolteacher with a beautiful girlfriend named Sarah (Brooke Adams) who is absolutely crazy about him. When Johnny goes on a fateful drive one night, he meets with a terrible accident and ends up in a coma. Awakening to discover his ‘trance’ has lasted five years, he also learns that his soulmate has married someone else and had a child, while the injuries to his legs have left him incapacitated. Just when the devastating after-effects from his car crash couldn’t get any worse, Johnny soon discovers he has a psychic ability to forecast the personal disasters of those people with whom he comes into close contact.

Looking back on The Dead Zone after a couple of decades, Walken’s acting during each vision does have a cheesy flavour to it, although his appearances on Saturday Night Live have only affected the intensity of his performance in retrospect. With an episodic narrative constructed around a string of strange events taking place in the same snowscaped town of Castle Rock, things get very creepy when the sheriff (Tom Skerritt) requests Johnny’s help on an unsolved serial killer case. While Johnny sinks deeper into depression convinced that he’s cursed, Cronenberg’s taut control of the medium reaches a pinnacle when the reality of Johnny’s world begins merging with his prophetic visions of Reagan-era America. 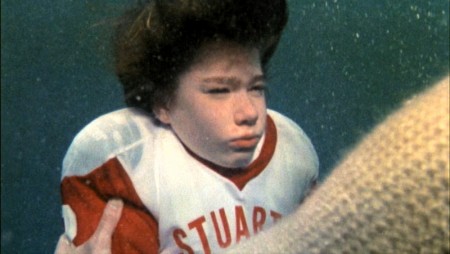 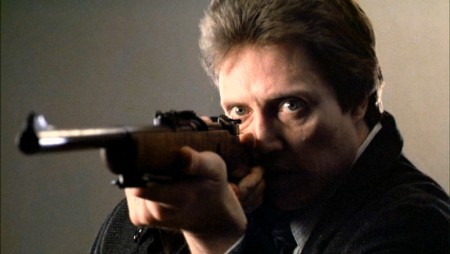 Quoting from Washington Irving‘s classic Gothic tale The Legend Of Sleepy Hollow in The Dead Zone, our disabled and cursed protagonist affiliates himself with the tale’s hero, Ichabod Crane: “As he was a bachelor and in nobody’s debt, nobody troubled their head about him anymore.” In an inspired piece of casting for Sleepy Hollow (1999), Tim Burton had Christopher Walken play the villainous Headless Horseman – while Burton managed to utilise Walken in an exiting modernist homage, Cronenberg uses the Irving passage poetically, making it the perfect epitaph for one of Stephen King’s most lonely and wretched characters. The story of a sensitive man feeling himself progressively dehumanised and placed apart by a talent he loathes and wants nothing to do with, is evoked with a warmth that may surprise those familiar with the rather chilling quality of Cronenberg’s other work. He made this film with many of his usual team, including cinematographer Mark Irwin and production designer Carol Spier.

For those with the stomach to tolerate the distortions and metamorphoses of the flesh and the spirit that have characterised Cronenberg’s work, he is one of the great auteurs of American cinema. He has remained true to his slightly Manichean vision, and has continued to subvert the smugness of society by producing appalling images of what distortions of life may lurk beneath its repressive surface. He belongs to that small group who have fashioned the genre film into a secret weapon for exposing the soft underbelly of life in the West. Keep that in mind until next week, when I’ll have another opportunity to inflict upon you the tortures of the damned from that dark, bottomless pit known as Hollywood for…Horror News! Toodles!