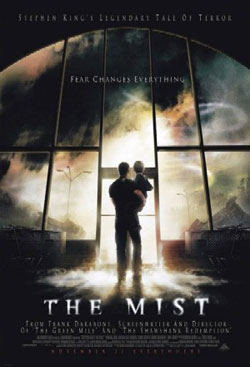 After a terrible storm, a curious mist slowly engulfs a small New England town. As it approaches a local grocery store, a man runs screaming from the obscure haze, “There’s something in the mist”! Artist, David Drayton, his son, and the rest of the customers must await their fate inside the store, locked away from this frightening fog. Their very sanity is threatened as, from this mysterious mist, come unnamable monstrosities.

I am surprised no one at Horrornews.net has yet to review The Mist. This film was pretty popular, and did very well as horror films go. Last night I finally watched this film, as it was intended to be seen. Director, Frank Darabont, originally wanted it to be presented in black and white, but as audiences would probably not appreciate such a genuflection to classic horror, unfortunately it was put out in color. So I finally got the special 2-disc edition and watched the black and white version, and it was much cooler. Don’t get me wrong, I enjoyed this film when I saw it in theatres a year ago, but when I watched it in B&W, it was like a whole new movie. It felt really timeless, like an old school classic I had just found out about, and was sitting down with for the first time. 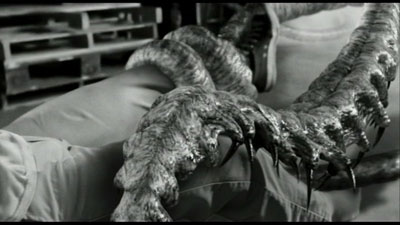 Frank Darrabont is an awesome storyteller, not that it was difficult considering this was not his first Stephen King adaptation. It also was not Darabont’s first time dealing out the horror, he wrote Nightmare 3: Dream Warriors(1987), The Blob(1988), and The Fly II (1989). He, just like with those 3, did a kick ass job on The Mist. 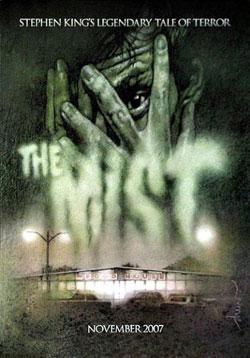 The look of the film is great; definitely capturing the “home town” feel of Maine, as well as the feeling of familiarity with the sets. The FX were eh, considering they were all CG, which I hated, but whatever. I guess I’m gonna have to get used to that sh*t. It is a bit easier to take in the B&W print though. Some of the creatures were horrifying, but others weren’t that impressive. This, however, isn’t the true source of horror in this film.

Like Dawn of the Dead, the real scary part of The Mist is how people react to a traumatic situation. The characters in this flick are well thought out and feel so real. From the unsure yet coyly brave grocer, and the mistrusting lawyer, to the soldiers tormented with guilt, and the unbalanced religious doomsayers, all the characters and reactions feel natural. The ultimate horror shows its ugly face when the corralled crowd sides with the crazy Jesus lady who believes she is a vessel of God’s will. The people turn on the proposed sane members of the group and suddenly the idea of venturing out into the mist becomes more appealing then the false safety of the store. The idea that “Mob Rules” mentality can take over in the most insane tragic scenario is ghastly. Especially, when that mob is at the service of a Church Lady on a holy power trip demanding “expiation” with blood.

Thomas Jane (Punisher 2004: worst movie ever) does a really good job in this flick. He shows some believable emotion in, what I think is, his best role yet. The rest of the cast is pretty %$%*@in sweet, as well, everyone doing just enough to keep the story rolling, and all doing their part. If the role was a random tough guy with one-liners, then random tough guy delivers and nothing more. If it’s concerned mother scared for her child’s life, that’s what you get. Two important characters being Marcia Gay Harden’s Mrs. Carmody and Andre Braugher’s Mr. Norton. Harden’s performance as the aforementioned psycho, bible-thumping recluse, is perfect. As only the best villains can, she fills the audience with such blood chilling hatred for her character, it is astounding. 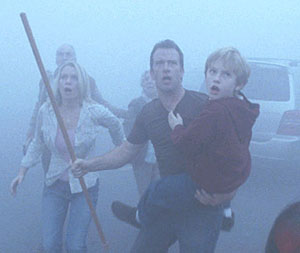 Like her, Braugher’s Norton is so uncomfortably stubborn it almost incites face-smashing rage, but we’ve all met people just like this in real life. Among the protagonist characters we find Billy Drayton (Nathan Gamble) who, at 10, does a wonderful job manifesting a child’s fear. Mrs. Reppler(Frances Sternhagen) is so great as the “take no sh*t” sweet old lady. It ‘s clear she’s not %$%*@ around as she hurls canned peas at upstarts. With an awesome cast, an awesome director, and an awesome story, it’s hard to not get an awesome movie, and The Mist is just that. Even with its, sometimes weak, monster FX, this flick still delivers the fright. Not to mention the ending, proclaimed better that the original story’s by King himself, is jaw droppingly badass! 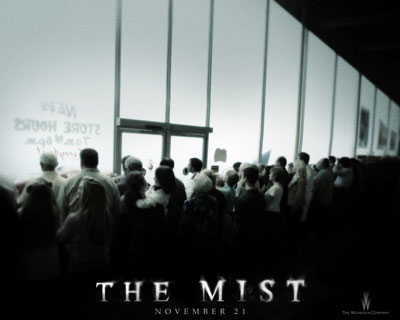 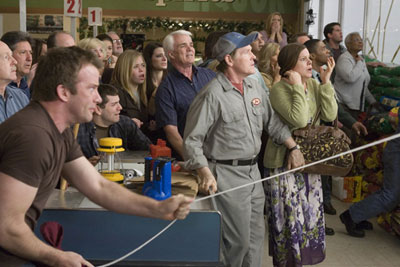 Anyway you watch it (No joke, the Black and white version is so much better) The Mist is a damn cool horror film, and hey. . . not a queer ass remake! Hip Hip Hooray!