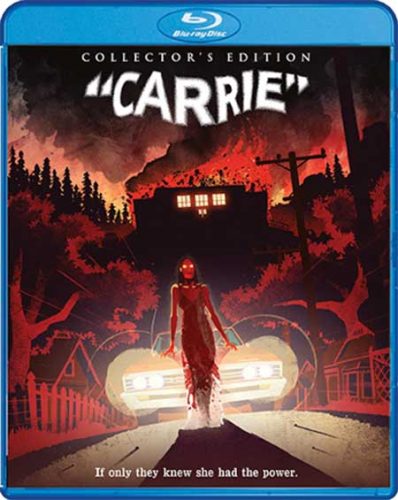 “The story of Carrie White, a girl brought up, almost in isolation, by her psychotically religious mother Margaret. After an embarrassing incident in the showers causes her fellow pupils to tease Carrie ruthlessly, her teacher Miss Desjardin disciplines them severely. Determined to have revenge, the other students hatch a plot against Carrie, which turns horribly wrong when Carrie’s strange mental powers are unleashed during the school prom.”

No one is better at playing shy, lonely, troubled girls than Sissy Spacek, on television as well as the cult film Badlands (1973). In 1976 she found her ideal role in Carrie (1976), a miserably unhappy girl who, at home is constantly chastised and physically abused by her loony religious-fanatic mother, and at school is unmercifully mocked by classmates because she’s noticeably different. As the eternal wallflower, Spacek is painfully convincing. Carrie White always looks downward to avoid eye contact, keeps her face hidden by messy hair, holds her books tightly against her developing breasts, keeps her shoulders slumped, pulls her sleeves over her hands and, at those rare times she is forced to speak, almost whispers as if afraid she’ll be yelled at or laughed at. 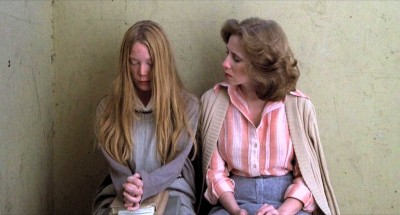 Spacek saw Stephen King‘s horror story as that of a young girl who is unable to express herself verbally after so much mistreatment, she considered Carrie a ‘secret poet’ and thought about the terrible feeling of having to suppress one’s true nature. Because Carrie can’t speak or muster the courage to act on her longings (sexual, too, now that she’s just had her first period), she develops strong telekinetic powers. In King’s book, she’s not that sympathetic, but Spacek puts us firmly on her side, we identify with her depression and her happiness when invited to the prom, and her need for revenge when the one happy night of her life is ruined by her mother and schoolmates. 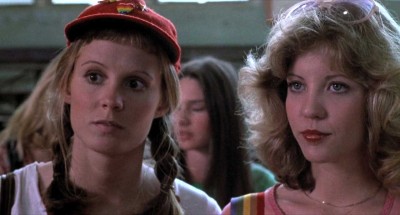 Director Brian DePalma saw King’s story as a religious morality tale. His film deals with the bigotry, conservatism, peer pressure and persecution that can be found in any high school. Ultimately it becomes a story of retribution, teenage or divine, in which Carrie uses her God-given telekinetic powers to destroy almost the entire school population, leaving them to burn in hell (the high school), and finally fights back against her mother, played with gusto by veteran Hollywood actress Piper Laurie, just before co-starring with a mentally-underdeveloped Mel Gibson in the touching Australian film Tim (1979). 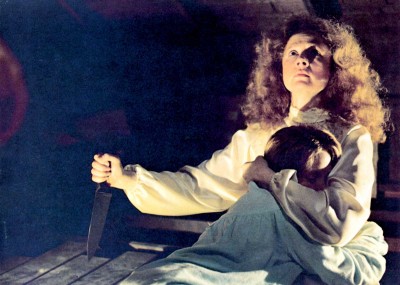 This enjoyable, impressive horror film gets more violent towards the end. DePalma seems to be getting back at the teachers and girls who drove him crazy when he went to high school, but it’s still lively, consistently amusing and genuinely touching. Young Nancy Allen and John Travolta are hysterically funny as the foul-mouthed sadistic teenage couple who humiliate Carrie by dumping pig’s blood on her during the prom. Other fine performances came from then-unknowns William Katt (who apparently refused the role of Luke Skywalker in favour of Carrie) as the boy who discovers Carrie is a gem among the clones, P.J. Soles from Halloween (1978) and Rock’n’Roll High School (1979), as well as Amy Irving and Betty Buckley. 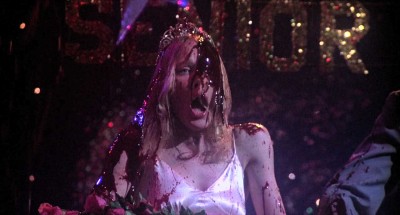 As in all Brian DePalma films, you’ll be able to pinpoint many Hitchcock references, most noticeably Psycho (1960), Marnie (1964) and The Man Who Knew Too Much (1956) – when Amy Irving tries to warn Carrie of impending disaster, it recalls Doris Day at the Albert Hall, for instance. But the film is most indebted to the story of Cinderella: You have your proverbial ugly duckling, the ball at which she looks beautiful, the handsome prince, the catastrophe waiting to happen, the evil mother, and many jealous females who could easily be Cinderella’s step-sisters.

Finally, since Carrie in 1976, screenwriter Lawrence D. Cohen seems to have made a pseudo-career from adapting Stephen King stories like The Tommyknockers (1993) and It (1990), as well as a rather simplified film adaptation of Peter Straub’s novel Ghost Story (1981). Will no one else give poor Larry a job? Unable to tear himself away from his origins, he was even associated with a musical version of Carrie back in 2001. I’ll leave you with that terrifying thought in mind until I return to sterilise you with fear during another terror-filled excursion to the dark side of Hollywood for…Horror News! Toodles! 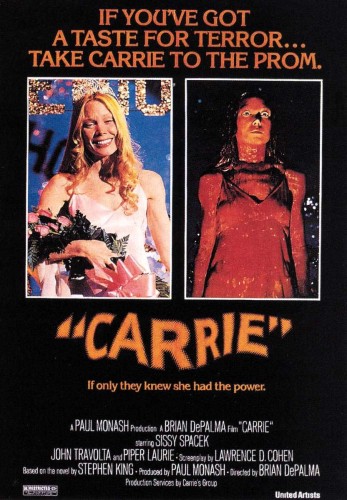