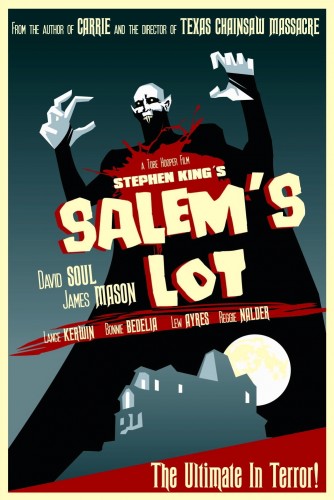 SYNOPSIS:
“Salem’s Lot is a town which a new member, Mr. Straker, has taken as his new ‘home’, and has a mysterious partner, namely Mr. Barlow. Not too long after Straker arrives in Salem’s Lot, people start disappearing from sight and dying from odd causes, and no one is sure why, including Ben Mears who is in town to write a new book on the town’s rumored haunted house called the Marsten House, which overlooks the town and hides a terrible secret about to be unleashed.” (courtesy IMDB)

REVIEW:
There seems to be a general, if undiscussed, agreement among filmmakers that vampires are more refined and cultured than werewolves and infinitely more presentable than zombies. This is a little strange because, like zombies, vampires are undead (which is quite different to being alive) and, like werewolves, they symbolise the ravenous beast within. Indeed, Christopher Lee’s Dracula (1958) specialised in animal snarls and bestial hisses and, in the original Nosferatu (1922), Max Schreck looked more like a rodent than a human.

1979 was a big year for vampires. At the Hollywood end of the spectrum, Universal Studios attempted to reboot their romantic horror franchise with a lavish retelling of Stoker’s classic Dracula (1979) starring a young Frank Langella making a convincing vampire, all urbane wit, charm and well-mannered sexiness when at ease, a ferocious beast when aroused. At the intellectual end of the spectrum was a German film directed by Werner Herzog, Nosferatu The Vampyre (1979), a beautiful dream-like remake of Nosferatu. For surprisingly long stretches of the film, Herzog submerges his own characteristic concerns in a loving recreation of Murnau’s imagery, now in colour and sound, with the death-yearning Klaus Kinski accurately made up to look like Max Schreck.

Less interestingly, the same Schreck makeup appeared in quite a different vampire story, the two-part television miniseries Salem’s Lot (1979) based on the bestselling novel by Stephen King. Released theatrically outside the USA, the film’s running time was around 112 minutes but, if you insist on inflicting this somewhat dodgy adaptation upon yourself, I recommend you to seek out the complete 184 minute version, which should greatly enrich your perspective of the plot.

Horror fans were eager to see this, for it was directed by Tobe Hooper, of The Texas Chainsaw Massacre (1973) fame. Richard Kobritz, producer of the suspenseful and acclaimed John Carpenter made-for-television movie Someone’s Watching Me (1978), handpicked Mr. Hooper to direct Salem’s Lot, which had been in development for quite some time already with The Exorcist (1973) director William Friedkin briefly attached as producer.

Salem’s Lot became Hooper’s most polished and mainstream film to date, but the deadening propriety of television took its toll, and there isn’t much left that’s terribly disturbing, although one or two TV taboos are mildly contravened: Children are placed in jeopardy – there is an excellently creepy vampire, a small boy, who floats outside his brother’s bedroom window with a very nasty smile – and, in an entirely non-fantastic scene, a cuckolded man takes humiliating revenge on his wife’s lover. In fact, this is the most typically Hooper sequence – it has all the sordid sweatiness of real human fear, and it makes the vampire sequences look a bit hollow in comparison.

Although supported by an experienced cast of character actors (Lance Kerwin, Geoffrey Lewis, Lew Ayres, Elisha Cook Junior, amongst others), David Soul makes an extremely colourless hero in a predictably wet bit of television casting. Unable to shake his seventies persona of Hutch from Starsky And Hutch, Mr. Soul moved to London in the nineties, forging a brand new career in live theatre, and became a British citizen in 2004. He appeared as himself in the first season of the comedy sketch show Little Britain, and co-starred with David Suchet and James Fox in Agatha Christie’s Poirot: Death On The Nile (2004). It was about this time that Mr. Soul was also a guest on the popular BBC car show Top Gear, and almost became the show’s fastest driver but, somehow, he managed to break the car’s gearbox just before the finish line.

Unfortunately, the one really inspired bit of casting didn’t quite work out. Hollywood veteran James Mason practically sleeps through his role of the Renfield-like Mr. Straker. One can easily imagine Mr. Mason finishing every scene with the words, “Can I have my cheque now please?” Speaking of which, since the early seventies, Mr. Mason has always worked contractual clauses guaranteeing bit parts for his wife, Australian actress Clarissa Kaye. We’ve seen Mr. Mason enjoying much better times in such films as Odd Man Out (1947), 20,000 Leagues Under The Sea (1954), Journey To The Centre Of The Earth (1959), Lolita (1962), Age Of Consent (1969), Frankenstein The True Story (1973), Heaven Can Wait (1978), The Boys From Brazil (1978), Murder By Decree (1979), Yellowbeard (1983), and his extraordinary final film role as Doctor Fischer Of Geneva (1985).

Despite its all-too-obvious problems, the 1979 adaptation of Salem’s Lot looks like a classic when compared to the 2004 remake written by Peter Filardi, whose only real hit was Flatliners (1990) fourteen years before. Bottom line? Read the original novel instead – neither film version is able to capture the all-embracing quality of Mr. King’s excellent story in which an entire town is convincingly destroyed. Now, having demonstrated to you the perils of probing the dark depths of Hollywood, I’ll vanish into the night, after first inviting you to rendezvous with me at the same time next week when I’ll discuss another dubious treasure for…Horror News! Toodles!