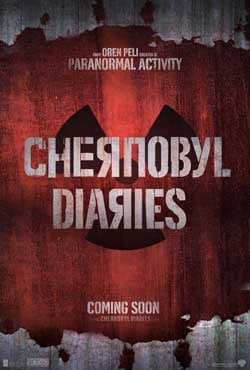 Six tourists hire an extreme tour guide who takes them to the abandoned city Pripyat, the former home to the workers of the Chernobyl nuclear reactor. During their exploration, they soon discover they are not alone.

Written by Oren Peli, you have a pretty good idea of what kind of material they’ll be throwing at you. This latest release which hit theatres does have a moving camera look to it, but not the trademark cinema verite we’ve seen in some of the other Peli films. “Chernobyl Diaries” is directed by Bradley Parker (his directing debut) and is filmed in Serbia and Hungary. 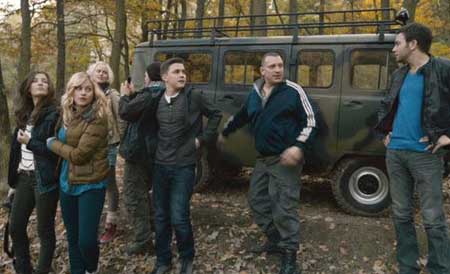 The lead in to this film won’t win any awards for originality…I believe we’ve grown accustomed to the “group” on vacation aspect to a strange foreign country. Kiev, Ukraine provides a worthy destination for Chris (Jesse McCartney), girlfriend Natalie (Olivia Taylor Dudley), and friend Amanda (Devin Kelley) who are visiting Chris’s brother Paul (Jonathan Sadowski) who is already living there. Like a good tour guide, Paul shows them the city and the sites but surprises all with a special mystery tour called the “extreme tour”. The tour will take them into the abandoned city of Pripyat just next to the famed area of the Chernobyl Nuclear Power Plant. The story goes that the town was abandoned when the Chernobyl Power Plant had it’s famed mishap. Radioactivity still echoes thru out but low enough to allow them to visit for a few hours. Their local tour guide Uri (Dimitri Diatchenko) states he had been their several times. 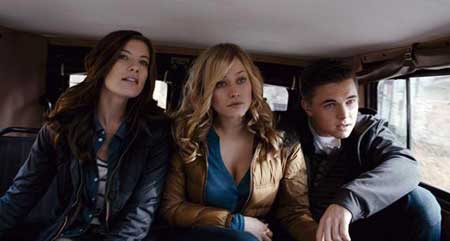 All seems well until they decide to take a back route in when the military guards deny them access. They arrive just as planned and take a few opportunities to do some site seeing and picture taking. This all begins rather as expected…which is the lead up to more intensity. When their car won’t start they begin to realize that they will have to spend the night till help can come. The night though is not without its problems and vicious occupants. 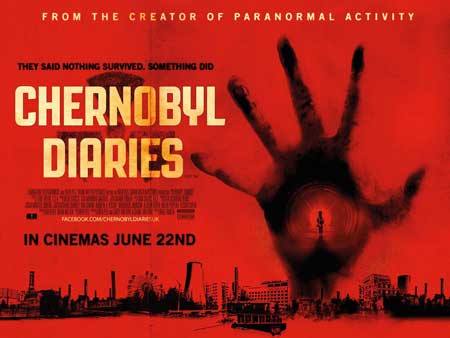 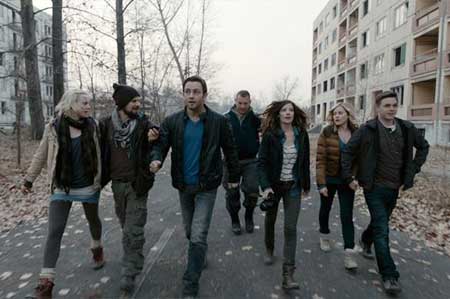 Very quickly the group begins to descend into panic, isolation, and worry. But the fun has only started as they stray to investigate the grounds and the strange noises they’ve been hearing. At this point you can pretty much guess the pace, the outcome and the direction of where its all leading. Despite a few early thrills, it becomes a bit tiresome and predictable. 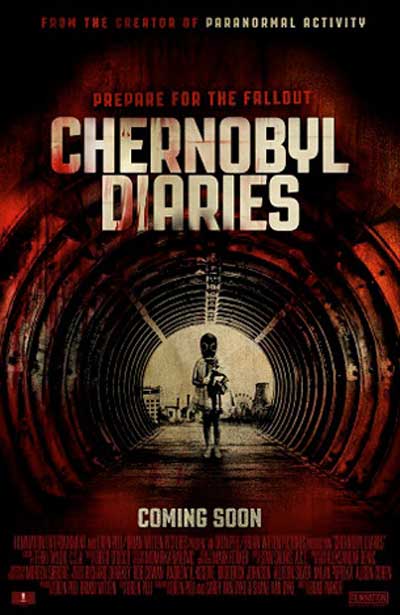 While I will state that the film has it’s share of tension and suspense, it also feels much too much like maybe the tired old routine we’ve seen in other setups. Its synopsis states “they are not alone” which most people will quickly figure as ….”oh ya radioactive people…I get it”. We went this route in the past “Hills Have Eyes” films which did moderately ok for it’s theme. “Chernobyl Diaries” of course has its Chernobyl looking set that separates it apart but not to its maximum potential. I think it will deem itself as an “ok” film but maybe not enough to warrant a theatre trip cost. A film like this would be just fine in a straight to DVD debut, so its theatre run may be a bit too ambitious for its low budget production look. The set that was used, although…… was a nice addition making “that” aspect work. 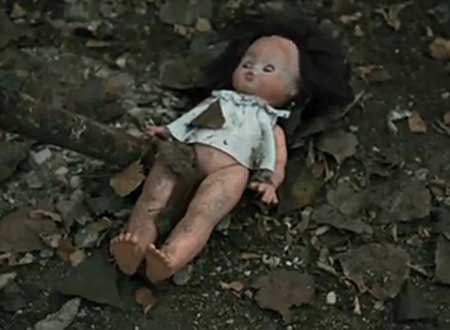 “Chernobyl Diaries” indulges in our curiosity about everything foreign and off limits. Spending a weekend in the Ukraine and taking a underground tour trip brings us back to our “Hostel” days, though in this case, I came away expecting to get a little bit more out of the experience. We see very little of the infected cretins which was probably a direction call to stay minimalistic. Though 1 nice close up would have at least peaked the curiosity a bit better rather than feeling like you caught the actors in a local haunted attraction fun ride. In fact I think I saw that monster from “The Fun House” movie doing a cameo (pun intended) 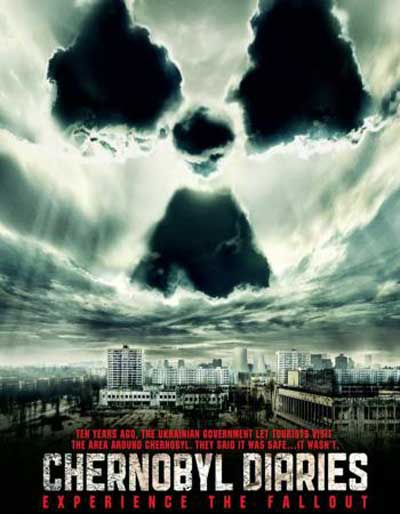 Oren has been on streak the last few years, but like every trend, we can only handle so much before we hunger for something a bit different. “The Devil Inside” was sort of the straw that broke the camel’s back for many who now maybe just prefer classic movie making over “run and shoot” motion. The film has received mixed reviews which range from bad to just ok. I think on a whole, you can stand to watch it but maybe not without your share of disappointments. 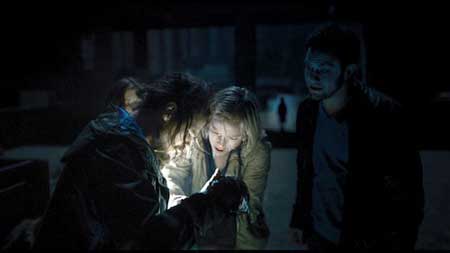