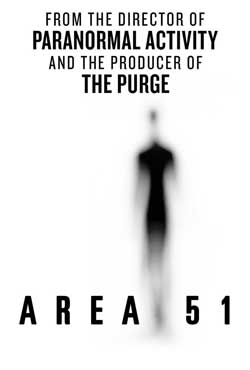 Found footage is the bane of any viewer of horror films. While, conceptually, the idea can be very interesting, most often it is simply an excuse for lazy filmmaking, shaky camera work, poor to non-existent scripting, and a recipe for complete disappointment. Films in the genre that truly shine are a rarity, most fall flat, and Area 51 falls flat while trying to walk the middle ground of not spectacular but also not wholly disappointing. Area 51 partially succeeds in creating an atmosphere of tension, but there are no real scares.

Area 51 begins, as so many of its ilk do, by showing small clips of people being interviewed about their missing friends. We learn how Reid suddenly became obsessed with UFOs and Area 51, and how he and several friends vanished after going out to investigate the area. Then the found footage begins with Reid and his friends Darrin and Ben arriving at a party out in the desert. It is actually a fairly typical Vegas/High Desert party with drinking, singing, and a pool. It was nice to see a Vegas party actually portrayed properly as opposed to a drug-fuelled showgirl -fest. But then, during the party, all the lights go out and, when they return, Reid is gone. He is later found wandering on the road, disoriented, and not forthcoming about how he got there. 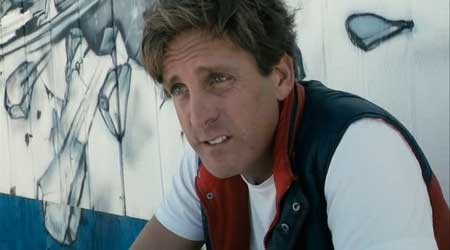 Three months later we are introduced to the new Reid, obsessed with UFOs and Area 51. He has a plan to breach the security of the base, and his friends are going along (mostly to humor him). We see them gathering their assortment of gear, frequency jammers, gas masks, tasers, and all sorts of other items both mundane and obscure. We are given the basic facts about Area 51; its enormous size (roughly the size of the State of Connecticut), its mysterious history, and its high state of security. As things progress to Las Vegas proper we are introduced to other pieces of the lore, such as JANET airlines (Just Another Non-Existent Terminal) with footage of what looks to be an actual Janet flight taken as it arrives at McCarran airport. If it isn’t, it is still well done.

Reid gets into contact with Jelena, the daughter of a former base employee who “dug too deep” and was killed for what he learned. Discussing matters with her, Reid hatches a plan to get the security badge and fingerprint that they will need to move about the base. His plan? Burglary. 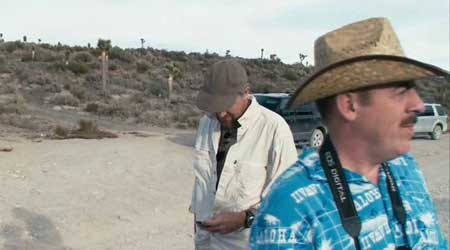 Things go downhill from there, at least for a while. By the end of the burglary/home invasion sequence, we no longer have any sympathy for Reid. Anyone willing to essentially be the monster hiding in the closet of a better film isn’t someone that most folks will relate to. This sequence plays out like the inverse of paranormal activity as we are treated to night vision footage of people sneaking around the house while the family sleeps, mostly unseen. Indeed, it is Ben (who refuses to go in and is very unhappy about it) who becomes the anchor to realism for this film afterwards; angry about the whole thing he wants to call the trip off. For all the potential tension during that scene, there is one jump scare and no pay off. This sets up the entire attitude of the film, wait thirty minutes and there will be a jump scare. 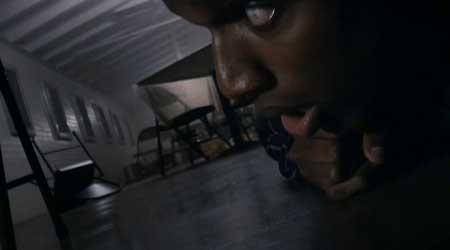 Taking off into the desert, the film then stops at other, classic, Area 51 locations. We briefly see the “White Mailbox”, we see the security signs, and they stop at the Little Ale-Inn where they meet up with Area 51 researcher and conspiracy theorist Glenn Campbell, appearing as himself. All of these things serve to create a believable atmosphere and would have served a better made film well. Instead we are handed information that has been presented before on any number of television programs about Area 51, which were more enjoyable to watch for the absence of ”shakey-vision”. 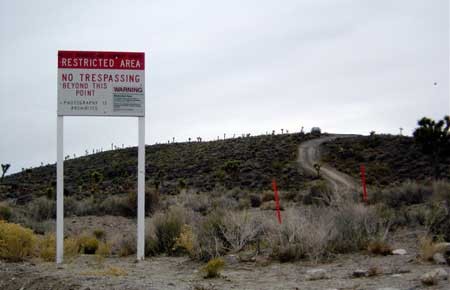 Appropriately, it is 51 minutes in when Reid, Darrin, and Jelena arrive at Area 51. There are a few moments of mild drama along the way, but overall, it looks like a cakewalk expedition that anyone living near a Radio Shack could easily put together. Of course, things are shot to be dark, voices are mere whispers and it is annoyingly hard to overhear dialogue or to see what is going on. Viewers should expect to need to replay several scenes just to hear what is said.

Finally they begin creeping through the base proper. Entering buildings and working their way underground into the “real” base (most of which looks like a fairly generic cubical farm). True to form, about thirty minutes after the first jump scare we are treated to two more in rapid succession. That is the end of any “scares” for the movie at all. Thirty One minutes remain, and they will mostly drag, with moments of tension, and not much else, despite the best attempts of the director.

The trouble with this film is that so much of it is dull that it is easy to become apathetic about the rest. Moments that are meant to be frightening merely raise an eyebrow as they are rapidly left behind and things return to boredom. As everything we the audience have been told about the aliens takes place, we cannot help but merely tick them off like a checklist. There is no shock, there is no surprise, just a list of things we were told to expect all playing out before our eyes.

That isn’t to say that there aren’t some moments of atmosphere, but they are all too little, too late, to save this movie. Honestly, Syfy Channel’s Scare Tactics has done much of this material better, more believably, and in a much more frightening fashion (which isn’t saying much). In the end, they rely on a technique used in so many found footage films, that looks absurd and out of place in a brightly lit, all-white hallway. Interestingly enough, the technique might have been fresh and original if the film had been released upon completion, but since this film was in the can Oren Peli has gone to that well too many times, and has done it better.

The credits finally come and roll silently as if the film itself is unsure what we have just been subjected to. The small “stinger” at the end isn’t worth waiting for, although it does at least explain how the footage was found.

Area 51 is an interesting concept, with mediocre delivery, and a scare factor of zero. It is lazy film making at its worst, and it is easy to understand why the movie sat in the can so long (six years) prior to being released. It was not worth the wait. If you are a fan of Oren Peli, you might enjoy this movie as a curiosity, but it has no redeeming qualities. 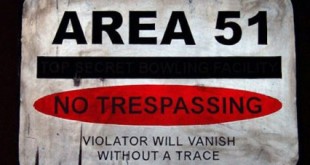