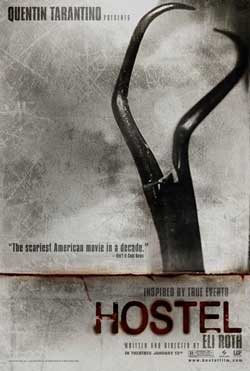 Three backpackers head to a Slovak city that promises to meet their hedonistic expectations, with no idea of the hell that awaits them.

Touting welcome to your worst nightmare, and rightfully so, Hostel is certainly one of the most gruesome films ever created. And, considering that the film is presented by Quentin Tarantino, and written and directed by Eli Roth, does it really surprise?

Paxton (Jay Hernandez) and Josh (Derek Richardson) are two Americans backpacking across Europe; basically having the time of their lives with a befriended Icelander named Oli (Eythor Gudjonsson), who fancies himself the King of Swing. While in Amsterdam, they visit the smoke shops, the red light district and a rave, where they meet Natalya and Svetlana (Barbara Nedeljakova and Jana Kaderabkova), two seemingly hot to trot young women. 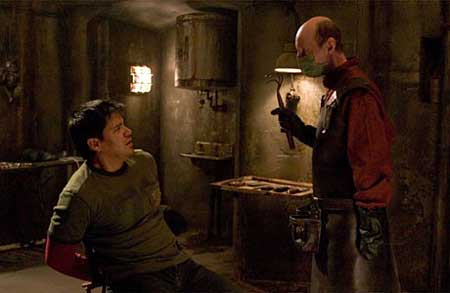 After spending the night together, Oli ends up missing and the two are perplexed when told that he had checked out and went home. Unbelieving, they attempt to contact him by cell to no avail. When Kana (Jennifer Lim), an oriental tourist, receives a cell picture of Oli and her friend standing before a tall smokestack, she shows the frantic friends. Paxton, using the photograph as a guide, tries to hunt for and narrow down where their friend might have gone.

The scene changes to a hooded Josh, peeking through a single hole and chained to a chair. The heavy wooden door opens hooded and an older man with a heavy accent (Jan Vlasak), enters, dressed in a surgical face mask, a rust colored jumpsuit covered with a thick black rubber apron. 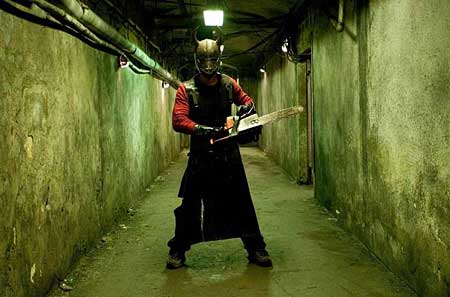 The man pulls off Josh’s hood and Josh begins to plead. The man doesn’t care and goes to a table covered with various gruesome implements, selects a cordless drill and proceeds to drill holes into Josh’s thigh. After a few punctures, the man tosses the drill back onto the table and selects a scalpel. The man waves the scalpel at Josh, explaining that he really wanted to be a surgeon, but couldn’t and holds up his hands to show Josh why…they are chronically shaking.

Josh begs to be let go. The man ponders and then bends down out of the camera’s view. Two slices are heard and Josh yells out. The man unlocks Josh, telling him he is free to go. In one of the most gruesome scenes of the film, Josh stands up and steps forward. His Achilles tendons are graphically portrayed as being severed. He falls down and begins squirming toward the door. But, just as he almost reaches the doorway, the man grabs his legs and yanks him. 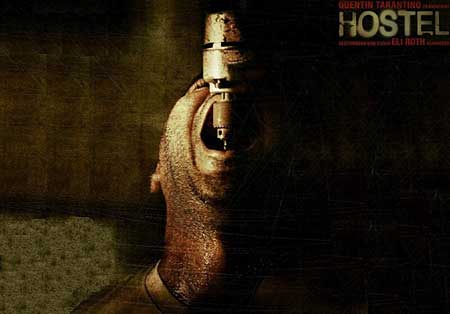 Scene change and Paxton is now being lured by the two women to another night of party, where he is drugged and sick. He tries to find the restroom, but inadvertently locks himself in a storeroom. He is found the following morning and told to leave. He stumbles back to the hotel and finds that his friend Josh gone. He confronts the desk clerk (Milda Jedi Havias) and is told that Josh has checked out. Now he knows something is wrong. He corners Natalya in a tiny bar, who tells him that his friend went to an art show. He then forces her to take him to this art show.

The two take a cab to an old unused factory. Paxton recognizes the smokestack and is on edge. She directs him through a doorway, following him. The inside is dark and decrepit, with old concrete brick walls resembling a medieval castle. There are doorways leading off to the sides of the hall, each having a light outside, some are red and some are white. Now fully on guard and not believing her, he calls her a bitch, to which she retorts “I get a lot of money for you, and that makes you MY bitch.” Paxton walks past a doorway and sees his friend lying prone on the table, his stomach wide apart as the would-be surgeon operates. Paxton is then captured and finds himself strapped in a chair. 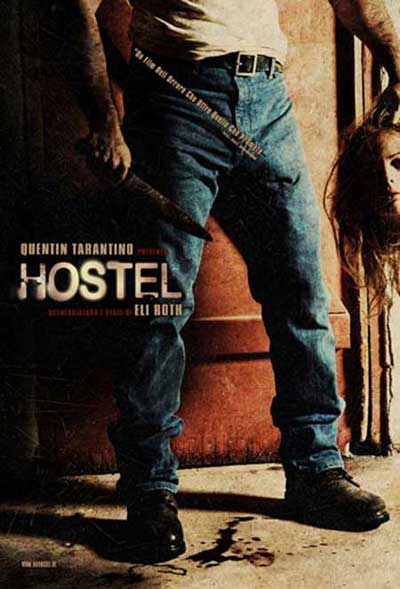 Two men enter the room, one (Petr Janis), dressed as the would-be surgeon had been, and the other, a big burly henchmen wearing black leather. The leather clad man puts a gun to Paxton shoulder and asks him to speak. Paxton speaks in English and the henchman tells the other that he is American. The man nods and the henchman leaves.

The man then looks over the implement filled table and selects a pair of large scissors. He snips them around Paxton’s face, installing fear and horror. Paxton pleads as the man mumbles something in German. Paxton, who happens to speak German, begins to speak in the man’s native tongue. This infuriates the man and he runs off calling for the henchman, who comes in and gags Paxton with a black rubber ball.

Satisfied, the man goes to the table again and picks up something resembling a three-pronged fork and begins striking and sticking the prongs into the Paxton’s leg. The man then goes back to the table and retrieves a set of bolt cutters. In another of the film’s more gruesome scenes, the bolt cutters are shown being placed on Paxton’s toe. There is a snip and Paxton begins to cry, pleading to be let go. 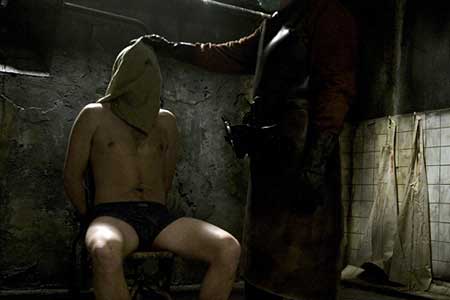 As the man goes to the table for a chainsaw, Paxton, trying desperately to free himself, is wiggling loose the post behind him, to which his handcuffs are attached. The man begins waving the chainsaw about, inadvertently sawing off two of Paxton fingers and cutting the handcuffs loose. Paxton is able to use the post to strike the man, who falls to the floor, the chainsaw grinding deeply into his thigh. But, considering how well guarded the compound is, Paxton scoops up his severed digits, but has no place to run, and he clamors aboard a cart, hiding amidst butchered dead bodies. A hunchbacked man enters and wheels the cart into a basement bound elevator.

Paxton, lying at the bottom of the cart covered with a body, watches as the man chops his friend up. When the man goes into another room, Paxton grabs a large squared head hammer, sneaks up behind the man and hits him in the head. He takes the elevator up.

Finding his way to a dressing room, he explores the lockers and finds a suit, tie and black gloves (which he uses to cover and hide the missing fingers). In the pocket of the suit he finds a business card that says Elite Hunting. He flips the card over. There is a handwritten list indicating $5000 for Russian, $10,000 for European, and $25,000 for American, and realizes that this place is a demented specialty business. Just then, an excited client (Rick Hoffman), dressed in the gruesome apron attire and waving a chrome plated pistol, enters the room and sees Paxton. The two converse with the man asking how it was? Paxton replies solemnly…good. The man says for the price he’s paying it better be, and that they have something very special arranged for him. The man rolls up his sleeve, showing off the special “bloodhound” tattoo, a requirement for all patrons to receive, and asks to see Paxton’s. Paxton is off the hook when the man is summoned, it is his turn. As the man leaves, he tosses the gun onto a pile of bloody rags. Paxton takes the gun and finds a way out of the building. But, while standing outside and on the verge of escaping, he hears the Kana screaming and goes back in to save her. 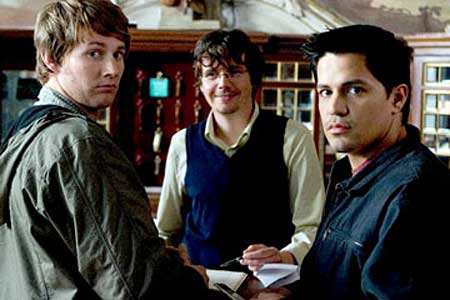 He finds her, face being seared with a blowtorch, her eyeball dangling completely out of its socket on her cheek. Her tormentor, the man Paxton met in the locker room, is surprised to see him and tells Paxton to get his own. Paxton shoots the man in the forehead. But, before they can run, he has to deal with her loose eyeball. He takes a pair of scissors, hesitantly snips it free and white liquid bubbles out from the burnt socket.

The two make it outside, where they take a car and are chased by the henchmen. Along the way he sees Natalya and Svetlana and mows them down. He comes upon a roadblock and notices the local police captain speaking with the henchmen and now knows that the whole town has a part in this horrible place. The two leave the car and ramble on foot through a forest to a train station filled with more awaiting henchmen.

Paxton hides behind large wooden crates and waves for Kana to join him. As she’s going to him, she sees her terribly disfigured face in a reflection and becomes distraught. Melancholic, she trudges across the platform and throws herself in front of a fast moving train. This draws the attention of the henchmen, allowing Paxton to escape on a train.

On the train ride to freedom, Paxton sees the would-be surgeon that killed his friend and follows him off the next stop and into the restroom. While the man is sitting on the commode, Paxton, in the next stall, tosses the business card under the partition. The man, completely surprised, reaches down for the card. Paxton latches hold of the man’s hand and proceeds to slice off to the man’s fingers. He then enters the man’s stall and cuts his throat, leaving him for dead with his face in the toilet.

Dark and demented, with a soundtrack that compliments every frame; Hostel is a film that will certainly evoke cringes and chills. And, while there were three Hostel films made, all gruesome and violent in their own right, the original, at least to me, remains the most macabre. 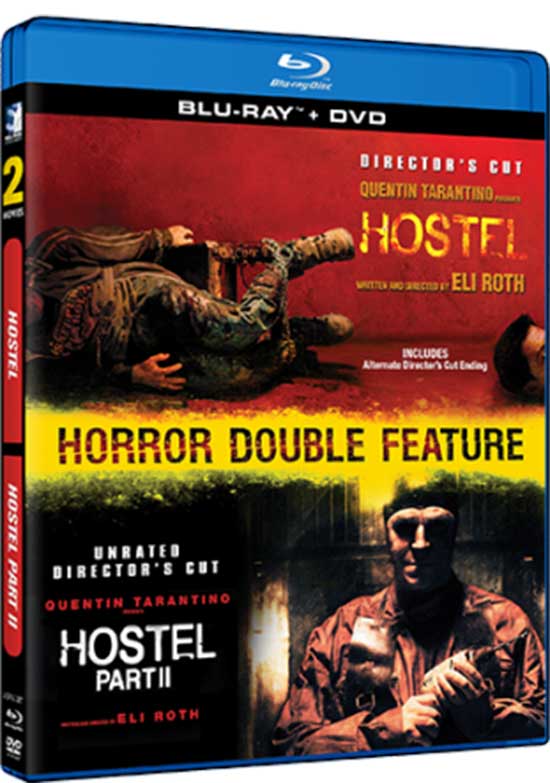