Stripper based horror films have “not” been in abundance over the years. In fact just trying to come up with a top 10 list was an article project that took longer than expected. However as you’ll note in the first few choices, there have been some great and worthy moments within the genre that will always receive mention. Salma Hayek gets my #1 vote if you ask me for most memorable an sexiest of the bunch. Trailing behind are some great contributions from actresses Rose McGowan and Linnea Quigley. You’ll find other worthy entries that trickle off into the whole “Strippers vs…” themes that have become more common these days

I do invite readers to comment on a favorite that we may have overlooked (we’ll of course add it, if it checks out). For filmmakers, you may want to take note of the “lack of” in this area (if purely for the sake of making “horror stripper” lists). I’m not that sure though that we really need too many stripper films crowding the horror genre opting for the preference of films like “Dusk to Dawn”” and “Planet Terror” released upon us.

(not in order of ranking) 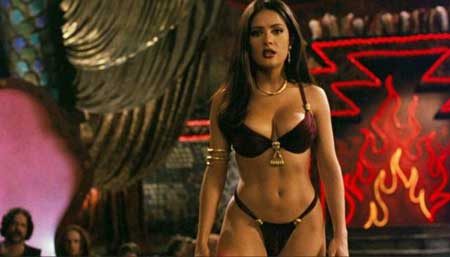 02- Planet Terror (2007)
It may be a zombie movie but the intro featuring Rose McGowan as “Cherry Darling” doing her best go-go dancer routine is one not to be missed. Shot in a retro 70’s style, this memorable intro scene adds just the right amount of style and sexiness needed to light this film up. Definitely a highlight moment for actress Rose McGowan. 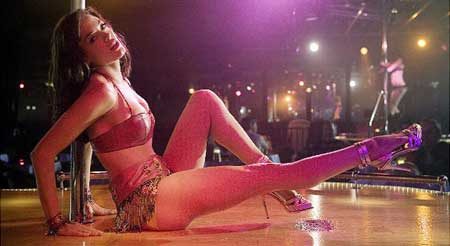 03- Return of The Living Dead (1985)
When Linnea Quigley as “Trash” does her full nude party strip dance all eyes are not only focused on her but tend to forget that she’s about to be eaten alive (aka: old men, her nightmare fantasy) This single moment undoubtedly help put the actress farther on the map on being America’s premier scream queen. Easily one of the hottest moments in horror genre history and done perfectly for maximum appeal. Linnea is perfect in this scene (leg warmers and all!) 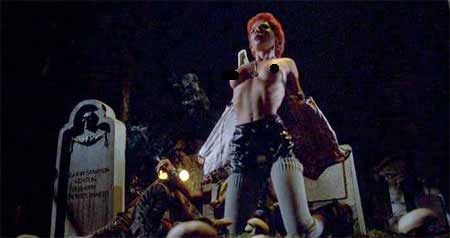 04- Sucker Punch (2011)
Just for the record, we are full aware that “SuckerPunch” was mostly an action-fantasy-thriller. It did have a few Nazi zombie moments though which was enough leverage to pull it up on this list. Besides I couldn’t see “Strippers vs. Werewolves” being on here and leaving “SuckerPunch” off. I think most will agree that “Suckerpunch” had some great stripper dancing moments, especially when coming from lead “BabyDoll” Emily Browning. This was a fun movie that many really enjoyed. Again, primarily not a horror film but good enough!

05- Zombie Strippers (2008)
It’s more zombie strippers than you can handle. the reigning champ of horror films with stripper “Zombie Strippers” ….This film may qualify as the truest form of horror and stripping from the bunch with plenty of lovely actresses to make the watch a pleasant one. It may be one of the defining films that have most guys overlooking the zombie transformation just to get a glimpse of the sexy figures coming their way. This film is alot of fun and deserves to be on the list, hands down.

06- The Gore Gore Girls (1972)
An old gore classic by Herschell Gordon Lewis that takes on the familiar theme of strippers being murdered by an unknown serial killer that takes kills to the next level. This film holds some pretty nasty bits while also managing to cleverly add the 70’s exploitation aspect of adding strippers to its mix. This controversial film for its time was part of a series of similar films from Herschell that made use of sex and gore a pretty effectively . The Gore Gore Girls marks one on the earliest of this bunch paving the way for others to follow. 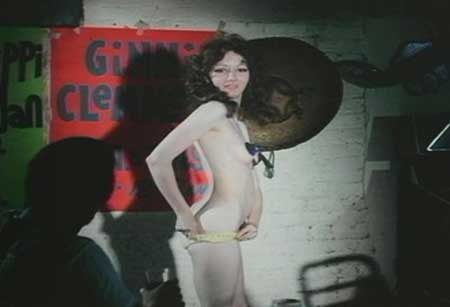 07- Vamp (1986)
Let’s not forget the memorable 1986 film that features Grace Jones doing a worthy Vampire stripper acting performance. The premise here was simple, a couple of college students head out to find some strippers for their fraternity. Along the way, they run into all sorts of trouble including a vampire staff hiding out in a bar called “After Dark Club”. This comedy horror delivers some great moments that places Jones as the films highlight in her performance as Queen Katrina. In some ways, you could say this film set the flavor for the later “Dusk to Dawn (1996)” production. A quirky, but fun classic! 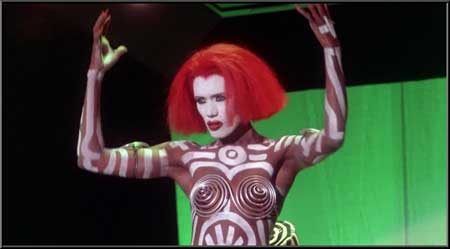 08- I Know Who Killed Me’ (2007)
A piano teacher seeking revenge upon unmotivated students takes a back seat to the highlight of actress Lindsay Lohan playing a stripper in this 2007 horror thriller. The film may have done little for the genre, but it did manage to market that 1 aspect. By all accounts we expect this entry to get replaced down the road with a film more suitable. However for the moment it makes the cut. 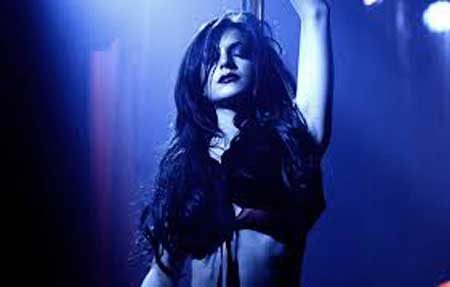 09- Strippers vs. Werewolves (2012)
Yep, they got strippers…check. They got werewolves...check. Sort of an odd entry with dog like werewolves and a cast of hot smoking ladies. The film centers around a local strip club that is under attack by a mafia like organization comprised of werewolves. It’s a bit cheeky and a bit cliqued but it certainly focuses it base on these ladies. Worth a peek when you have an open schedule available. 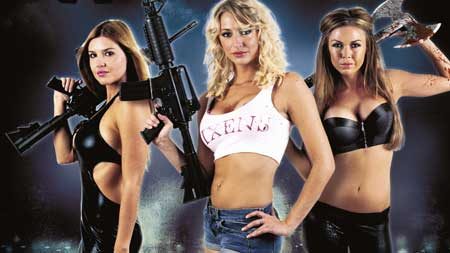 10- Stripperland (2011)
A pretty funny film that also feels like deja vu. Those who have seen it will recognize the “Zombieland” patterns this film borrowed into to its own shell. Of course it has a different story , one of which is that the dead have come back to life as strippers. Or let me try again, strippers, female strippers have turned into zombies. no that’s not it….zombie strippers are killing everyone. Well i suppose its not important, though it is a decent film and has some humor going on. There are certainly alto of strippers in this film. Though for the record, not as hot as the strippers in  Zombie Strippers (2008)…but we of course know the story there. 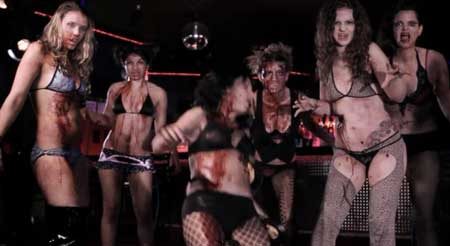 A killer is targeting New York City strippers, and world-weary policeman Al Wheeler (Billy Dee Williams) confronts sleazes Matt Rossi (Tom Berenger) and Nicky Parenzo (Jack Scalia), who have a hand in the local adult entertainment scene. Wheeler wants the duo to dig up some clues and threatens to find find a reason to put them behind bars. But, as Matt watches his stripper ex-lover, Loretta (Melanie Griffith), cope with the murders through drug abuse, he decides to hunt down the killer himself. 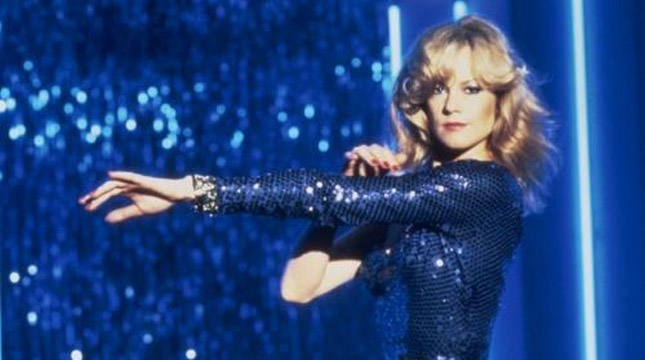 A small town strip club owner named Blue Jean, must defend her bar, her strippers and her life when several patrons become increasingly violent and wreak havoc on the final closing night. 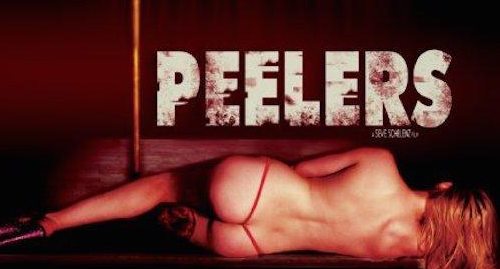 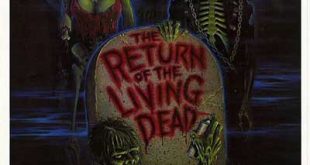 Sequels and Remakes: Return of the Living Dead