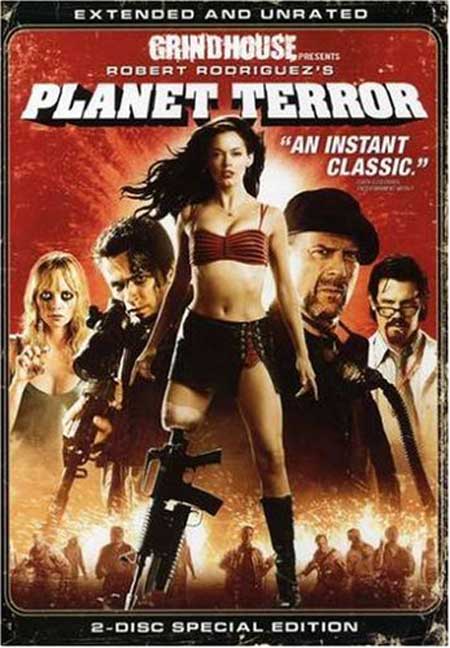 After an experimental bio-weapon is released, turning thousands into zombie-like creatures, it’s up to a rag-tag group of survivors to stop the infected and those behind its release.

Somehow reviewing this great piece of work slipped under our radar. Though the film itself (bearing some discussion) was still a chance for me to re-watch this film again with fresh eyes. Originally, I had the pleasure of attending the official theatre release of “Grindhouse” which included not one, but 2 films and several fictional trailers designed to enhance the whole retro grind house experience. The idea? To recreate a classic grind house double feature as it might have been presented back in the 70’s focusing on the classic exploitation styles of horror and action, hot women, cars and …….what not.

The release itself fell under expectation (most likely due to the rather long movie watching session need to complete its over 3 hr presentation). The project itself was the brainchild of dual directors Robert Rodriguez and Quentin Tarantino with Robert Rodriguez directing this first half of “Grindhouse” under the movie title of “Planet Terror“. 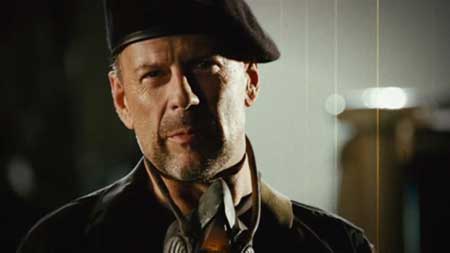 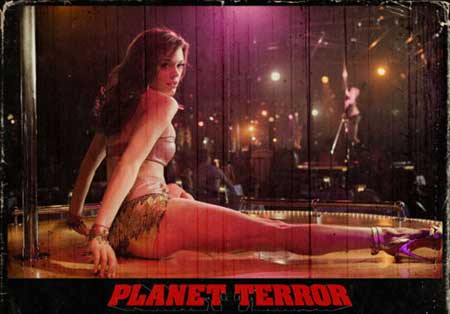 “Planet Terror” was created, edited, and presented in a style that you might have seen “back in the day” using old school film-making and grunge techniques to dirty up the look and style. Color toning provided that additional flavor to round out the look and feel of Planet Terror resulting in a rather unique skip down memory lane.

Planet Terror begins its first act with a memorable Rose McGowan (who plays the role of Cherry Darling) go-go performance. Rose manages to cement one of the few inspiring and sexiest go-go performance put to screen as the camera pans around her back and forth. If ever there was a memorable McGowan role to remember, it is in her performance in the Grindhouse films (who appears in not one but both movies). In short, Rose never looked better, a motivation for the bluray purchase itself. 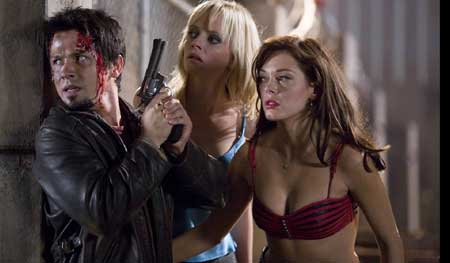 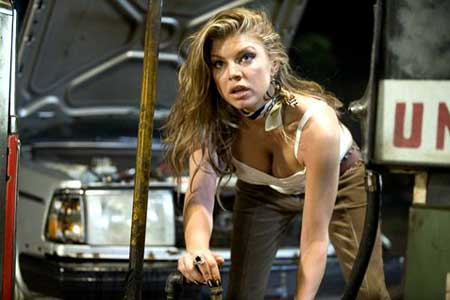 Moving forward, a batch of rebels release a zombie-making toxin into the atmosphere instantly turning those nearby to raving melting monstrous cretins. The zombies proceed to terrorize the town moving their way thru one section and into the other as they eat, tear, and destroy that which they come in contact with.

Cherry who just quit her night job makes way to a local B&Q joint only to meet up with an old fling, el Wray. Though things just get worse and worse with Cherry’s leg being bitten off by a group of zombies. Too much information? Well, it doesn’t take much to realize from the numerous retro posters issued that Rose McGowan is featured thru a portion of the film as a 1-legged machine-gunned-attached vixen oozing sex appeal and raw action-star gitz (also acting as this film’s prime marketing attraction). The movie gets even better with an impressive dynamic editing flair, a cool exchange of inner doctor (Josh Brolin) and nurse (Marley Shelton) drama, some tough twin baby sitters action, toxic creatures, melting heads, a riled up police force featuring Michael Biehn, and just all and all out local war of chaos incarnate unleashed. 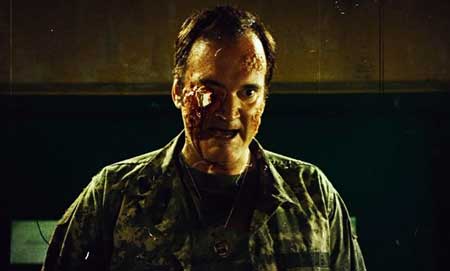 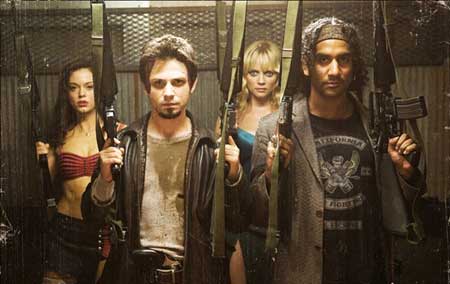 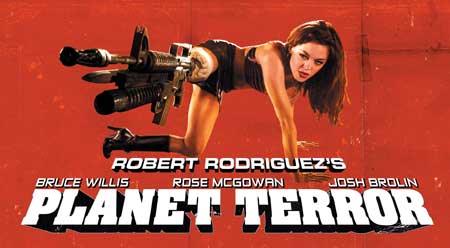 You could call this a “zombie film”, but…. my takeaway was that “Planet Terror” is a grindhouse exploitation tribute experiment that “also” happens to have oozing undead-like things in it. The film soundtrack is excellent and the segments blend seamlessly thanks to the cohort influence of Quentin Tarantino on set.

“Planet Terror” contains several moments that were surely inspired by the works of Dario Argento, Romero,  Lucio Fulci, and  70’d blaxploitation movies often presenting shots that almost appears as a tribute to that era.

What works best here is that the script is smartly written to compliment the fine editing and slick action sequences. All works hand in hand positioned from the perspective of a grindhouse fan (Robert Rodriguez) who obviously made this a work of passion. You get the sense that all had a great time making this one with it simply looking gritty and authentic. The awesome cast of great acting talents makes for a non-stop interaction of inspiring characters. 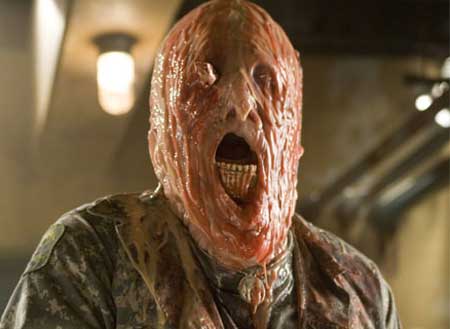 The film received a better reception released onto DVD than its theatre run, however for obvious reasons audiences have a much shorter attention span than what this project intended for them. The film is now on bluray with both films included to enjoy (at your leisure)

I loved this piece for many reasons: the cinematography, soundtrack, acting, effects and just a general cool overall packaging to the whole she-bang. If you love your 70’s roots, then this one will feel right at home with your interest in the films of that era.