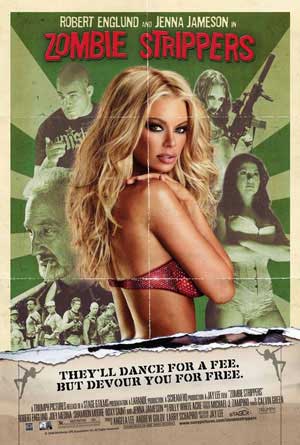 A deadly government-controlled virus strikes a small Nebraska strip club, where the head dancer is quickly infected and transformed into a flesh-eating zombie — and becomes an instant hit with the customers. To be or not to be a zombie: That is the question facing the remaining jealous strippers in this outrageous horror comedy, starring slasher icon Robert Englund (best known as Freddy Krueger) and adult-entertainment icon Jenna Jameson.

Its, hot, its sexy, it vulgar, vicious and one hellva crazy ass film. Yep you got it – Zombie strippers! (insert heavy metal rumble)

This is no simple cheesy camp-filled film. It’s got balls and the hottest mix of undead you’ll ever see. The film basically goes thru 3 stages. The first being the recon team training and there taking out the undead. The 2nd is downright sexy stripping and then its all out head exploding zombie play for the rest of the film.

As it begins, we are thrown into the local strip club where one of the recon zombies has managed to sneak into. Then its all out and out stripping. One hot lady after the next. This is lead by the beautiful Jenna Jamison, the star stripper, and mix of equally alluring gals. As you guessed it, the zombie dude takes chunk out of Jenna’s jugular and the Zombie stripping action is on!

As these girls are zombitized, they find new energy to go on stage. Much to the crowds delight, the zombie girls are now faster, more agile and much more energetic on stage. This showmanship drives home with the locals who cheer them on even more. The owner gets richer and the Zombies get popular. Being overshadowed, the regulars soon want that extra lack of life to enhance there performances as well. The undead look catches on and before you know it the zombie strippers are born. Of course no zombie film is without its mix of head exploding, leg ripping, arm eating, crotch muching round of chaos. They FX are incredible and a plenty. In one scene, the stripper rips the guy’s head from jaw to head like a can’taloupe, while another victim gets his melon peeled back like a beer tab. You got to see it first hand.

Never has there been such a mix of disgusting that was also incredibly sexy at the same time. Most of the females stay pretty topless through out even as they are decaying and falling apart. There’s alot of camp in this film but it works like a charm. Great performances are given by actors Jenna Jameson, Robert Englund, Roxy Saint & Shamron Moore as they escalate in intensity. Jenna plays her role without flaw and proves to be an exceptable horror movie actress. Robert Englund an onscreen favorite with horror fans, has really presented a very comedic personality in his latest films this year. Zombie strippers is no exception. His ability to portray the off-kilter crazy man is a delight as always.

This film is a some of the best horror camp I’ve seen in while. It’s production is solid and its fx work is amazing. The DVD goes more into detail on the work involved and it really is the star of this movie. The way the girls transform over time, the props and the grand finales are top notch all around. Also special mention goes out to Laura Bach, one of our resident Vamps who plays a really solid hard nosed military vixen who kicks zombie ass like no body’s business.

This is a great film that is both a homage to 80s zombie films and modern day ranch. I feel it also stands on its own a truly original piece that will most likely inspire films of similiar direction. Great ride all around!