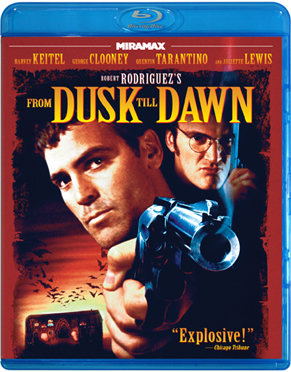 “Two fugitive brothers at gunpoint get an ex-minister and his two children to take them across the border into Mexico. They drive to a Mexican biker bar to rendezvous with other crooks. While at the bar, a few unusual things happen.” (courtesy IMDB)

On the lam from the law, ruthless desperadoes Seth and Richie Gecko (George Clooney and Quentin Tarantino) coerce an ex-preacher (Harvey Keitel) and his kids (Juliette Lewis and Ernest Liu) to smuggle them over the Mexican border where sanctuary awaits. Holing-up for the night at The Titty Twister, a sleazy stripperama ‘for bikers and truckers only’, the group are shocked to discover the barely-clad babes are more than willing to suck – blood, that is!

Having chilled-out the crime thriller with his own brand of conceited cool, Quentin Tarantino’s term as a video store geek hit pay-dirt with his ebullient (and typically offensive) screenplay for From Dusk Till Dawn (1996), a pastiche of VHS schlockers like The Evil Dead (1981) and Vamp (1986), with the polished Panavision of Sam Peckinpah’s The Wild Bunch (1969) and The Getaway (1972). Joining forces with energetic filmmaker Robert Rodriguez, fresh from El Mariachi (1992) and Desperado (1995), the pair have fashioned an affectionately trashy, frequently hilarious and consistently gob-smacking love letter to the halcyon days of Grindhouse drive-in theatre, when tits and terror ruled!

Summarily exploiting, lampooning and re-inventing all the requisite ingredients of the vampire genre, from the bullet-hole sunbeams of Near Dark (1987) to the holy water pistols of The Lost Boys (1987), this thoroughly mean-spirited mongrel of gangster-thriller, road-movie and blood-sucking black comedy comes complete with a pedigree cast.

George Clooney is right near the beginning of his brilliant movie career, making the seamless transition from E.R. medic to hardened thug. George turns on the smoldering charisma in his first leading role, and an instant star is born. Yes, George appeared in such Hollywood dreck like Batman And Robin (1997) and Ocean’s Thirteen (2007), but then he takes all that lovely money and spends it on producing his own superior films and supporting promising new filmmakers. While Quentin Tarantino is convincingly creepy as the drooling sex fiend Richie (are you sure he’s acting?), it’s a shamelessly self-indulgent performance that dictates he’s better off behind the camera for the rest of his movie career.

Unapologetically outrageous, overwhelmingly over-the-top, and an absolute hoot to boot, this post-drive-in salute to salsa splatter is pure B-movie heaven. The DVD I saw was a collector’s edition fully loaded with more extras than the Titty Twister has titties, making it an absolute must-have for fans. A thirteen-minute featurette called Hollywood Goes To Hell is a jokey, backslapping session and profile on versatile director Robert Rodriguez, including testimonials from Steve Buschemi and (of all people) Jennifer Beals. It also feeds the already gorged ego of Quentin Tarantino, whose motormouth audio commentary with Rodriguez is a further highlight.

The Art Of Making The Movie features behind-the-scenes footage of four sequences. The Opening, The Hostage, Titty Twister and Battle Three, all with Robert Rodriguez commentary. On The Set is collection of assorted clips and interesting anecdotes. For instance, Rodriguez reveals how an explosion burned down the Titty Twister set on the first day of shooting. But the real gold here is a five-minute collection of deleted scenes and alternate takes with optional commentary from Rodriguez and effects supervisor Greg Nicotero. Get ready to revel in some wild and crazy creature effects that didn’t make the final cut, together with lots of miscellaneous biting and bloodletting and additional gore effects trimmed to appease the ratings board. Look out for an outrageous tribute to John Carpenter’s The Thing (1982) and some additional fun involving Selma Hayek: She doesn’t give head – she takes it! And it’s with that image in mind that I bid you a fond farewell till next time when I have the opportunity to inflict upon you the tortures of the damned from that dark, bottomless pit known as Hollywood for…Horror News! Toodles!