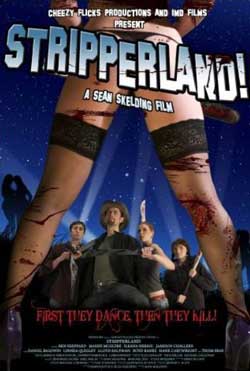 In this parody of “Zombieland,” we follow a group of survivors trying to stay alive after the zombie apocalypse takes place. These zombies are a little different though, as they are all female strippers who enjoy tearing people apart and devouring them (when they’re not busy dancing to Hip Hop music and trying to earn tips). Zombies have never looked so good.

Film parodies can either be very good or very bad. There really isn’t a whole lot of in between in my opinion. “Stripperland” is an example of one of the very good ones. Generally I don’t really get into horror-comedies, and with the exception of the films made by Troma, Speed Freak, and even some of the Brain Dead titles I usually avoid watching these types of movies as most of them are just painfully bad and unfunny. The biggest majority of them rely on d*ck and fart jokes and are just so silly they are obnoxious (yes, I am talking about the “Scary Movie” series as well as those horrible, dreadful films such as “Disaster Movie,” Epic Movie,” etc). I am happy to say that “Stripperland” doesn’t rely on d*ck and fart jokes, it isn’t silly or obnoxious, and for the most part the humor works. It also has a decent script and I enjoyed seeing cameos from some legends of the genre such as Lloyd Kaufman (who rules as usual) and Linnea Quigley.

There are a lot of things to really like about this movie. I liked that for the most part It stays pretty close to the action that takes place in “Zombieland.” We have characters named after the areas that they are from, the main character (who is given the name “Idaho” even though he isn’t from there) has a list of rules to follow in order to survive being eaten, the character Frisco (who is based on Woody Harrelson’s character) is a badass who enjoys shooting zombies and trying to find baked goods (I love his line about how you can find Twinkies anywhere), our heroes find themselves at a famous actor’s mansion at one point and accidentally kill him because he is dressed like a zombie, etc. It does have some original things going on as well, as they end up battling a mad scientist and find themselves at a mall briefly (in a pretty cool nod to “Dawn of the Dead”), Overall there is enough here to make fans and non-fans of “Zombieland” both happy.

There is plenty of over the top gore and violence here to keep gorehounds happy as well (though I am a little disappointed that they used CGI blood at certain points. It isn’t that hard to mix up a batch of realistic-looking fake blood, guys). We have zombies munching on many people (including a scene pretty much taken out of “Day of the Dead” where one poor soul is slowly eaten by a slew of zombies), zombies being taken out in a variety of ways (such as being shot, beaten with ball bats, run over by vehicles, and hacked to pieces with machetes and other weapons), and tons of blood and severed body parts. If seeing blood and guts is your thing then you won’t be let down by this movie.

Most importantly, “Stripperland” is actually funny at times, which is crucial since it is a comedy first and foremost. I just liked the light tone of the movie and it is obvious that the filmmakers have a great sense of humor. There are many funny scenes here (the one with Kaufman comes to mind, as well as the bit where the contents of the briefcase that Idaho’s father gave him are revealed, etc) and they are genuinely funny without having to be obscene, obnoxious, or just plain silly. I wasn’t rolling around on the floor holding my sides I was laughing so hard, but I did get a pretty good chuckle every once in a while as I was watching it.

I had a pretty good time with “Stripperland.” I went into it not really expecting a lot but was surprised by how much I ended up liking it. There are a lot of things to really enjoy about it and I think most viewers would agree. If you are not in the mood for a serious horror film and want something a little more light then check this movie out. You won’t be let down. 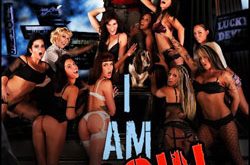