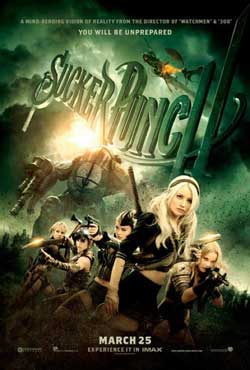 A young girl is institutionalized by her wicked stepfather. Retreating to an alternative reality as a coping strategy, she envisions a plan which will help her & her friends escape from the facility.

The Black Saint has a lot of respect for Zack Snyder, I really do. First , he remakes a genre standard “Dawn Of The Dead” & turns it into a winner. Then He goes & turns Frank Miller’s “300” into what was the best film The Saint sw the year it was released. And then, He goes & makes a good film out of the supposedly unfilmable “Watchmen”. He stumbled a bit on that “Guardians Of Ga’Hoole” movie, but nobody ‘s perfect & f*ck all of you guys, it looked great. So when I saw the trailer for “Sucker Punch” I was so excited! It looked like an amazing piece of cinema & everyone I know was pumped to see it..even my 9 yr. old son was ready to go see it & I was ready to take him. But I thought I should see it first for myself, just in case there was something I thought he shouldn’t see. But Zack has created in my eyes..his first outright failure. “Sucker Punch” is aptly named indeed…

“Sucker Punch” tells the story of Baby Doll (Emily Browning) who is committed to a insane asylum under false circumstances brought up by her evil stepfather. He attempted to molest her & when she resisted, he went after her younger sister. She got a gun & while aiming at him, accidentally shot her sister instead & killed her. The stepfather claimed that she lost her mind upon the death of her mother a few days earlier. As she is being processed at the asylum, she overhears a deal being struck between her stepfather & the head of the asylum. She is to be lobotomized in 5 days. Making it easier for her stepfather to get access to her late mothers fortune. So far…so good. when the film is taking place is never stated but it seems to be in the 40’s/50’s no later than that so lobotomies were performed with a steel needle & a hammer nailed into your brain through your eyesocket. Not too cool. So she needs to escape , but how?

In the asylum, Dr Vera Gorski (Carla Cugino with a bad accent) teaches the girls to dance. they dance because the director of the asylum has men come over & be entertained by the ladies for a fee. Baby Doll is too shy to dance in front of others but the good Dr. tells her to look to her imagination and stay there while she’s dancing. Baby Doll realizes that that is the way to get out of the predicament she’s in. So she starts to sway slowly back & forth when suddenly she’s in the middle of a snow covered courtyard (Very reminiscent to “Kill Bill 2”). There is a Dojo there & she enters it to find “The Wise Man” (Scott Glenn). He tells her she can escape her predicament if she finds five things: A map, Fire, knife & a key. The fifth object is unknown to him but he tells her “You will know what it is when you see it”. So with that information she turns to leave only to find three 10 foot tall demonic Samurai waiting for her outside. Luckily, the wise man gives her a sword & a gun to handle her business. This is where the film shines, in the battle sequences (of which there are many). In her imagination, Baby Doll is a bad ass bitch & can jump around & kick like Bruce Lee’s lost daughter. She takes out the Samurai one at a time in a most entertaining fashion and then when she’s done she comes out of the suppposed trance she was in while she was dancing. She opens her eyes to applause from everyone claiming they’ve never seen dancing like that before. But she’s still in the asylum & time is running short.

She enlists the help of four others in her quest to find the objects, which are all in the asylum. All of them have nicknames for each other as well. There are the sisters Sweet Pea & Rocket (Abbie Cornish/Jena Malone), Blondie (former Disney ingénue Vanessa Hudgens) & Amber (Jamie Chung). Together the five of them devise a plan to get the objects, but they can only do this when Baby Doll is dancing. So every day, when Baby Doll dances she imagines the five of them wearing short skirts, fishnet stockings & partially open shirts. All of them armed to the teeth & all of them very handy with their weapons & hand to hand fighting. Which comprises the bulk of the film.

Each of baby Doll’s imaginings takes them to a different place with a different menace to overcome to get the particular piece they’re looking for. First it’s the map, which takes them to a WW2 situation except the Germans are clockwork zombies who are already dead. For the fire, they have to go to a castle under siege by what look like Orcs & with a fire breathing dragon & it’s offspring inside the castle. The Key is in a speeding train protected by an army of robots & so on ..The obvious conceit is that it’s sort of like a video game with a new challenge for every level they conquer. At first I thought it was pretty cool, but then I realized that these were most of the scenes I’d already seen in the ads for the f*cking movie! So where’s the plot? All I’m getting is action scene after action scene. Pretty to look at for sure, but eventually & unbelievably…boring after awhile. Plus, the posters tell us “You Will Not Be Prepared”. Of course we were, at least if you’d seen “Kill Bill 2”, “Dead Snow” (or any Nazi zombie movie actually) & any of the “Lord Of The Ring” series or “Iron Man 2” or even “Dragonslayer” or “Reign Of fire” you’d be prepared. Since the film borrows imagery rather liberally from all of them. While all of the action setpieces are well mounted & expertly designed & choreographed, they grow repetitious very quickly. This is not what I expected from you Zack…I expected greatness!! What I got were gussied up remakes of scenes from other & I daresay, better pictures.

The actors all do their jobs convincingly & all of the young actresses are to be commended for what must’ve been a very difficult film to make. They’re shooting, punching, kicking & flying(!) throughout most of the running time of the film so I know when it was done they had some pretty fair bruises to deal with. And as I said earlier, the film is beautiful to look at. The dull grey of the first section of the film is straight out of Burtonland. And the fiery red & orange hues of the battle scenes were Argento-esque. But they all add up to eye candy & nothing more. The plot is thin & as I said…boring. It’s a series of “We need this, so we’ll do this” scenes that seem to go on ad-nauseam. Brutally disappointing.

And the mysterious fifth part of the puzzle to go along with the map, fire, knife & Key? Let’s just say that I figured it out at the halfway point of the movie & you should too. It’s fairly obvious that Snyder (who wrote the script with Steve Shibuya) was going for a “Female Empowerment” kind of message here, but it’s so heavy handed & obvious that it ends up feeling trite & warmed over from the 70’s. Scott Glenn gets the worst of it. Appearing at the beginning of every mission he always has some words of wisdom to impart to the girls before they embark on their quest. His words are snarky, corny & even he sounds like he doesn’t believe it in his recital of them. I almost thought I saw him smirk at one point during a serious scene…almost.

The Black Saint is giving “Sucker Punch” 2 shrouds for it’s dazzling visuals. Sexy young girls fighting giant dragons, zombie Nazi’s, robots & orcs are cool to look at. But if there isn’t a compelling story to tie it to…then you’re just watching a very expensive video game. And I can do that at home here in the mausoleum (I never lose to anyone either). So if what I just described makes your nature rise just a bit, then by all means go see this movie. But if you care about more than just explosive special effects & want a little meat on the bone to nibble on, then skip “Sucker Punch” completely. A major disappointment.