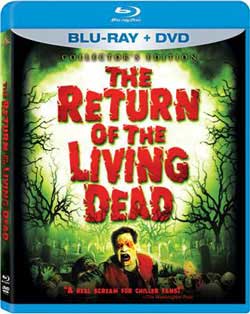 When a bumbling pair of employees at a medical supply warehouse accidentally release a deadly gas into the air, the vapors cause the dead to re-animate as they go on a rampage through Louisville, Kentucky seeking their favorite food, brains.

“Return of the Living Dead” easily stands as one of the greatest zombie comedy films of all time. Way before there was “Shaun of The Dead“, way before there was “Zombieland” there was this little runaway hit of a film that inspired an entire franchise run of sequels in its name. Still when zombie films were scaring folks and filling their heads with nightmarish images of flesh eating and the dead getting up from graves, ROTLD did so with its own style and comedic approach. 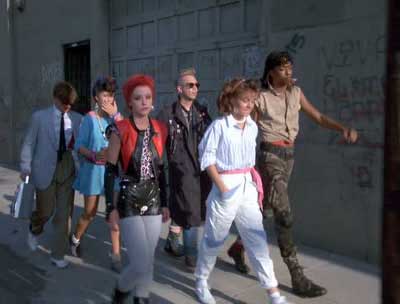 Freddy takes on a new job at a medical supplies part store called “Uneeda”. The warehouse contains all kinds of weird medical aids and freaky experimental cadaver items. Half dogs, skeletons, frozen humans and prosthetics..its quite a collection of dismal items.

It’s his first day at work and Frank his boss wants to make sure he shows him the ropes which include a few chemical waste barrels in the basement. Though these barrels are no minor waste containers, they contain frozen corpses that the government have misplaced laying in the warehouse basement for the last 14 years. Frank assures him that they have nothing  to worry about as he haphazardly hits the container causing a chemical leak within the store. When they awake from the gases, they discover that the fumes have released a toxic fume that resurrects dead parts and corpses. Meanwhile Freddy’s friends, a gang of punk rockers, party girls and young deviants decide to take the party to the local cemetery while they wait for Freddy to get off work. 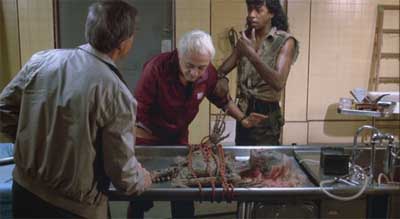 One thing leads to another and unknowingly Freddy, Frank, Burt and Ernie release more fumes into the atmosphere as they try and burn off all the re-animated body parts. Frank and Freddy along with is boss and the local mortician begin to worry that they released something much bigger than anticipated. The graveyard comes alive and the rest is history.

The film itself is almost iconic with its “brains” slogan and its quirky rhythm of a film. The zombies are one of kind combing both camp and gory savagery to a beat that most likely inspired the later video “Thriller”.

One of the unique approaches “The Return of the Living Dead”  takes is by breaking alot of the “zombie” rules that we’ve come to know. Zombies chase, some talk, shots to the brain are ineffective and body parts are able to animate on there own without being connected to the central core. Not only that ,but a few of the “Night of the Living dead” scenarios are combined into the story making it quite a mixture of old ideas with new. 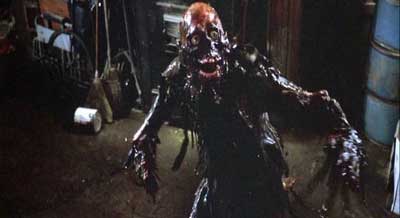 As much as I like Linnea Quigley’s work in countless low budget horror productions, I still believe this  to be one of her top appearances (and hottest for that matter) as the spiky haired punk rock – leg warmer wearing “Trash” who’s nude appearance on top of a gravestone is worth the price of admission alone. Yes it was1985 and horror had its own style of genre going on at the time that wavered between campy, horrific, playful and influenced by a MTV style generation that were used to seeing entertaining music videos as a norm. This film hit at the right time really falling in line with a hybrid of a film that combines sort of a “Class of 1984″ and Dawn of the Dead” approach. It featured a pretty savvy soundtrack that echoed the words “Do ya wanna party?”

ROTLD contains plenty of 80s gore and still manages to do it all n a fun to watch way. Give yourself a treat ad spend a little time with this zombie classic.