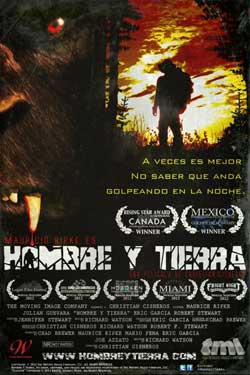 Mauro Bosque explores some of the most dangerous places in the world and sharing those adventures on his Internet reality show, HOMBRE Y TIERRA. In January of 2005 he sought out to explore the dense forests of Belize to search for a series of legendary caves which he believes were once home to a clan of historic Mayan warriors. While on that excursion, he disappeared without a trace. What happened during that three day hike has remained a mystery until the recent discovery of classified footage stolen from a Belezian government office.

Much to my dismay “Hombre Y Tierra” is another one of of the recent glut of found footage movies that have begun to annoy me to no end. Yet audiences still pay good money to sit in a darkened theater and hope that there’s going to be something onscreen that’ll scare them. There have been some really good ones (Paranormal Activity 1-3), some decent ones (Chernobyl Diaries) & some god awful ones (Apollo 18, V/H/S) and I have had to sit through them all. So where does director Christian Cisneros’ film sit on my list? I undertook an exploration of my own to find out….

02:30PM: I’ve prepared my usual supply of rations as I sit down to watch “Hombre Y Tierra”, a film I know nothing about. I have some Raspberry M & M’s, sweet tea & a bag of salt & vinegar potato chips. I’ve propped myself up with some comfy pillows and I proceed to start the film. Once again I know nothing of this film and I feel rather anxious as it begins… 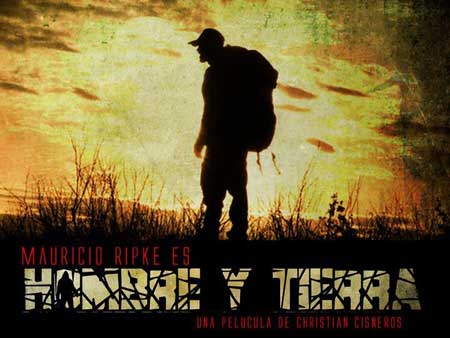 02:33PM: Oopsie! I forgot to go to the bathroom before the movie starts. I hate having to get up in the middle of the movie. I mutter under my breath as I make a quick pit stop.

02:38: Ahhh! Now to get to business. The film opens with a description of what I’m about to see: “In 2005 the video production crew of a popular Colombian web series disappeared whil shooting an episode in the forest lowlands of Belize…and never returned”.

This sounds like every other found footage film I’ve ever seen already and I’m only fifteen seconds into it. I see that my resolve is going to be challenged. I stealthily pop a few M & M’s into my mouth and fix my stare on the image in front of me as the title of the film comes into view. 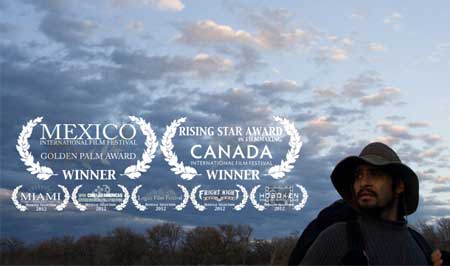 02:45: The first few minutes of the film take place in a car driving to a location in the lowlands near a mountain in Belize. There are three men in the car: Mauro Bosque, Chucho & the driver (Who remains nameless). Chucho is the producer of the series “Hombre Y Tierra” & Mauro is the star/host. They are filming a short intro to the latest episode of the series and immediately I see that Mauro is a bit of a petulant, spoiled, self-important individual that has a highly elevated opinion of himself. Mauro explains to the audience that he attempted this trip before but heavy rainfall cut his attempt short. But this time he waited until the rainy season has passed and nothing is going to stop him because he is Mauro Bosque and this is “Hombre Y Tierra”. He has an annoying habit of repeating that to the camera every other minute or so with a wink of his eye. I already dislike him…

02:55: After some arguing (& reconciling) with Chucho about the path he’s going to take on his journey Mauro set off with a backpack and a small camera to chronicle his journey. The both of them agree on a meeting point and Chucho drives off to wait for Mauro. Mauro has begun to film his show and explains to the camera that he has given himself two days to meet Chucho as he walks upon land that (He claims) hasn’t been walked on since the ancient Mayans lived here. What I see is a man standing in a forest talking…and talking…and starting all over again because he’s flubbed a line. I take my first sip of tea and begin to worry.

03:25: My head snaps up after I fell asleep for a few minutes. Sweat has formed on my brow and my once cold bottle of tea has gotten warm. Someone has snuck into my room & helped themselves to more than a few of my M & M’s but luckily whomever it was missed my potato chips. I curse the thief and get up to turn on my fan. Cool air blows against my face as I rewind the film a bit to see what I missed. All I see is Mauro walking through the forest talking to the camera. A few scenes just feature him walking silently. Surely something must have happened while I slept but no…I check and re-check. Nothing has happened other than Mauro getting frustrated because of a tree blocking his path which makes him take…another route!I hear some sounds outside of my door but I ignore them as I resolve to stay awake and watch this movie.

03:35: Out of M & M’s. Who took them? I’m not too sure but I get up and quietly lock my door. Down to about half a bottle of tea but I’m rationing it pretty well & still have a full bag of chips. The sounds outside of my door seem to have intensified some but I don’t sense any imminent danger. The movie? Well admittedly my eyes are growing weary of watching Mauro walk through the forest (Which I am beginning to suspect is someone’s backyard) but I have kept them open. Sadly my ears have pretty much given up listening to him as all he’s doing is talking about how to use a compass and what he’s expecting to find. WHOA! What was that? A sudden loud boom has surprised Mauro…where did it come from? Why does he just decide that it’s no big deal and keep on walking? I mean he’s all alone in this forest isn’t he? There isn’t anything nearby that could make that sound…is there? I silently open up my bag of chips & sit up straight, sensing that he’s about to get attacked by some aliens or maybe some wild animals. Maybe insects? Yeah, yeah…he’s gonna get attacked by a cloud of bees that are the product of some sinister experiments by the local mad scientist who just so happens to have a lab in the middle of the forest. Heh, that’s gotta be it…it just has to be. 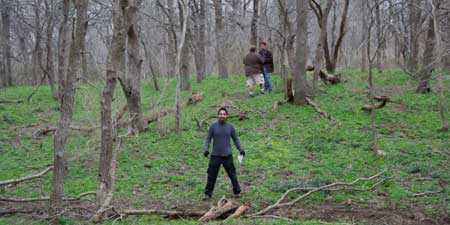 03:40: Well, Mauro has set up a tent in the forest and is preparing to get some sleep. Luckily he has the light from the camera to allow him to see where he is. Unluckily he’s in the middle of nowhere and it’s really dark. He’s admitting to being a little scared but since he’s Mauro Bosque and this is “Hombre Y Tierra” he’s ready for whatever awaits him. I went through my bag of chips in eager anticipation of a titanic battle between Mauro and….something but I got nothing but more talk of his adventure and the importance of being prepared for any emergency when undertaking as perilous journey as he is. I start to guzzle down my tea because the tartness of my salt & vinegar chips has puckered my lips and dried my throat but I stopped myself before I drank it all. I have about 1/4 bottle left and I have to conserve it. The sounds outside of my door have quieted but still I remain essentially motionless…whatever’s out there might be listening.

03:45: Bathroom break! As I wash my hands the cool water invigorates me. I splash some of it on my face as I look in the mirror and see….MAURO BOSQUE? NOOOOOO! Suddenly I awaken in a fevered sweat…my bottle of tea is gone, my fan has been turned off and somehow my door has been unlocked! I quietly rise to my feet and tiptoe to my door. I hear voices from the other side but I can’t make out what they’re saying. Dare I crack open the door & take a peek? Nope…I’m gonna toss some water onto my face and refresh myself.

The movie? Oh yeah, I was watching a movie wasn’t I? Heck…all I see is some guy in the forest talking about shaving without a razor or water. Was I supposed to review this thing? I better start paying attention then.

03:55: I rewind the film to see if I missed anything. Looks like Mauro is losing his mind but he soldiers on looking for the spot where he’s supposed to meet Chucho. Whole lot of talking going on between Mauro and no one in particular. Seems like he’s lost his backpack too, wonder how that happened? Oh wait! He’s found the spot where Chucho is supposed to be waiting for him…I guess the movie is over huh?

Nope. No Chucho but there are some crayon sketches on a cave wall that Mauro identifies as Mayan hieroglyphics, pretty smart cookie that Mauro is. Hey…there’s some blood over there, and some bones & Chucho’s jacket…Where’s Chucho? My right eye is twitching madly now. The movie seems to be ending but my mind refuses to believe that it’s just watched nearly 90 minutes of a man walking through a forest listening to the sound of his own voice while trying to keep his shoes dry. I feel woozy. Disoriented. Vulnerable…. 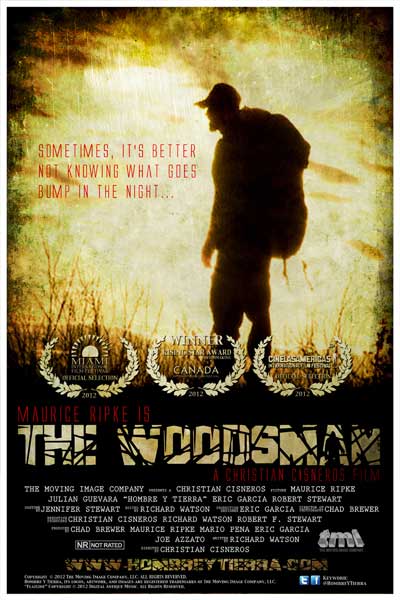 08:74: Clock doesn’t seem to be working. Mauro is still talking…visions of Cthulu and Spongebob Squarepants harass my sensibilities.

Mauro is throwing rocks at something in the dark of night and laughing hysterically. I hear myself laughing as well but my mouth isn’t open. Hey…when did I take a scalpel to my gut? Where’s my kidney?
No worries, I found it! Jessica Alba is here and she found it next to the toilet. I must’ve left it there when I went looking for some water. I’m not thirsty so I guess I found some water somewhere. She’s so purty….

Movee is ovuh. Someting dragged My main man Mauro off into the brush. Wonduh wha it was though…
OH SNAP! I jus saw some heiry legs walk acros the screen. Im guessin that’s whut got poor Mauro. Dang it! I wondur what it wuz? Im so hungree rite now. Hey Jezica, could yu make me a sanwich? I luvvvv u ms. aLba.